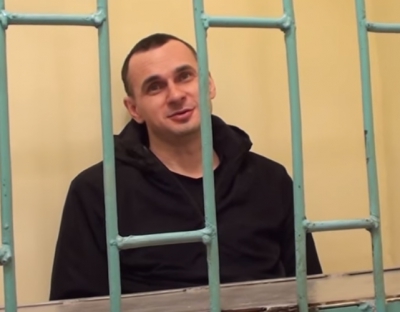 It is not only Kremlin-backed militants who hold their hostages in basements.  Two human rights activists have found Ukrainian film director and political prisoner in a Chelyabinsk SIZO [remand prison] where he had been held for almost a week, since his arrival on Feb 19, in a basement.  The cell was for four people but  holding 12, which one of the two visitors says is normal.   Before that he had been held in a Samara SIZO, also in a basement.

Sentsov’s health has obviously suffered, and he has a bad cold.  He tells the visitors, however, that everything’s fine and that he’s “travelling around Russia and its prisons”.  He is quite emphatic, however, that there is no system of justice in Russia.  The women understand who Sentsov is, and even point out that he doesn’t look like a terrorist, but clearly have difficulty knowing what to say.  What do you talk about with a world renowned Ukrainian filmmaker held behind Russian bars on his way to one of the furthest prisons the authorities could find to serve a 20-year sentence for literally nothing, except opposition to Russia’s invasion and occupation of Crimea?

The video can be viewed here:  https://youtube.com/watch?v=IbOxHYJ9jJA

It will soon be a month since Sentsov and civic activist Oleksandr Kostenko were taken to prisons in the far east of Russia, knocking any hope that Moscow might choose to mark the first anniversary of the Minsk II agreement by actually complying with it.

The plan is clearly to hold both men in prisons as far from their lawyers and the public eye as possible.  Kolchenko, whom the women promised to look for, is likely to be held in a maximum security prison in Chelyabinsk, while Sentsov is not headed for Irkutsk as everybody was originally told, but the Yakutia region in the Far East.   This period of transfer is particularly gruelling and also dangerous, since the men’s lawyers are deprived of any contact with their clients.

Sentsov and Kolchenko have both been recognized as political prisoners by the Memorial Human Rights Centre and their trial and sentences (to 20 years and 10, respectively) described by renowned Russian human rights defenders as ‘ideologically motivated terror’ against opponents of Russia’s invasion and annexation of Crimea.  Their release is required by the Minsk Agreement and has been repeatedly demanded by European structures and all democratic countries.

Radio Svoboda’s Crimean Service spoke with Kolchenko’s lawyer Svetlana Sidorkina and Sentsov main lawyer Dmitry Dinze about possible ways to get the men back to Ukraine.

Both Minsk Accords require the exchange of all prisoners and persons illegally held on an all for all basis.   During his Dec 17, 2015 televised press conference, Russian President Vladimir Putin chose to ignore this, pointing out that all exchanges must be “of equal value”.  The UNIAN reporter had reeled off (a small part of) a considerable list of Ukrainians held in Russia, while mentioning only the two Russian military intelligence officers captured during a militant attack on Ukrainian soldiers in the Luhansk oblast.   Putin was clearly referring to the numerical difference, not to the crucial distinction, namely that all the Ukrainians are hostages and most have been recognized as political prisoners, unlike the two Russian service men fighting in a country Russia claims not to be at war with.

Svetlana Sidorkina believes that any exchange involving Sentsov and Kolchenko on the one hand, and the two Russians – Yevgeny Yerofeyev and Aleksandr Aleksandrov – on the other will be possible only after the verdict is handed down on the latter.  Their trial is continuing, with the two men now denying that they were serving Russian officers, although this conflicts with what they told everybody, including Russian journalists and the OSCE, during the first month and more after their capture (see More evidence that captured Russians were military intelligence officers

Both Sidorkina and Dinze hope to organize for Sentsov and Kolchenko to be released to serve their sentence in Ukraine.  Although Russia has tried to ‘automatically’ force Russian citizenship on them, they remain Ukrainian nationals and there are bilateral agreements which allow for such transfer.

Both lawyers are understandably reticent about anything but the formal procedure for such applications.  They are, however, both critical of Ukraine’s authorities for not being more proactive in their support for the men.  Dinze positively states that “if Ukraine in this situation was more active, we would have already initiated all mechanisms needed for Sentsov to be sent to that same Ukraine to serve his sentence.”  Dinze spoke of action needed by Ukraine’s Justice Ministry, Interior Ministry and the Prosecutor General’s Office.

Deputy Justice Minister Serhiy Petukhov rejected the criticism, saying that it is a long process to obtain all the necessary documents for Sentsov, Kolchenko and also Gennady Afanasyev.

Petukhov also cited Russia’s refusal to extradite Khaiser Dzhemiliev to Ukraine and said that this indicates that Russia is not ready to make concessions at present.  The situation with the son of veteran Crimean Tatar leader Mustafa Dzhemiliev is a little different.  It is, however, true that nothing in Russia’s treatment of Ukrainians held in Russian prisons suggests willingness to hand over these hostages.

A cassation appeal is also being due to be submitted shortly, with Dinze rating its chances of success at 50-50.  All depends, he adds, on the political situation in Russia.

Sentsov, Kolchenko and two other Crimeans who opposed Russia’s invasion and annexation of their homeland  – Gennady Afanasyev and Oleksy Chirniy - were arrested in May 2014, and held incommunicado for weeks before being taken to Russia, when on May 30 the FSB or Russian Security Service claimed that they had been involved in a ‘Right Sector terrorist plot’.  There was nothing to indicate any presence of the ultra-nationalist Right Sector in Crimea, and the idea that Kolchenko, who is a committed left-wing anarchist would have taken part in a far-right movement’s ‘plot’ was absurd.