Dutch referendum puts Ukraine in spotlightHow a democratic tool became a threat to democracyPlaying with fear and ignoranceFormer Soviet political prisoners call on Holland to say yes to Ukraine’s European futureUkraine: The case for ’voor’ in the Dutch ReferendumAppeal by the leaders of Ukrainian national communities to the Dutch populationUkrainian PEN asks Dutch colleagues to support a YES voteCrimean Resistance to Russian Aggression and Moscow’s Savage Revenge Global Rights of pecaeful People press conference The HagueRussia tells ECHR that it didn’t annex Crimea & accuses Ukraine & West of ‘fake evidence”Poland charges three with terrorism & sees Russian link in arson attack on Hungarian Centre in UkraineWhat is Happening around Babyn Yar Today?Five Ways We Have Changed the World’s Perception of UkraineEU Formally Approves Ukraine Association AgreementRussia’s war on George Soros goes globalSix Outrageous Lies Russian Disinformation Peddled about Europe in 2016Trump, Brexit, and the Myth of Ukrainian NationalismBellingcat says Russia used ‘fake evidence’ to point finger at Kyiv in downing of MH17Alternative report on the implementation of the International Convention on the Elimination of All Forms of Racial Discrimination by UkraineWhy Has a Former Soviet Dissident Gone on Hunger-Strike in Britain?
• Topics / Politics and human rights

Ukrainian Jewish leaders appeal to Holland: Give our country the chance to break with the past 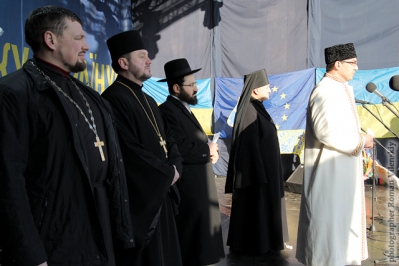 Ecumenical Service during Euromaidan on Dec 29, 2013

Prominent Jewish religious and civic leaders have addressed a moving appeal to the people of the Netherlands who are due to shortly vote in a referendum on whether to ratify the EU-Ukraine Association Agreement.  It was Viktor Yanukovych’s decision to reject that agreement which prompted Ukrainians from all backgrounds to come out onto the streets in the Euromaidan protests, resulting in what has become known as the Revolution of Dignity.   While the Dutch referendum is not binding on the government, a vote against ratification would be a blow to Ukrainians and a gift to eurosceptics who are currently receiving strong support from Russia.

Both during Euromaidan and later, the Yanukovych regime and Moscow waged a major propaganda campaign to convince people in Ukraine and abroad that the Euromaidan activists were a bunch of far-right anti-Semitic ‘fascists’.  On March 3, Russian President Vladimir Putin tried to justify Russia’s invasion of Crimea by claiming that this was a reaction to the "rampage of reactionary, nationalist and anti-Semitic forces" in Kyiv.

The Jewish community in Ukraine actively condemned such distortions then and it again sets the record straight in this appeal to the people of the Netherlands.

“Ukraine, together with its Jewish community, which is one of the largest in Europe, is living through one of the most dramatic moments in its history. For the first time in hundreds of years of co-existence in this multinational land, the country has gained the chance to create a political nation.  This chance is the result of the victory of civil society, a victory in which Ukrainian Jews played a major role, over the authoritarian and corrupt regime of ex-President Yanukovych.

Ukraine has one of the lowest levels of anti-Semitic behaviour in Europe.  Preparations are underway for fitting remembrance activities to mark the 75th anniversary of the Babi Yar Massacre, and the lessons from the Holocaust are taught in many large and small cities in Ukraine.  Jewish public life has been re-established during the years since Ukraine gained Independence and there are dozens of Jewish schools, synagogues and charitable organizations. “

The authors stress that Jews were united with ethnic Ukrainians, Crimean Tatars, Russians, Armenians and others on Euromaidan demonstrations throughout Ukraine two years ago in upholding their European choice.

“That choice is based on the principles of democracy, tolerance, equality of all before the law and observance of inalienable human rights. Many paid the highest price for this, sacrificing their lives.”  They mention the first two activists killed in Kyiv.  Serhiy Nigoyan was himself born in Ukraine, but of Armenian parents who had fled the fighting in Nagorny Karabakh shortly before his birth.  Mikhail Zhyznevsky was a Belarusian who had lived in Ukraine for many years.  Those killed included Ukrainian Jews – Josif Shilling from Drohobych; Oleksandr Shcherbanyuk from Chernivtsi and Yevhen Kotlyar, an environmental activist from Kharkiv.  Jewish people, the authors stress, are also involved in defending and building a new European Ukraine.

It was their selflessness, the authors write, that has enabled Ukraine to take a road travelled by other peoples in Europe, leading to the formation of a political nation.  Jews have lived in Ukraine for many centuries, they add, and relations have not always been good, and a lot can be said about persecution and discrimination.

“Ratification of the EU-Ukraine Association Agreement will be a symbolic departure from the past.  It will embolden millions of Ukrainians of different nationalities and faiths to build a just society by following the path that the Netherlands took after the Eighty Year War when it gained independence from the Spanish.

The authors stress that ratification does not mean membership of the EU, only association, but this will enable Ukraine to firmly follow a European vector of development and finally break free of Russia’s dictate.

They ask all Dutch people to take part in the April 6 referendum and to vote for the EU-Ukraine Association Agreement.  By doing so they “will give our young democracy, which has been achieved at such a high price, a chance for peace, stability and prosperity in our common European home”.

The appeal has been endorsed by a formidable number of Ukrainian Jewish associations (see the list below).

Andriy Adamovych and Josif Zisels, Co-Presidents of the Association of Jewish Organizations and Communities of Ukraine;

Leonid Finberg, Director of the Centre for Studies of the East European Jewish Culture and History

Viktoria Hodik, Chair of the Board of the Ukrainian Union of Jewish Students;

Artem Kobzan, Acting President of the Zionist Federation of Ukraine;

Arkady Monastyrsky, President of the Jewish Forum of Ukraine;

Anatoly Podolsky, Director of the Ukrainian Centre for Holocaust Studies;

Petro Rashkovsky, Head of the Association of Jewish Communities of Small Cities in Ukraine;

Rabbi Meir Stambler, President of the Federation of Jewish Communities of Ukraine;

Alina Teplytska, Director of the Federation of Jewish Communities of Ukraine;

Mykhailo Tkach, Director of the United Jewish Community of Ukraine;

Yevhen Ziskind, Executive Director of the Association of Jewish Religious Communities of Ukraine