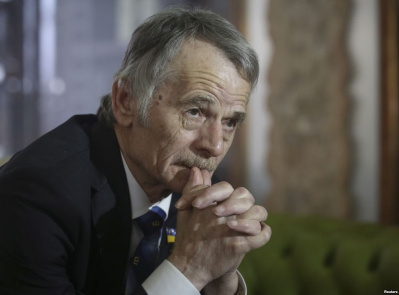 If Russia declares the Crimean Tatar Mejlis, or representative body of the indigenous people of Crimea ‘extremist’, around 2, 300 members of Crimean Tatar self-government structures could be in immediate danger.

According to veteran Crimean Tatar leader Mustafa Dzhemiliev, for all the repressive nature of the Soviet regime, there were no cases of disappearances.  It was not like now in Russian-occupied Crimea when Islam Dzhepparov, the 19-year-old son of a Crimean Tatar rights activist and his cousin could be abducted and taken away, and simply never seen again.  When there is scarcely any pretence of investigation into the abduction and hideous death through torture of lone protester Reshat Ametov despite video footage showing his abductors.

Dzhemiliev has long pointed out the specific contempt for the law demonstrated by the current regime in Russia, and the 72-year-old certainly has plenty to compare it with.  He was just 6 months old when the entire Crimean Tatar people were deported from Crimea in May 1944 and has devoted most of his life to peacefully upholding the rights of his people and human rights generally.  That commitment cost him 15 years in Soviet labour camps.  Less than 2 months after Russia’s invasion and annexation, he was banned from entering his native Crimea.  Russia has since demonstrated particular cynicism by initiating criminal charges against him for trying back on May 3, 2014 to enter Crimea.  It is also using his son Khaiser as a hostage, and holding him in a Russian prison.

Dzhemiliev himself, and the events on May 3, 2014, are among the pretexts Russia is using to try to ban the Mejlis, or Crimean Tatar representative body, claiming it to be ‘extremist’.

In an interview on the eve of the first, preliminary hearing into this planned ban, Mustafa Dzhemiliev spoke of the reasons for Russia’s antagonism towards the Mejlis and its leaders, and the likely consequences of a ban.

“The Mejlis is the last organized bastion of resistance to the occupation. They tried for a long time to break it down, bribe it with promises of posts, blackmail it.  It didn’t work.   Then they set about trying to clone the bodies of national self-government, calling a new national congress of the Qurultay [Crimean Tatar national congress] and electing a ‘mejlis’ which was to the occupiers’ liking.  That also failed. The overwhelming majority refused to have any part of this ‘Qurultay’.  No Qurultay on occupied territory can be considered legitimate. »

They have now turned to creating their own puppet organizations, such as Kyyrym Birligi.  Dzhemiliev notes that the leader of this organization Seitumer Nimetullaev is wanted in mainland Ukraine on suspicion of large-scale embezzlement.  There is also Kyyrym, led by Remz Ilyasov.

This, he says, is a parody of the Mejlis, and even if they ban the Mejlis, such organizations will not, as Russia is hoping, be accepted by Crimean Tatars.  These are people, he adds, who “are collaborating with the occupiers, and in moral isolation from the people”.

The Mejlis’ strength is in its representative nature, in the fact that it is elected by the people.

The attempts Mustafa Dzhemiliev speaks of to override the Mejlis are continuing in parallel to the attempt to ban it.  On March 5, the website 15 Minutes reported the creation of something called ‘TOS, or ‘territorial bodies of self-government’ which are clearly being used to try to push out local mejlises.  Once again, the person pushing for these, Teyfuk Gafarov is a person expelled from the Mejlis back in 2014 for his willingness to collaborate with the occupiers.

Like others, Mustafa Dzhemiliev predicts that the ban of the Mejlis will lead to an escalation in repression.

The Russian regime has already demonstrated that you don’t need to have committed any offence to face repression.

Dzhemiliev cites the situation with alleged members of the pan-Islamic movement Hizb ut-Tahrir which Russia has decided is terrorist.  Hizb ut-Tahrir is a legal organization in Ukraine and although Dzhemiliev does not especially like the organization which he says divides Muslims into the ‘right’ and ‘wrong’ kind, its adherents are neither extremist nor terrorist.

That, however, is of no interest to Russia.  The Memorial Human Rights Centre in fact declares all those convicted of ‘terrorism’ purely on the grounds of involvement in Hizb ut-Tahrir political prisoners.

There are now 8 people in Crimea facing such charges, with it highly questionable in a number of the cases whether the men in fact have anything to do with Hizb ut-Tahrir.

The same principle will doubtless be used against members of the Mejlis.  If Russia declares this representative body of the main indigenous people of Crimea to be ‘extremist’, then the members of the Mejlis will be in immediate danger of arrest.  Including local mejlises, Dzhemiliev says that around 2, 300 people involved in all structures of Crimean Tatar self-government could be at risk.

Dzhemiliev points out that under the Soviet regime the national movement of Crimean Tatars was also not recognized.  The same labels were used, and repressive measures applied.  However “you had to do something to get imprisoned. It wasn’t enough to take part in the national movement.  They had to find some prohibited material falling under Article 190 – possession and circulation of material defaming the Soviet state and political system.  This is now an innovation of modern Russia that they can arrest you simply for being a member of the Mejlis. .. From the point of view of repression, the Russian Federation is much more insidious and vile than the USSR”.

There was a procedure, he points out.  Yes, a person who opposed the Soviet regime would certainly be arrested. But procedure was followed: a court, defence, and definitely being sent to a camp.  “And now people can simply disappear”.

Or they can find themselves declared ‘extremists’.  Here Mustafa Dzhemiliev says that at one level there is nothing that can be done.  Those 33 members of the Mejlis (as well as Deputy Head of the Mejlis Akhtem Chiygoz who has been imprisoned now for 14 months) will not leave Crimea.

Crimean Tatars will however be waging a major campaign in the West to increase political pressure including through extending personal and sectoral sanctions.

Mustafa Dzhemiliev was speaking before the court hearing on March 3.  This proved to be a preliminary hearing and the Mejlis have received time until March 10 to read the material presented by the de facto prosecutor Natalya Poklonskaya to justify the application.

Pressure from all western bodies, governments and NGOs is urgently needed now while there is still time.