How a democratic tool became a threat to democracyUkrainian Jewish leaders appeal to Holland: Give our country the chance to break with the pastDutch referendum puts Ukraine in spotlightFormer Soviet political prisoners call on Holland to say yes to Ukraine’s European futureUkraine: The case for ’voor’ in the Dutch ReferendumAppeal by the leaders of Ukrainian national communities to the Dutch populationUkrainian PEN asks Dutch colleagues to support a YES voteCrimean Resistance to Russian Aggression and Moscow’s Savage Revenge Russia tells ECHR that it didn’t annex Crimea & accuses Ukraine & West of ‘fake evidence”Poland charges three with terrorism & sees Russian link in arson attack on Hungarian Centre in UkraineWhat is Happening around Babyn Yar Today?Five Ways We Have Changed the World’s Perception of UkraineEU Formally Approves Ukraine Association AgreementRussia’s war on George Soros goes globalSix Outrageous Lies Russian Disinformation Peddled about Europe in 2016Trump, Brexit, and the Myth of Ukrainian NationalismBellingcat says Russia used ‘fake evidence’ to point finger at Kyiv in downing of MH17Alternative report on the implementation of the International Convention on the Elimination of All Forms of Racial Discrimination by UkraineWhy Has a Former Soviet Dissident Gone on Hunger-Strike in Britain?What Now For Ukraine’s EU Association Agreement?
• Topics / Politics and human rights

Playing with fear and ignorance 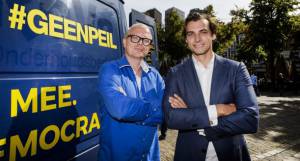 One of the organizers of the referendum in the Netherlands on the EU-Ukraine Association Agreement is a man called Thierry Baudet. Relatively young (33 years of age), energetic, eloquent and not unattractive, he knows exactly how to use his personal skills to put his message across. What that message is, is not fully clear, because Baudet openly asserts that he is not only an “academic” and “the foremost intellectual in The Netherlands” (how modest), but also that he is a provocateur who wishes to stimulate debate and trigger people to think and express themselves. The result is that during meetings at his “Forum for Democracy” rather distasteful opinions are expressed, but that is all part of the game”. This is “new democracy”, as Baudet puts it, a democracy in which the layer of outdated and redundant politicians are cast aside and the people have a direct way to express their opinions. And when those opinions become distasteful, Baudet looks the other way and says he only “provided a forum.” How handy.

Baudet is not an exception in the new political arena in Europe. Rather, he is an exponent of what seems to be ahead. Indeed, the rise of social media and the disappearance of the “filter” that used to exist between society and mass media, has propelled people like Baudet to key positions. He, like others, “smelled” that these new fora had unending possibilities, and cleverly made use of them.

It is not all negative, that I wish to make clear from the very start. Maidan was partially a success thanks to the unending possibilities of social media. Without the constant posts on facebook and other social media, without the permanent livesteams showing people what was happening at Maidan right here and now, without the multiple communication links possible because of new technology, Maidan would never have been able to survive the onslaught by governmental forces. I will never forget the night of February 19-20, several hours before the shooting that left dozens of Maidanovtsy dead, when it was possible to post photos and videos on internet because of free wifi at Maidan. Absolutely crazy; while grenades exploded around, fires roared and shots could be heard at regular intervals, Maidan had free internet…

What makes Baudet and the like dangerous, is the fact that they purposely trigger the “underbelly feelings” of the population. These feelings are based largely on one primal human instinct: fear. I do not wish to think people are fundamentally bad. In spite of overwhelming evidence to the contrary, I do everything possible to prevent myself from thinking that and try to maintain a positive inclination. However, one thing is crystal clear: people are afraid. Now, anno 2016, people in Europe are afraid of globalization, they are afraid of losing their jobs and comfortable lives, they are afraid of the influx of foreigners who challenge everything that is known and safe and who might “steal their jobs”.

This atmosphere is a heaven for populists. Among those you have crude ones, like the abject Dutch populist Geert Wilders or the French Marianne Le Pen, but actually more dangerous is a man like Thierry Baudet who pretends to be an intellectual who know what he is talking about, but in fact doesn’t.

Take Ukraine. Baudet is against the Association Agreement between Ukraine and the EU, and sees is as opening the doors to corruption, millions of Ukrainian fortune-seekers, and as a measure that unnecessarily irritates Putin with unforeseen consequences. Baudet talks about Ukraine as if he just came back and has a through understanding of the place. Yet in reality: he has never been there. This person, who wants to obstruct the integration of Ukraine into the “common European House”, as Mikhail Gorbachev called it, has actually never set foot in Ukraine himself. Everything he says is based on hearsay. He has not even been to the country as an observer for an organization like the OCSE, like at least one of the other opponents of the agreement, and who base their opinion on rather quick and superficial contact with a limited group of people.

But that is not all. He and his environment continuously point out that there are actually many Ukrainians who do not want to link up to Europe, and who would like things to remain the way they are. They promote this position as if they are talking about a standard society, the type of society they know and where they grew up. Yet they don’t have any understanding of the post-totalitarian situation, where people are still recovering from a 75-year long trauma and any change creates anxiety, fear, and the wish that everything would remain the way it is.

That does not mean these people don’t want change: they do, but at the same time they fear it because it creates more uncertainty. These people you can find all over the former USSR, in all 15 former Soviet republics, and there is nothing you can do about it. These people have reached their “ceiling of change”, pushing them further does not lead anywhere. New generations need to take over, de-Sovietized ones, and that is a matter of a natural process that unfortunately takes a lot of time. Yet at the same time it is clear there is only one way, and that is the way forward, out of the Soviet disaster, the disaster into which Putin over the past years managed to pull Russia back, with rather horrible consequences.

A few days ago I posted a video from Russian-occupied Simferopol, made last summer. A guy on a stage in one of the city parks is singing love songs to Stalin, the mass murderer who is guilty of at least 20 million deaths. Citizens sit, listen, sing along, clap… and yet we all know that probably all of them have at least one relative who fell victim to Stalin’s repression. Strange? No, not at all. These people suffer from a collective trauma that makes them praise their torturer, because that might be the best road to survival. Horrible? Yes, it is, because when Crimea returns to Ukraine these same people will be singing the Ukrainian national anthem and profess their allegiance to the Ukrainian state…

These are things Baudet doesn’t understand. And my guess is he doesn’t even want to understand. They are too complicated, too much disturbing for his intellectual games that have no link to reality except that they faultlessly trigger the fears among the general population.