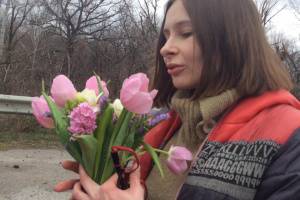 The separatists would tell Maria Varfolomeyeva that she had "resort conditions" in her captivity. "As if, when you don’t get beaten up, that’s a resort, " she said.

Three days after Varfolomeyeva’s release, Ukrainian news portal Levy Bereg spoke to the journalist in her hospital room in Kyiv about her detention and captivity, which began more than a year ago.

Members of the Russia-backed separatist group that calls itself the "Luhansk People’s Republic" detained her outside of a residential building, which another journalist asked Varfolomeyeva to photograph. Thinking there was no danger, Varfolomeyeva said she took photos of the house and tried to confirm its address with the people who emerged from the building.

"They looked at me completely stunned.... ’Come with us, ’ they said.... They were wearing civilian clothes, but inside there were people with assault rifles.... Turns out it was pretty much [the Luhansk separatists’] general staff headquarters, " Varfolomeyeva said in the interview.

Yuriy Aseyev, the journalist who purportedly asked her to take photos, claimed Varfolomeyeva knew well what the assignment was and the dangers it entailed. Aseyev allegedly told her not to risk her life for this.

"I watched the video of Maria’s interrogation released by [the separatists] and understood that she did exactly the opposite [from what I had told her], " Aseyev said in an interview with Ukraine’s Fakty newspaper.

Varfolomeyeva claimed that Aseyev was lying. "He came to the exchange [of prisoners], but I couldn’t look him in the eye, " she said. "I still can’t understand how one could have done so."

’I’ve Been In All The Cellars’

After detaining and questioning Varfolomeyeva, the separatists found a photo of the woman wearing the radical organization Right Sector’s kerchief and showing off a business card in the Right Sector’s signature red and black colors. Besides looking through her social networks, the separatists also searched her house and took everything, she said, "even a tent."

Varfolomeyeva said that at first they assured her that she would soon be let go. Later, however, the separatists’ so-called interior minister said on TV that they had detained a dangerous criminal -- in reference to Varfolomeyeva.

"It was like a zoo that doesn’t have an elephant because it can’t afford one, but there is a pony with fake ears and trunk. The unsophisticated public will eat it up, " the journalist said. "’Look, she has the Right Sector symbols. It means she isn’t just a member, but a coordinator.’"

During 419 days of captivity, the Luhansk separatists reportedly moved Varfolomeyeva frequently from one building to another, from one cellar to the next. "All the basements in [separatist-controlled parts of Luhansk] are mine, I’ve been everywhere, " she said.

At the beginning of her captivity, Varfolomeyeva was often interrogated, she said. Separatists wanted her to give up passwords and safe houses. "I didn’t know anything at all. I told them, ’I could make them up, if you want, I could confess to murdering Kennedy, ’" she said.

The separatists used psychological pressure, but Varfolomeyeva didn’t mention any physical torture. "They would put a gun to my head, to my knee, these huge men, and would start shouting that they will cripple me. They didn’t shoot. But the threats with the gun were very realistic, " she said.

In time, however, she said, their attitudes toward her changed significantly. "When one exchange fell through, then the other, they told me: ’Don’t worry, everything will be alright. Hang on.’ They couldn’t find the right words, but they tried, surprisingly, " she said.

The separatists would tell Varfolomeyeva that she had "resort conditions" in her captivity. "As if, when you don’t get beaten up, that’s a resort, " she said.

Many of her cellmates, however, weren’t so lucky.

Fighters from the group’s security arm claimed not to beat people up, Varfolomeyeva said. "But those who left for interrogations would come back with broken ribs, hematomas. The halls were just ’very slippery; people fell, ’" she said she was told.

The separatists tortured some captives by attaching generators to their ears, Varfolomeyeva said. "They call it ’phoning [U.S. President Barack] Obama.’"

While in captivity, Varfolomeyeva tried to keep herself busy, including by studying French, Italian, and German, and read books that her father sent her. She was not allowed to go outside except to be moved.

"If I calculate how much time I spent outside in a year -- it would be about 24 hours, " she said.

Varfolomeyeva is reportedly recovering in the capital, Kyiv. In the Bereg interview, she said she was unsure about what to do next.

But the same day the conversation was published, Varfolomeyeva was said to have been offered a job at one of the biggest Ukrainian TV channels, 1+1. The anchor of the evening news made the announcement on air.

"We are proud to call our colleague a person who wasn’t broken by militants’ cellars, who betrayed neither her principles nor her country in the ordeal."