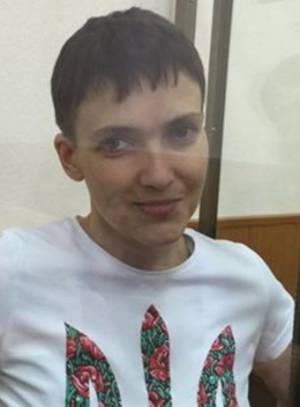 If you imagined that Russia’s leaders couldn’t plummet any lower, think again.  Sergei Lavrov, Russian Foreign Minister has explained that they reneged on the agreement to allow Ukrainian doctors to examine Savchenko because of her “defiant behaviour” in court and “her insulting pronouncements addressed at the court”.   This, Lavrov told his Ukrainian counterpart Pavlo Klimkin had made it impossible to keep the agreement they made “as an exception, out of humanitarian principles”.   Ukraine’s Foreign Ministry was blunt in calling the refusal to allow Nadiya Savchenko to see her family and doctors “reprisal”.

It was a dangerous one at that.  Savchenko has been on a dry hunger strike since Friday and clearly needs to be monitored by doctors whom she trusts. She had previously threatened to refuse even water after the sentence was announced,   but was angered by the totally unwarranted postponement of her final address to the court.   Suspicion that the delay was because of the number of diplomats and international correspondents present was only strengthened on Tuesday by the detention yet again of Ukrainian journalists from Ukraine’s TV STB as they tried to get to Russian Donetsk.  Three Ukrainian MPs were stopped at Sheremetyevo Airport in Moscow, and only released after their flight to the city had departed.  Radio Svoboda reports that only specific film crews were allowed into the courtroom.  The three mentioned – Pyervy Kanal, Rossiya and Zvezda are all among the most notorious channels for pro-Kremlin propaganda.  Other reporters were forced to watch the proceedings from a different room.

Any fears (or Russian hopes?) that after five days without even water, Savchenko would be too weak to even attend the hearing, let alone give her final address were dispelled.  A full translation of Nadiya Savchenko’s address has been made by Maidan Translations.  Savchenko spoke in Ukrainian and the translator mostly just read out what had been prepared the previous week.  There were however a couple of additions, and it was one of these that so riled the court.  At one moment she got on the bench and positively insisted that the translator add her gesture – using her middle finger to express her contempt of the farce of a trial. 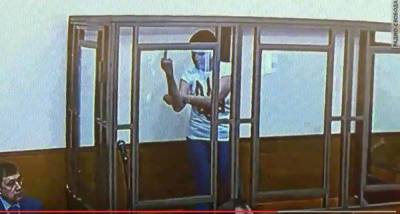 The judge tried to reprimand her, but she pointed out that the final word is a right she has to give without interruption.

Savchenko ended by saying that she would continue her dry hunger strike if the verdict was delayed by more than a week.  It has been announced for March 21, although nobody seriously believes that this is a real verdict, and that the three judges - presiding judge Leonid Stepanenko, Ali Khaibulaev and Yevgeny Chernysh will be doing more than signing their names to a verdict handed to them from above.

Their names, together with those of the prosecutors who have demanded 23 years, are surely on the list of 29 names, including that of Russian President Vladimir Putin, on a ‘Savchenko List’ prepared by 57 members of the European Parliament.  The MEPs have demanded personal sanctions against them for being "responsible for the political decision to kidnap" Savchenko, to "transport her to the territory of Russia, detain her unlawfully, and fabricate charges against her"

The EU statement reiterated that Savchenko’s release is part of the agreements reached at Minsk.  All prisoners and “persons unlawfully held” are to be released on an all for all basis.  This has been totally ignored by both Russia and its proxies in Donbas.

The EU also stresses that “Russia bears responsibility for the health, well-being and observance of the human rights of all persons it detains.”  It had always seemed likely that Russia would resort to force feeding although Nadiya Savchenko has expressed stated that she regards any such interference as torture and violence against her. In fact, however, it was learned on Thursday morning that Savchenko has herself decided to stop the dry hunger strike and resume taking liquids.

While calls are heard from all world leaders to release Savchenko, Russia has continued the pretence that a court trial is underway, and that any such calls are “pressure on the court”  Dmitry Peskov, Putin’s press secretary, is reported as saying that “we cannot agree with attempts to interfere with court proceedings which take place in our country in strict compliance with current Russian legislation”.

Nadiya Savchenko was captured by Kremlin-backed militants in Ukraine on June 17, 2014 and taken by force to Russia.  This is nowhere allowed for by ‘current Russian legislation’, so the Russian Investigative Committee first claimed that Savchenko had escaped from the militants, and hurtled to the Russian border to cross it “illegally”.  They then changed this version, claiming that she had been released by the militants, though she was still supposed to have decided, in camouflage gear, to “illegally cross the border”.  As well as 23 years, the prosecutors have separately demanded a fine for this alleged breach of border control.

Militant leader Igor Plotnitsky, whose evidence is critical, and obviously flawed, was permitted to give testimony in total secrecy.

The court has repeatedly rejected evidence confirming Savchenko’s alibi and / or proving that the prosecution’s attempts to overturn this evidence are falsified.

The prosecution claims that Savchenko climbed up a television tower and, at a distance of around 2.5 kilometres noticed the journalists and informed members of the Aidar volunteer battalion of their location.  Neither the binoculars nor the radio system that the prosecution alleges were used to do this have been produced.  There is no explanation as to how Savchenko, who had a serious arm injury, could have climbed the tower.

Savchenko had already been captured by Kremlin-backed militants in the Luhansk oblast when the two journalists were killed.  The defence is able to prove from mobile telephone records and witness reports that Savchenko was captured at around 10 a.m., around an hour and a half before the two journalists came under fire.  The defence had, from the outset, publicly spoken of its evidence and the prosecution came up with a ‘witness’ who claimed that there were technical problems on the day in question, and that the evidence from Savchenko’s phone was therefore unreliable.

There are multiple such examples of Russia’s supposed “strict compliance” with its own legislation.