Amnesty International’s call for Savchenko ’retrial’ is worse than silence 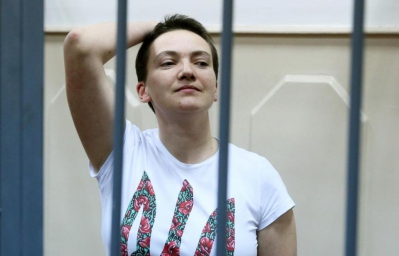 The official verdict in the Russian trial of Ukrainian former military pilot and MP Nadiya Savchenko is only to be announced on Tuesday, although the many Russian and western media who reported that she had been found guilty were probably only technically wrong.  The reaction from Amnesty International, however, was not just off-base on technicalities.

In a statement released in the morning, John Dalhuisen, AI’s Director for Europe and Central Asia said that “the case of Ukrainian helicopter pilot Nadiya Savchenko, found guilty of murder today by a court in southern Russia, must go immediately for a fair retrial.”

The trial was certainly flawed and politicized, however the call for “a full and impartial investigation into her allegations and a retrial that remains free of political interference and complies with international fair trial standards” is at best offensively meaningless.

At worst, it can seriously mislead people into ignoring the basic facts that a Ukrainian MP and former soldier is being tried in Russia after being captured in Ukraine by Kremlin-backed militants and taken against her will to Russia.

If AI has noticed how flawed the trial was, it must surely understand how flawed the demand for a retrial is.  A retrial in which country?  AI’s silence on the problem here is not new.  In its latest annual report, Savchenko is given a couple of sentences only under the section on Russia, with no mention at all of the fact that Savchenko was effectively a prisoner of war in Ukraine, yet is imprisoned and on trial in Russia.  One of the charges against her is the quite nonsensical accusation that she illegally crossed into Russia.

The same annual report has virtually nothing about a number of other Ukrainian nationals imprisoned in Crimea or Russia on gravely flawed charges.

This silence is particularly disturbing given the substantial work carried out by the Russian Memorial Human Rights Centre and the fact that it has declared many of those detained political prisoners.  Where it has not, this is mostly because the cases are not over, or were so secret that nothing is known.

Memorial HRC did, however, declare Savchenko a political prisoner back in October 2014.  The Russian human rights organization had no doubt back then that Savchenko had been taken to Russia during the night from 23 to 24 June 2014.

Their grounds for declaring Savchenko a political prisoner included the nature of the prosecution which was for a long time part of a huge criminal case initiated by Russia’s Investigative Committee against unidentified Ukrainian soldiers, fighters from ‘Right Sector’, etc. for supposedly “using prohibited means and methods of warfare on the territory of the Donetsk and Luhansk people’s republics” [sic], as well as abductions and killings of various journalists and a case initiated against Ukrainian officials.

This resulted in absurdities such as the claim in the Savchenko indictment that 18 thousand interrogations had been carried out.

Memorial notes that “this criminal case is part of a political and information campaign by the Russian authorities against Ukraine after the change in regime in Kyiv in February 2014”.

While recognizing that indiscriminate fire from either side must be thoroughly investigated, the very decisions passed in the Savchenko case, the language used (such as the reference to the “territory of the Donetsk and Luhansk people’s republics”) indicates the obvious political engagement of those involved in taking such decisions.  Memorial HRC provides other examples which, it says, show the evident bias of representatives of the authority and the fact that they share the position of the ‘separatists’.

The original indictment gives clear indication of political motivation behind the charges with Savchenko also accused of taking part in military action as part of the Aidar Battalion.

Unlike AI, Memorial does not ignore the implications of Savchenko being a Ukrainian national. It finds the fact that the Russian Prosecutor General is not responding to official requests for information from Ukraine regarding criminal proceedings over Savchenko’s abduction to also demonstrate that this prosecution does not serve the aims set out in Russia’s Criminal Procedure Code.

“There are serious grounds for believing that Nadiya Savchenko was illegally abducted from Ukraine and until her formal detention as accused was illegally held by force on Russian territory and subjected to interrogation as a witness”.

Some details in the indictment have changed since October 2014, but the basic premises of the Memorial HRC statement remain relevant now, and extremely obvious.

There is considerable evidence that Savchenko had been captured well before the two journalists were killed.  This has just been confirmed by one of the militants in an interview to Meduza, however there is also compelling evidence linked with the billing from Savchenko’s telephone.

That evidence was announced from the beginning.  It resulted in the prosecution coming up with a ‘witness’ - Mikhail Pomazan - who claimed that there had been technical problems on the day in question, and that the evidence from Savchenko’s phone was therefore unreliable.  The defence received a response from the company in question saying that they had never had an employee of that name, and therefore demanded that ‘Pomazan’ be summoned for cross examination.  Despite the obvious validity of such an application,  the judge rejected it, refused to add the letters the defence received to the file, and the written testimony was simply read out.

This was the level of the ‘trial’ seen during hearing after hearing, the political nature of which was evident not only to Memorial, but to numerous former Soviet political prisoners who called for Savchenko to be freed and allowed to return home to Ukraine.  Savchenko’s release, together with that of all the Ukrainian nationals unlawfully held, is a requirement of the Minsk Agreement.  There have been repeated calls for her release from all international structures and democratic countries.

If Amnesty International was endeavouring to be even-handed by calling for a ‘retrial’, silence would have been better.  And its silence over almost all the Ukrainian prisoners imprisoned or facing kangaroo trials in Russia was already betrayal of Amnesty principles.