Threats against Crimean political prisoner sentenced to 14 years for pleading innocent Russia forced to ‘change the status’ of occupied Crimea because of sanctions PACE finalizes capitulation to Russia, while listing all reasons why this is appeasement Two-year sentence on ‘defamation’ charges for writing about Russian occupiers of Crimea Bandera. An Invitation to a Calmer ConversationNext, Russia will come for the children Moscow’s proxy ‘republics’ announce that Donbas is and always was ‘Russian’Ukraine’s religious freedom crushed in Russian proxy Donbas ‘republics’The practice of application of Article 111 of the Criminal Code of UkraineMPs challenged to fight Russian repression by adopting a Ukrainian political prisonerCriminal proceedings under Article 111 of CC of Ukraine against the journalistsRussia ‘sells’ plundered Crimean Massandra winery to Putin oligarch cronyRussia passes grotesque 19-year sentence against head of Crimean Tatar TV ATRPutin signs ‘law’ imposing 10-year sentence for ending Russia’s occupation of CrimeaCrimean children taught that Russia didn’t invade Crimea and that Ukraine was an accidentCrimean Tatar political prisoner with dangerous Covid-19 symptoms thrown into punishment cellPolice summons for Briton who criticized Sheremet murder case as Avakov’s ‘public show’Ukraine arrests Crimean turncoat implicated in persecution of Crimean TatarsRussian ‘pride’ over invasion and annexation of Crimea is fading fastRussia ‘sells’ plundered Ukrainian heritage in occupied Crimea
• Topics / Politics and human rights 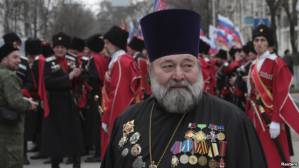 A Russian Orthodox priest attends a rally marking the second anniversary of Russia’s annexation of Ukraine’s Crimea region in the Black Sea port of Sevastopol on March 18.

For many in Crimea, the Ukrainian Black Sea peninsula’s takeover by Russia two years ago was a cause for joy and great expectations.

In the run-up to the March 16, 2014, referendum in Crimea -- which has not been recognized as legitimate by the international community -- Moscow and pro-Russian figures on the peninsula promised locals a glittering and prosperous future that would contrast sharply with the fates of Ukrainians under the control of what the Kremlin branded the "fascist junta" in Kyiv.

Two years after the annexation, however, many of Russia’s promises remain unfulfilled. Although many Crimeans feel that the annexation saved the peninsula from the kind of violence that has wracked parts of eastern Ukraine – which is what they were told by Moscow -- many continue to wait for the living-standard improvements they were led to expect.

Among the most prominent promises was the pledge of a genuinely multiethnic and multiconfessional region with three official languages -- Russian, Ukrainian, and Crimean Tatar.

Russian President Vladimir Putin himself made this explicit pledge in his speech to the Russian parliament on March 18, 2014:

"We treat all nationalities living in Crimea with respect, " Putin said. "It is their common home, their little motherland. Thus it would be right -- and I know that people in Crimea support this idea -- to introduce three official languages in Crimea: Russian, Ukrainian, and Crimean Tatar."

This promise is also enshrined in Article 10 of the Crimean constitution adopted in December 2014 by the Russian authorities that control the peninsula.

The reality over the last two years, however, has been quite different.

"In commerce, in everyday life, in education, there is no equality of languages in Crimea, " says local activist Veldar Shukurdzhiyev of the Ukrainian Cultural Center. "It exists only formally, on paper."

The Organization for Security and Cooperation in Europe (OSCE) wrote in a report last summer: "Instruction in Ukrainian and the study of Ukrainian is being restricted in Crimea because of pressure on school administrations, teachers, parents, and children with the goal ending the teaching of Ukrainian. This could in the future lead to the limitation of Ukrainian culture and language on the peninsula. Teaching in Crimean Tatar and the study of Crimean Tatar is encountering restrictions and problems because of the annexation and is in need of support and regeneration."

The story with the Russian-installed administration’s economic promises has been mixed. Officials pledged to reduce the retirement age and increase pensions and salaries for state-sector workers and this has been largely accomplished. Immediately after annexation, pensions and state-sector salaries were raised 25 percent per month until they reached Russian standards.

"But immediately prices began to increase and sanctions were imposed, both international and Ukrainian, " says local economic reporter Andriy Yanitskiy. "In 2015, Russia reindexed its pensions and its salaries and things turned out to be not as attractive as had been promised."

The United States, the European Union, and other countries have imposed sanctions on Russia over the annexation of Crimea and its support for separatists in eastern Ukraine.

Yanitskiy notes that some key social groups -- military and security forces, pensioners, administrative officials, and top managers -- have benefited enormously because they constitute "the foundation of the Russian regime in Crimea." He estimates that the city administration in the port city of Sevastopol has swollen to more than 2, 000 employees and "they all have good salaries."

"But, at the same time, Crimea prices today are higher than prices in Kyiv, " he concludes. "You need to take into account the purchasing power of those salaries -- how many groceries they can buy and what quality goods are available."

Moreover, the pay raises have largely reached only top administrators of state institutions like schools and hospitals.

"Average teachers and doctors don’t get such impressive salaries, " Yanitskiy says. "On top of this, there have been problems with service personnel in schools and hospitals getting their salaries at all."

According to the Russian government, average wages in Crimea are lower than those of almost any region of Russia.

Russian officials also promised that annexation would be a boon to Crimea’s tourism industry and that commercial flights would be started from Sevastopol’s Belbek airport in the summer of 2014. The plan to begin such flights has now been postponed until late spring of this year.

And Russian officials have said the level of service at Crimean resorts is below national standards.

Government activity in the tourism sector has been largely limited to the redistribution and privatization of resorts, including resorts that were the private property of Ukrainian citizens.

Pro-Russian authorities also promised in 2014 to end Crimea’s reliance on the rest of Ukraine for the lion’s share of its water. Russian Prime Minister Dmitry Medvedev announced a plan to build a desalination plant, new reservoirs, and a water pipeline from Russia’s Kuban region.

No progress has been made on any of these initiatives and Crimea’s water has been supplied by pumping out deep aquifers, a strategy that environmentalists warn will result in disaster.

Sevastopol’s pro-Russian administration head Aleksei Chaly pledged to build in his city a technology center comparable to Silicon Valley. Putin himself endorsed the 2 billion ruble plan, but no work on the project has begun.

As for the ongoing construction of a bridge across the Kerch Strait to link Crimea with Russia, Yanitskiy is somewhat more optimistic.

"I can believe they will actually finish the Kerch bridge because it is an ideological project, sort of Russia’s Great Pyramid, " he says. "But, by the way, Russia has been building a bridge across the Amur River to link China and Russia since 1995. But with Kerch, there is no choice -- without it, maintaining Crimea is very expensive."