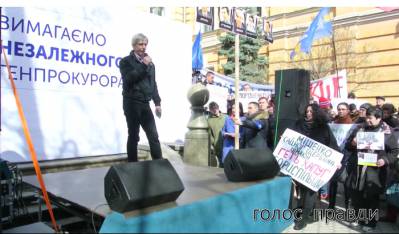 The reasons for dissatisfaction with Shokin are legion, including his blocking of reform of the prosecutor’s office and of anti-corruption measures.  The immediate impetus was however the news that a court in Kyiv had allowed investigators from the Prosecutor General’s Office to remove documents and other items from the Anti-Corruption Action Centre [AntAC].  This was, incredibly, claimed to be part of an investigation into the disappearance of money donated by US and European partners for reforming the prosecutor’s service  (see Prosecutor General’s Office obtains carte blanche to raid anti-corruption NGO).

That and the increasing indications that Shokin’s apparent resignation might be nothing of the sort.  Given criticism beyond Ukraine, this would seriously damage confidence, already challenged, in the government’s commitment to reform.

Among those protesting on Sunday were members of the Advocates Advisory Council who represent the families of Nebesna Sotnya, those killed during Euromaidan.  At a recent press conference, they, the relatives and civic activists publicly demanded an end to behind-the-scenes bargaining and an open competition for the post of Ukraine’s Prosecutor General.  Political parties have demonstrated that they are not up to the task.

Oleksandra Matviychuk, Coordinator of Euromaidan SOS,  pointed out, that all three prosecutor generals so far (Oleh Makhnitsky; Vitaly Yarema; Viktor Shokin) had failed to carry out the tasks they promised on taking office.  All claimed that they would return the assets plundered by Viktor Yanukovych and his people; that they would carry out a proper investigation into Euromaidan crimes and bring those responsible to answer; and that there would be real reform of the prosecutor’s office.

The activists asked that the candidacy of Serhiy Horbatyuk be considered, since any progress made in investigating Maidan crimes is thanks to him and the Special Investigation Department which he has headed since late 2014.

Ominously, over the last week Horbatyuk was offered a post in Lviv.  He rejected it and there was outrage among civic activists who interpreted this as an effort to isolate one of the few people in the Prosecutor General’s Office who has achieved progress and who inspires public confidence.

Another was Vitaly Kasko who recently resigned in disgust.  Back in November last year, Kasko had said that “while the Prosecutor General spends so much time in the President’s Administration, we will not create either a European prosecutor’s office or a European state.”

Confidence that Ukraine’s leaders even want this is wearing thin.