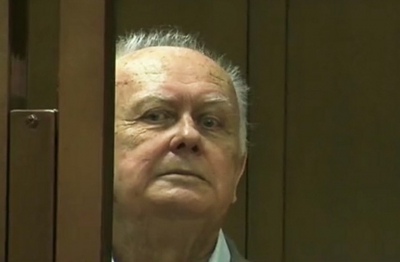 Yury Soloshenko, the 73-year-old Ukrainian pensioner sentenced by a Russian court to 6 years imprisonment on absurd ‘spying’ charges has been moved from the prison medical unit to an ordinary cell.  The elderly Ukrainian is suffering from cancer and heart problems.

There is no way that a person in Soloshenko’s condition can be receiving the necessary medical care in ordinary Russian prison conditions.

Ukraine’s Foreign Ministry has issued a strong statement of protest and says that Russia is deliberately dragging out its consideration of the appeal for a pardon despite manifest humanitarian considerations and the direct threat to Soloshenko’s life.

The Ministry recently lodged a formal request for the extradition of Yury Soloshenko, as well as Oleg Sentsov, Olexander Kolchenko, Gennady Afanasyev and Oleksy Chirniy, the four opponents of Russia’s annexation of Crimea sentenced to long terms of imprisonment for non-existent ‘terrorism’.

Yury Soloshenko will be turning 74 at the beginning of May.  He has not seen his family and much loved grandchildren since he was seized on arriving in Moscow in August 2014.

He was diagnosed with cancer very recently, however has been in poor health from the outset.  This did not prevent Putin from rejecting Soloshenko’s appeal for a pardon back in November last year.

Zoya Svetova, a human rights activist with long experience of visiting Russian prisoners, has said that she had never seen such flagrant violation of Russia’s Constitution as in Soloshenko’s case.

The most brazen abuse of his rights and of the law was seen in the situation with his lawyer.  He and his family had asked well-known human rights lawyer Ivan Pavlov to represent him.  The Russian investigators clearly understood that Pavlov would defend his client and quite simply prevented him from seeing him. While all Pavlov’s efforts failed, Soloshenko was himself put under immense pressure to accept a ‘lawyer’ provided by the investigators. It seems clear that this lawyer, Gennady Blokhin encouraged him to ‘confess’, promising that he would be returned to Ukraine.

Yury Soloshenko has written that the letters he receives are an enormous boost, helping him to endure “this monstrous injustice”   In a previous letter he wrote of his  longing for his Ukrainian homeland, his love of every blade of grass, every leaf, and his horror at a Russian justice system which is lavish with long prison sentences, with many, like him, totally innocent.