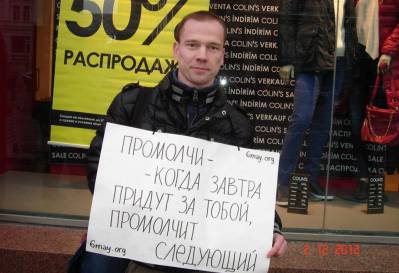 Stay silent.  Tomorrow, when they come for you, the next person will say nothing

A Moscow court has rejected Ildar Dadin’s appeal against his three-year prison sentence under a draconian anti-protest law.  The sentence was merely reduced by 6 months, with this still leaving it longer than the 2 years demanded by the prosecutor.

Judge Natalya Borisova from the Moscow City Court had rejected Dadin’s application to be present in court, and his final words were spoken by video link from the SIZO [remand prison].

Dadin was represented by well-known lawyer Henry Reznik who pointed out that putting a peaceful demonstrator behind bars is a blow to the country’s prestige.  “This case if of state importance. Will the state tolerate the peaceful assertion of views.  There is no place for peaceful demonstrators behind bars.  It is an affront to the law”.

Reznik also stressed that the new anti-protest law is in total conflict with Russia’s Constitution which guarantees freedom of peaceful assembly.

A new Article 212.1 of the Russian Criminal Code was introduced in July 2014.  It is in grave breach of Russia’s Constitution and legislation, as well as the European Convention on Human Rights to which Russia is a party.  It imposes double punishment for the same actions, first via administrative legislation, then criminal.

Dadin was accused of taking part in protests on Aug 6, Aug 23, Sept 13 and Dec 5 2014.   He is the first victim of this new attack on the constitutionally guaranteed right of peaceful assembly, and it seems likely that the severe punishment was because of Ildar’s active support for Euromaidan and for Ukrainian political prisoners held in Russia.

During the trial both the investigators and the court made much of Dadin’s position on the so-called ‘Ukrainian question’, as well as his visits to Ukraine.  He was supposed to have visited Kyiv three times “in order to gain skills in opposing the police”.

The investigators also tried to claim that Dadin had established contact with members of  the ultra-nationalist Right Sector which Russia has systematically demonized since Euromaidan.  The only ‘evidence’ for such claims was a ‘business card’ supposedly from Dmytro Yarosh, the head at the time of Right Sector.  The card was almost certainly one of the humorous responses to Russia’s Foreign Ministry claims in April 2014 that Right Sector had been involved in a shootout near Kremlin-backed militant-controlled Sloviansk.   The remarkably intact business card had purportedly been found in a totally gutted out car.  This prompted a wave of hilarious Yarosh card memes on the Internet.   The prosecution in Dadin’s case treated the card seriously, and claimed that Dadin had it for Yarosh’s contact details.

There were about 100 people at the court.  Some refused to leave the hall set aside for hearing the proceedings by video, and were beaten by court guards, seemingly because they refused to leave in protest.

In St. Petersburg, the authorities refused to allow a meeting in support of Dadin.  A flash mob was attempted instead, with people standing holding photos of Ildar.  Even that ended with at least three people detained.