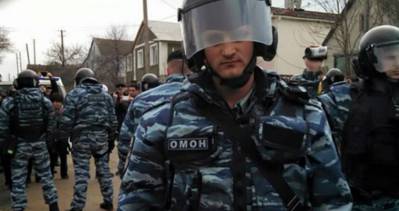 "They are instilling terror in people, “trying to turn them into slaves afraid of their own shadow, the sound of their own voice.  Take a step to the left, to the right and its interrogation, prison, threats, the powerlessness of adults, the terrorized eyes of children”.

At least 35 Crimean Tatars were detained on Friday evening after armed men in masks burst into a café outside Simferopol.  Crimean Tatars were openly targeted, with people in the cafe “of Slavonic appearance” ignored.  All those detained were taken to the so-called Centre for Countering Extremism, and released around 4 hours later.  No charges were laid and there does not seem to have been any specific point to the questioning yet all those detained had their fingerprints and DNA samples taken.

In the present information vacuum deliberately created by Russia following its invasion and annexation of Crimea, it is extremely hard to get accurate information.   The Bagdad café near Simferopol is non-alcoholic, and it seems that all those seized by the armed men were Crimean Tatar Muslims.  According to a correspondent from the pro-Kremlin Komsomolskaya Pravda, men in masks from the same ‘counter-extremism’ unit turned up at three cafes in the centre of Simferopol.  The KP report says that virtually everybody was taken away from one café, but that the officers simply asked people to go with them.  The 15Minutes website, which Russia has just blocked, quotes a source as saying that the officers refused to say why people were being taken away, just that they could detain them for 3 hours.

Ilmi Umerov, from the Crimean Tatar Mejlis [representative assembly] says that the situation in Russian-occupied Crimea is such that you don’t particularly ask what the reason is since there is always something happening.

Eskender Bariev, Coordinator of the Crimean Tatar Rights Committee, believes that such measures are aimed at preventing people from gathering in groups of more than about 5 people.  “This is an obvious message aimed at intimidating people”.

Aider Muzhdabayev has addressed an appeal to Ukraine’s leaders demanding that they react in the strongest form to what he calls “pure ethnic repression” against Crimean Tatars.  The world must wake up to the methods that are being used against all Crimean Tatars.  They are instilling terror in people, “trying to turn them into slaves afraid of their own shadow, the sound of their own voice.  Take a step to the left, to the right and its interrogation, prison, threats, the powerlessness of adults, the terrorized eyes of children”.

A major search operation by armed and masked men was undertaken on Feb 10 and 11 this year.  The searches were carried out in very rough, aggressive manner.  In one home in Yalta, armed men in balaclavas broke down the door and windows although nobody had tried to show any resistance.  The windows were smashed with the glass shattering over three children asleep in the room.

Damir Minadirov had torture methods used against him after he pointed to the numerous infringements of procedure during the search and attempted to exert his rights.

At least 11 men were taken away for questioning and four remain in custody, including Emir-Huseyn Kuku, a well-known human rights activist.  The charges of ‘terrorism’ against them and against four other Crimean Tatars in custody now for well over a year are of immense concern.  All are charged with ‘terrorism’ over alleged involvement in the Hizb ut-Tahrir pan-Islamic movement which is legal in Ukraine and most countries.  Russia’s Supreme Court declared it ‘terrorist’ without providing any grounds, and there have since been a large number of long sentences against people who have done nothing wrong, and who may not even be members of the movement.  The Memorial Human Rights Centre considers all those imprisoned merely for membership of Hizb ut-Tahrir to be political prisoners  (see: Russia’s Invented ‘Terrorism’ and its Crimean Muslim Victims )