Russian deputy charged with incitement to hatred after criticizing PutinSo can you annex a country’s territory & jail those who criticize this for ‘separatism’?3-year sentence for criticizing Putin and Russia’s annexation of Crimea5 years imprisonment for criticizing Crimean annexation and Putin?Poet labelled ‘terrorist’, flung off Wikipedia for verse in support of UkraineRussian teacher on trial for poem against annexation of CrimeaKaliningrad ’flag prisoners’ charged with insulting the veterans Moscow rejects7 years for raising flag in protest at Russian invasion of CrimeaKaliningrad FSB finds ‘deep offence’ in a German flagRussia, the improbable human rights crusaderPutin’s selective terrorismPro-Russian thugs beat up Ukrainian unity demonstrators – except on Russian TVArmed men cut off Ukrainian channels in DonbasDonetsk television station seized to provide "correct" - Russian - coverageMoscow’s “Voice of the People” in SlovyanskMurdered in SlovyanskUS journalist released, others still held hostage in SlovyanskDonbas: abductions continue as Horlivka politician found murderedTwo journalists still held captive by Slovyansk militantsMore and more abductions in annexed Crimea
• Topics / News from the CIS countries 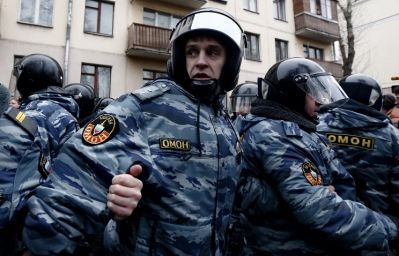 Officers of the newly created ‘National Guard’ will be allowed to shoot without warning according to the draft law which President Vladimir Putin has just submitted to the State Duma.  The new formation has already been created by presidential decree and the laws are essentially a formality.  Putin’s Press Secretary Dmitry Peskov has already made it clear that the fighters can be used against “unauthorized mass protests”.  In breach of Russia’s Constitution, the authorities regularly refuse to ‘authorize’ planned peaceful demonstrations and now armed National Guard will be used to disperse any courageous enough to still come out in protest, either at mounting repression or at the rising economic, social and environmental problems.  Peskov also saw fit to point out that the new measures have nothing to do with the elections later this year.  This supposed denial sounded rather like a threat.

The bill entitles members of the National Guard to “not warn of their intention to use physical force, special means or firearms if delay in using them could create a direct threat to the life and health of a member of the public or National Guard soldier or could cause other grave consequences”. What these other grave consequences are exactly is not clear, nor how it would later be determined whether the officer or somebody else really had been in danger.  In the USA, there are numerous cases where police officers who have shot and killed people (normally Afro-Americans) do not face prosecution.  Here forces brought in against protesters will be able to use weapons if they feel threatened.

There are some restrictions, such as a ban on using special means (tear gas, etc.)  against women who are obviously pregnant, people who are disabled or children.  The ban is supposed to also apply in the case of a large group of individuals if somebody else just there by chance could be hurt.

The ban, however, is limited and does not apply “in cases of armed resistance, of a group or other attacks threatening the life and health of members of the public or National Guard soldiers”.

Amoured vehicles and water cannons can also be used to disperse ‘mass disturbances’.

What the Russian authorities consider mass disturbances is always in question, and frequently depends on the political position of those involved in an action.  It is also believed that the disturbances on Bolotnaya Square in Moscow on May 6, 2012 in protest at Putin’s third term as President were exacerbated, if not caused, by the police deliberately sealing off the area.

National Guard soldiers will also be allowed to detain people and “where needed” enter people’s homes to do so.

The plans to create a single National Guard under single command were first announced on April 5.  They prompted Russian security specialist Mark Galleotti to ask what it says when Putin needs his own personal army.

The move, he says, indicates “big worries in a little circle. There is no real reason for creating the National Guard out of the Interior Troops (VV) and other forces unless you have a serious worry about public unrest. “

It is also highly significant that this will be directly subordinated to the government, without a minister in the way, he adds.  The new body, whom many Russians have dubbed Putin’s Oprichnina after the dreaded ‘police’ used under Ivan the Terrible, is to be headed by Viktor Zolotov who headed Putin’s own security guard [FSO] from 2000 to 2013.  Zolotov then went on to become the head of the Interior Forces who have long had at least some of the repressive powers given the National Guard.

Worth pointing out that Vadim Prokhorov, the lawyer representing the family of slain Kremlin critic Boris Nemtsov, specifically names Zolotov when asked who is blocking their attempts to obtain critical video footage from the bridge overlooking the Kremlin where Nemtsov was gunned down.  In an Open Russia interview, he named him as  a person whose interests are similar to those of the Chechens arrested on suspicion of carrying out the killing.  He calls Zolotov a patron and friend of Chechen leader Ramzan Kadyrov and asserts that if Kadyrov cannot get to see Putin, then Zolotov can always do it for him. 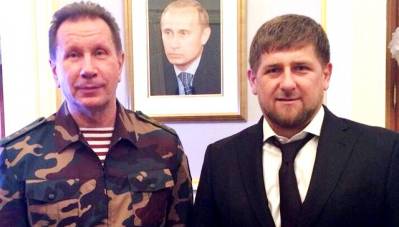 Prokhorov gave one other reason why he believed that Zolotov might be interested in blocking the investigation.  He mentioned a trip Zolotov made to Chechnya in August 2015 and how he and Kadyrov were seen animatedly discussing something.  He thought it might be means to deal with the investigators’ progress in finding a ‘Chechen trail’ (widely assumed to lead to Kadyrov).

In fact, with the new formation to be led by Zolotov another topic for animated discussion seems possible.

In his report Kadyrov: National Security Threat, Ilya Yashin, an associate and close friend of Boris Nemtsov, reported that Kadyrov himself has a personal army of up to 30 thousand men and that he was becoming so strong that Putin might have trouble getting rid of him.

The newly created National Guard under a Kadyrov ally seems to suggest that Putin is seeking to use similar methods.  Galleotti noted that the presence of Zolotov makes this “even more clearly a personal, presidential Praetorian force, under a maximalist loyalist. This may not only be a force to keep the masses in check, but also the elite.”

The move is also openly intimidating and it is certainly no accident that Peskov should have pulled no punches about the National Guard’s use to break up demonstrations.

Worth noting also that Olga Li, the Kursk deputy facing criminal charges after publicly criticising both the Kursk Governor and Putin, says that their survey found that support for Putin was only 25% (seeRussian deputy charged with incitement to hatred after criticizing Putin)

Crimean Tatars have resisted all attempts so far to provoke trouble, and there could be no legitimate grounds for calling on Putin’s National Guard.

Legitimacy is not something that worries Putin and his circle.