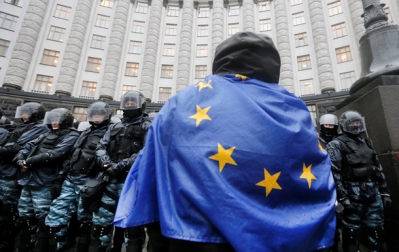 The Dutch government has promised to respect the result of the referendum on whether to ratify the EU-Ukraine Association Agreement.  As of Wednesday evening, it appears that around 32% voted, of whom 64% said ‘no’ to ratification.  At least 68% of the population did not take part at all, and even the organizers have recently admitted that Ukraine was simply a pretext to deal a blow to the EU which they want the Netherlands to leave.

A victory for democracy?

Carl Bildt has pointed out that the Association Agreement has already been approved by 29 democratic EU parliaments. Those voting No in Netherlands today are 0, 006% of electorate in EU."

A victory for Russian President Vladimir Putin, certainly, and a foretaste of what is to come since the Kremlin has scarcely concealed its support for political parties and movements seeking to destroy the EU.

It was Putin who in November 2013 bought the agreement of Ukraine’s then President Viktor Yankovych to renege on his election commitment to go ahead with the Association Agreement.  Yanukovych later publicly announced a huge 'loan' for Ukraine, but doubtless also received guarantees of assistance in ensuring that he would 'win' the next presidential elections.

With Prime Minister Mark Rutte stating that this allegedly democratic result means that they cannot ratify the Agreement, it is Putin who has won.

Together with the far-right and other euro-sceptic parties in Holland who are tonight celebrating their victory.

It is hard to find the words to express the sense of betrayal.  In November 2013, Ukrainians responded to the country’s leaders treachery by coming out in peaceful protest.

Worth recalling the reasons given by the Ukrainian Catholic University, one of a number of universities who actively supported their students.  Its statement said that the future of all 46 million Ukrainians was at stake but especially that of young people who were being deprived of a proper future within a Europe where there is rule of law, respect for human dignity and human rights

It was after young students on Maidan were savagely attacked by Berkut riot police on Nov 30 that hundreds of thousands of Ukrainians began in one way or another supporting that affirmation of Ukraine’s European future.

There were also the terrible yet moving occasions like the night into Dec 11 as Berkut was getting ready to storm the totally peaceful protest continuing in sub-zero conditions.  Throughout social networks, and via the bells of St Michael’s Monastery Kyiv residents were enjoined to come and defend Maidan.  By morning, thousands had arrived and the regime backed off.

And the days of horror, when unarmed activists were gunned down.

Over 100 people lost their lives.

Are those deaths, the persecution, and the individual acts of courage needed for each person to come out onto Maidan  to have no meaning because of a pseudo referendum with questionable motives and highly dubious funding?

According to strategic analyst Sibren de Jong, GeenPeil, one of the main organisers of the referendum claimed in a campaign flyer that “Ukraine is a country suffering from a civil war where fascist militias roam the streets”.

The author rightly notes that this narrative is that to be found on the Kremlin-funded RT, Sputnik News and all pro-Kremlin Russian media.

It was the narrative that Putin used to try to justify Russia’s invasion and annexation of Crimea and its military aggression in Donbas.  It was that military aggression that led to the downing of MH17 with the loss of 298 lives, with many of the victims from Holland.

They were lies used to justify killing and destruction.  They have now been used, it would seem, to make a mockery of all that suffering.