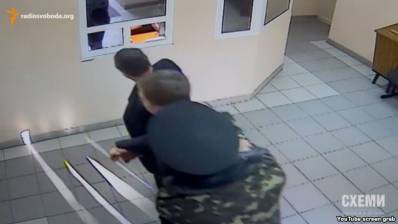 The new termination, on April 5, came after just one week.  This is hardly surprising since the Military Prosecutor’s Office entrusted the second ‘investigation’ to the same person - Ivan Dyachuk – as the first time around.  He effectively repeated his earlier conclusion, namely that there had been no element of a crime in the actions of the military servicemen working for the SBU.

Article 171 of Ukraine’s Criminal Code covers obstruction of journalists’ legitimate professional activities.  Paragraph 2 of this article imposes harsher penalties for obstruction carried out by officials.  This can in principle result in a sentence of up to 5-years restriction of liberty or 3 years being prohibited from holding certain posts.

This norm is seldom used, however the case in question was brazen, and the journalists will be appealing again.

The SBU is supposed to fight corruption, but it first set guards onto two investigative journalists from the program Skhemy: Corruption in Detail  then resorted to threats to try to prevent their program being broadcast.

Mykhailo Tkach and Kyril Lazarevych had spent weeks tracking the super-expensive cars that SBU employees come to work in and the secret car parks they use to avoid parking them immediately outside the SBU.  The program, produced jointly by Radio Svoboda and UTV-1, probed a level of luxury quite disproportionate to the salaries of SBU workers, and was clearly of public importance. 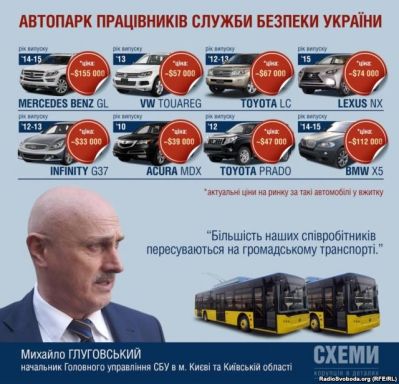 On Oct 2, 2015 they had just shown a press service employee their press ID when several individuals turned up and, without either identifying themselves or explaining their actions, began dragging the two men to SBU officers nearby.  Their video camera was damaged and they themselves treated roughly and “told to admit to spying”.  The journalists demanded in vain that the men identify themselves and that they be allowed to phone their lawyers.

Nobody was convinced.  Of 224 cases in the first 8 months of 2015 involving infringements of journalists’ rights, only six were investigated by the Prosecutor General’s Office and passed to the court.

The prosecutor’s initial termination of the investigation claims that the “the SBU military servicemen … did not realize that they were, with their actions, obstructing the legitimate professional activities of the journalists and did not intend to damage their video camera”.

There was one piece of good news on Jan 19, 2016 when the Pechersk District Court in Kyiv ruled that Tkach and Lazarevich had been detained and held unlawfully, and that the chief guard, identified only as Bondarev, had been guilty of exceeding his powers (an administrative offence).

The program in Ukrainian which identifies high-ranking officials and puts a price tag on their cars can be seen here.