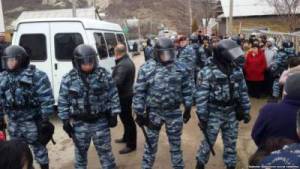 The warning from a well-known Russian analyst that Russia could be planning to use methods seen in the Caucasus to stage a provocation and then a bloody crackdown  against Crimean Tatars is difficult to dismiss, and not only because of the virulent propaganda campaign in the Russian and other pro-Kremlin media.  Russia is likely to criminalize the Crimean Tatar Mejlis [representative body] within days or weeks, claiming it to be ‘extremist’, and the occupation regime in Crimea is continuing to carry out armed searches of Crimean Tatar homes and arrests on spurious charges.  On the last such occasion, only Crimean Tatars visiting a non-alcoholic café were detained for several hours, interrogated and had fingerprints and DNA samples taken.  The measures are almost certainly aimed at creating the impression that Crimean Tatars and/or Crimean Muslims are ‘extremist’ and dangerous.

While Russia and the de facto Crimean prosecutor Natalya Poklonskaya constantly cite the Crimea Blockade to justify claims of ‘extremism’, the attempts to present Crimean Tatars as ‘radicals’ and dangerous extremists began within months of Russia’s invasion and annexation of Crimea.

After earlier exiling Crimean Tatar leaders Mustafa Dzhemiliev and Mejlis Head, Refat Chubarov, by September 2014 Russia had turned on the Mejlis itself.  Although banned from his homeland, Russia has also initiated criminal charges against Chubarov of ‘encroaching on Russia’s territorial integrity’ (by condemning Russia’s annexation of Ukrainian Crimea).  Chubarov’s Deputy Akhtem Chiygoz has been imprisoned since January 2015 on surreal charges.  Now, incredibly, Russia is planning to criminalize the self-governing body of the largest indigenous people of Crimea, with representative offices throughout the world.

The first highly inflammatory articles in the Russian media and claims of ‘Muslim radicalism’ began back in October 2014.  A year later, Dzhemiliev and Chubarov were accused of recruiting for Daesh.  There have been more and more reports in the Russian media.  Propaganda spin doctor Dmitry Kiselyov, for example, claimed on a mainstream Russian TV channel at the end of 2015 that Turkey might become  involved and send “hundreds of thousands” of Crimean Tatars from its diaspora to fight against Russia in Crimea.

It should be stressed that this is not merely media sensationalism.  Poklonskaya recently gave an interview to Russia’s RIA Novosti in which she made some quite extraordinary threats.

The interviewer’s question said it all, though the answer from a person fulfilling the role of prosecutor was worse.

“How great is the risk to Crimea from the Mejlis?”

“They have zero chance.  There’s no place for them here. We won’t let any extremists here, and if anybody wants to try their luck, then we have vacant cells.  There aren’t that many places, admittedly, but we’ll find them appropriate ones in Magadan or Kolyma.

We won’t let enemies into Crimea.  …. They can only shout and tell terrible stories, we won’t let them do all the rest”.

Asked about the moves to ban the Mejlis, she claims that they have been guided solely by “crimes committed by the leaders of the organization” and that the “Mejlis exists only to stir up the population, to carry out acts of sabotage, to propagate war, incite hatred” etc.

Geydar Dzhemal, a Russian political observer and the head of the Islamic  Committee of Russia, fears that Russia could be planning some kind of provocation as that in Nalchik in the Caucasus in 2005.  The Nalchik attacks were a disaster with 95 assailants killed (officially during the battle, according to lawyers and human rights activists, about half after being captured and in cold blood), as well as 35 federal forces and 14 civilians.

He points to the appearance of reports in the Russian media, like the above-mentioned by Kiselyov, claiming that young Crimean Tatar men are returning to Crimea from mainland Ukraine, following orders from Turkey, in order to start a revolt.   It is possible, he believes, that “in order to get rid of the Crimean Tatars, a similar provocation is being planned.  That is, to prompt a surge in the mounting indignation among Crimean Tatars caused by the violence, the disappearances, beatings, closed searches.  The same as what was carried out in Nalchik.  And to succeed in getting a few people, 100, etc., to follow a provocateur and then they’ll come down with full force in a massive and powerful special operation against the Crimean Tatars with huge loss of life”.

It was back in September 2014, after the abduction and/or disappearance of a number of young Crimean Tatars that Refat Chubarov first spoke of the analogy with the behaviour of Russian Federal forces in the Northern Caucasus.  Let’s hope that Dzhemal is wrong, but the similarities are chilling.