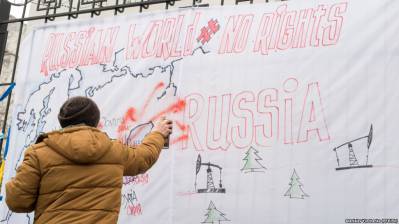 Two draft laws tabled in the Russian parliament have been described as setting the ground for Russia’s FSB to imprison people en masse on ‘extremism’ charges. The bills (№ 1039101-6 and № 1039149-6) are seen as having a good chance of being passed, and came just a day after Russian President Vladimir Putin created a ‘National Guard’ which will be able to shoot at protesters without warning to avoid perceived threats to life, health or “other grave consequences”.

Lev Ponomaryov, head of the NGO For Human Rights and a former Soviet political prisoner, writes that Russia is tightening the noose around the fragile neck of Russian civic society.  The penalties proposed are set to become much tougher while dangerously elastic ‘extremism’ articles of the Criminal Code are increasingly used to stifle dissent.

Tatar activist Rafis Kashapov, for example, is serving a three year sentence for criticism of Putin and Russia’s annexation of Crimea.  The material deemed to fall under ‘inciting hatred or enmity’ and ‘public calls to actions aimed at violating Russia’s territorial integrity’ can be viewed here.  Darya Polyudova was recently sentenced to 2 years for supposed calls to extremism and separatism.  Others would view her comments on social networks as merely criticism of Putin and the war in Ukraine.  The list can be continued.

While stringent measures are probably needed to fight real terrorism, Russia has used terrorism charges against ideological opponents in occupied Crimea, such as Ukrainian filmmaker Oleg Sentsov, and is also using them as a weapon of terror and intimidation against Crimean Muslims.

Ponomaryov notes that a hurried process is underway which could lead in the foreseeable future to a totalitarian ‘glorious future’.  The fact that the bills were tabled a day after Putin’s draft bill legislating the already created ‘National Guard’ is certainly no accident.

They were put forward by Irina Yarovaya, head of the Duma’s committee on security and Victor Ozerov, who holds the same post in the Council of the Federation, Russia’s upper house of parliament.  Alexander Verkhovsky, Director of the respected Sova Centre, which, above other things, monitors misuse of anti-extremist legislation, believes that the bills may be slightly modified, but will almost certainly be adopted.

The bills propose to sharply increase sentences under any articles of the Criminal Code linked with ‘extremism’ and terrorism.  Only imprisonment would be possible, for example, if a person was convicted of ‘inciting enmity’ Article 282); taking part in an extremist society (282.1); continuing activities of a banned organization (282.3).

That means that Yekaterina Vologzheninova, the 46-year-old solo parent from Yekaterinburg convicted of inciting enmity for reposting or ‘liking’ material critical of Russia’s annexation of Crimea and war in Donbas, would end up in prison, as would  Russian poet Alexander Byvshev.  So too would Olga Li, Kursk deputy and the mother of two small children, who is accused of inciting hatred of officialdom after issuing a video address criticizing Putin and the President-appointed governor of the region.

Under Russian occupation, these changes would also apply in Crimea where the Crimean Tatar Mejlis’ activities have just been ‘suspended’, with its ban as supposedly ‘extremist’ now seemingly a redundant fait accompli.  The Mejlis is an elected body recognized around the world as the representative assembly of the largest indigenous people in Crimea.  If the new law were to be applied, then membership of the Mejlis would lead to automatic imprisonment.

The bills also propose to reduce the age from which one can face criminal liability under the above-mentioned articles, “failure to inform of a crime” and others, to 14 years.

Other changes include equating the mass media and Internet.  Russia has already convicted a number of people for expressing their opinion on social networks, and Ponomaryov predicts that the change would effectively crush any freedom of expression in public.

The bills propose to criminalize something called “facilitating or drawing somebody into extremist activities” (becoming Article 282.4).  This could mean whatever the authorities saw fit,   Inviting somebody to join in a picket in defence of a park, for example.

Verkhovsky notes a particularly ominous element here.  A certain A. can draw B. into activities regarded as criminal. The relevant article would, however, stipulate that A. could avoid punishment by timely denunciation of B.  Verkhovsky is quite right in thinking he is not alone as seeing this as written specifically to facilitate acts of provocation.

The bills also propose a number of other reasons for banning somebody from leaving the country.  They would make it possible to impose a five-year ban on travel for anybody who had received a formal warning that an offence linked with ‘terrorism’ is inadmissible.

Worth noting that the supposed grounds for banning the Mejlis include the issue of such warnings about the inadmissibility of ‘extremist activities’.  No proof required, just the fact that somebody decided to issue a warning.

The very fear of receiving a ‘warning’ would be a powerful deterrent against any form of civic activism or expressing ‘dissident’ views.  Putin’s Press Secretary Dmitry Peskov was relatively open about the uses against protest of the President’s very own ‘National Guard’, with the headlines about shooting without warning, etc. sending a clear message.  These bills are, in their scope for abuse and repression, no less chilling.