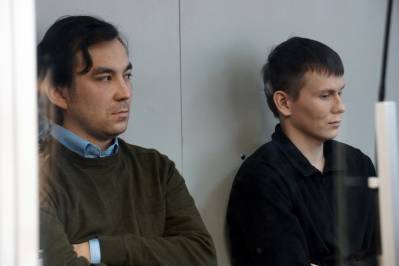 Two Russians who initially admitted to being military intelligence officers after an attack on a Ukrainian military unit in the Luhansk oblast have been sentenced to 14 years imprisonment with confiscation of property.  The Holosiyivsky District Court in Kyiv found that both Yevgeny Yerofeyev and Aleksandr Aleksandrov were guilty as charged of waging aggressive warfare, terrorism and smuggling arms  and issued a sentence only one year less than that demanded by the prosecutor.

It is a sentence that nobody seriously expects them to serve, with it widely assumed that they will be exchanged at least for Nadiya Savchenko, who has been on dry hunger strike for many days.  Mark Feygin, one of Savchenko’s lawyers, has, however,  pointed out that such predictions are, at very least, premature since the verdict will surely be appealed.  The men have one month to appeal.

The two men were taken prisoner near Shchastya in the Luhansk oblast on May 16 and are accused of having taken part in an attack on Ukrainian soldiers and SBU [Ukrainian Security Service] counter-intelligence officers, during which one Ukrainian soldier Vadim Pugachev was killed and three others injured.  Yerofeyev and Aleksandrov also sustained injuries.   They are charged with waging aggressive war, terrorism and smuggling arms.

Russia’s Defence Ministry, after initial silence, claimed that the men had left the military at the end of December 2014. This, it should be stressed, was originally denied by both men. They repeatedly confirmed that they were current Russian military servicemen.

During a meeting with the OSCE Monitoring Mission without Ukrainian authorities present, for example, they said that they were members of a Russian unit and had been on a reconnaissance mission.  “Both of them said they had been to Ukraine “on missions” before”.

Sergei Krivenko, a well-known Russian human rights activist and member of the Human Rights Council, then spoke with them on June 1.  In his report on the visit, he stated that Sergeant Aleksandrov and Captain Yerofeyev had denied Russia’s claim that they were no longer in military service and had asked for help in contacting their families as all phone numbers that they had were either blocked, or didn’t answer.  Both men categorically denied that they had been subjected to any form of torture or physical pressure, as was being claimed on Russian television.  Their main concern, Krivenko said, was that they were being prevented from contacting their families, and they were asking Krivenko and the Human Rights Council to help.

Pavel Kanygin from the Russian independent newspaper Novaya Gazeta first spoke to the men on May 22, then visited them again at the end of the month.  On the earlier occasion, he specifically mentions that he visited them after OSCE, the Red Cross, psychologists and a lawyer, and that he was able to talk to them one to one.  They expressed the same concern as to Krivenko, and in Kanygin’s presence tried yet again to contact their families.  Aleksandrov was also devastated by an interview which his wife gave to TV Rosssiya 24 in which she repeated the Defence Ministry’s line.

The Russian consul was also able to freely visit the men, and he has apparently been present at the trial hearings.

By the end of the summer, first Yerofeyev, and then much later Aleksandrov, changed their story.  Both now assert that they had left the Russian military and become members of the so-called ‘Luhansk people’s republic’ militia.

During the hearings, Mediazona reports, they refused to answer a huge number of questions.  Yerofeyev admitted to not having seen the order about his alleged decommissioning and refused to answer a question about the kind of contract he was supposed to have with the Kremlin-backed militants from the ‘LNR’.  Aleksandrov asserted that the military command had ended his contract a year earlier because he had “refused to serve”.

Yerofeyev claimed that the men had agreed to say that they were acting military intelligence officers to avoid extrajudicial reprisals.  He also asserts that they were put under pressure, giving “threats in a raised tone” and “slaps around the face” as examples.

For some time the trial was taking place (possibly deliberately on Ukraine’s part) in parallel with Russia’s trial of Nadiya Savchenko and it is therefore interesting to see the report on the latest hearings in Kyiv from Anton Naumlyuk who was present at much of the Savchenko trial.

Even the Russian consul, Alexei Gruby, is quoted as praising judge Mykola Didyk.  Naumlyuk in his turn notes that Didyk often interrupts the prosecutors, which is unheard of in “Russia’s practice of political trials” and has rejected some of the prosecution’s applications.

The trial was clouded by the murder of Yury Hrabovsky, the Ukrainian lawyer taken later after Aleksandrov changed his story and also claimed to have been with the militants (details here).

There was also a recent arson attack on the home of Judge Didyk, and he is now under police guard.  Naumlyuk says that one of the theories for that attack is that the judge agreed to hear testimony from the militants.  They were not willing to risk coming to Kyiv, but did speak by video link.

There is a considerable weight of evidence and witness testimony to back the assertion originally confirmed by the men that they were working for GRU, Russia’s military intelligence.  They were also captured with Russian weapons which the prosecution asserts could not be obtained ‘over the counter’.

Last summer, the men were desperate for contact with their families which was denied them.  They are hoping, as are very many others who want Russia’s Ukrainian hostages returned, that they will be part of an exchange.  While they now claim that they were placed under pressure by Ukraine – and repeated the same story to Russian and international observers – it is surely at least as likely that they would have seen repeating Moscow’s line as helping them to get home (and not face problems when there).