Sanctions, not words, needed over extrajudicial criminalization of the Crimean Tatar Mejlis 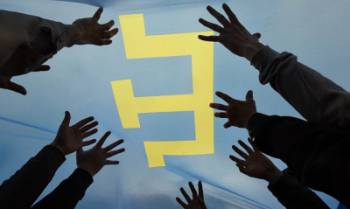 The Council of Europe’s recent report on Crimea might have seemed less bafflingly weak had it not coincided with the announced suspension of the Crimean Tatar Mejlis.  This criminalization of the representative assembly of the largest indigenous ethnic group in Crimea has now been confirmed by Russia’s Justice Ministry and surely requires reaction extending beyond words of protest and concern.

It should be noted that the report by Ambassador Gérard Stoudmann, while denying any “collective repressive policy against the Crimean Tatars as an ethnic group” did point to the “procedure aiming at declaring the Mejlis of the Crimean Tatar people an ‘extremist organisation’.  It stated that “should this lead to a court decision, that would indicate a new level of repression targeting the Crimean Tatar community as a whole”.

What if, as has now happened, the Russian occupiers decided to bypass the court altogether?  The postponements of court hearings mentioned in the CE report were thanks to the Mejlis and its lawyer refusing to back down in the face of such lawlessness and demanding their right to defence.  The court hearings were demonstrating the lack of any substance to the charges of ‘extremism’.  It was probably for this reason that first the de facto prosecutor Natalya Poklonskaya, and now the Russian justice ministry decided to dispense with the court altogether.

Poklonskaya announced the Mejlis’ suspension on April 11, and on April 18 Russia’s justice ministry added the Crimean Tatar Mejlis to its list of “civic or religious organizations whose activities have been suspended due to their extremist activities.”  The ministry message states that this is on the basis of a decision from the Crimean prosecutor.

No, there is no court ruling as such, however the Mejlis is now banned, and any member who continues to represent a banned organization will presumably face criminal charges.

It is likely that the decision last week was deliberately announced while high-ranking members of the Mejlis were outside Crimea.  The warning was clear:  return and you face imprisonment like the Deputy Head of the Mejlis, Akhtem Chiygoz, who has been imprisoned since January 2015.

There are a number of assertions in the CE report that have caused bemusement among those following developments in Crimea.  Olha Skripnik from the Crimean Human Rights Group is in no doubt that there is wide-scale repression directed against the Crimean Tatar people.  Perhaps the week spent in Crimea may not have been sufficient for the delegation to understand that TV Millet, which the report points out was created after Crimean Tatar media were silenced, is “nothing more than a mouthpiece for Russian propaganda”.  Perhaps not, although there were ample reports from rights organizations making the situation quite plain.

The exiled Crimean rights activist believes that the main reason that the report seems all too mild and “not objective” is that “the Council of Europe doesn’t want to quarrel with Russia”.

In legal terms it is not even clear who or what exactly the Russian occupiers are criminalizing, since local mejlis are not subdivisions, as claimed, of the Crimean Tatar Mejlis, but autonomous bodies of self-government.  While the level of illiteracy among the occupation authorities should not be underestimated, it is unlikely that an attempt will be made to clarify the situation.  Far better to instil general fear among Crimean Tatars through total uncertainty.

The accusations of ‘extremism’ have been used as a weapon since soon after Russia’s annexation of Crimea.  In April 2014 a formal warning “about the inadmissibility of extremist activities” was issued to one member of the Mejlis, Risa Shevkiev for raising the Ukrainian flag over the Mejlis building.  In June 2014, Shevket Kaibullaev, the Chief Editor of the Mejlis newspaper Avdet received a formal warning about alleged ‘extremism’.  Poklonskaya considered that texts in the newspaper arouse tension in inter-ethnic relations and constitute extremist activity. The words deemed ‘extremist’ included ’annexation’, ‘occupation’ and ‘temporary occupation of the Crimea’.

There are already reports that a children’s ensemble has been prohibited from performing in T-shirts with the Crimean Tata Tamga or national symbol.  The website (in exile) 15Mins cites its own sources as saying that there were an unprecedented number of police present at a concert in Bakhchysarai of the children’s ensemble. The officers forced the children to wear the T-shirts inside out to conceal the symbol.

Who then has become ’extremist’, if children are prohibited from wearing a Crimean Tatar national symbol?

The announcement by Russia’s justice ministry came exactly one month before the 72nd anniversary of the 1944 Deportation of the Crimean Tatar People.  Traditional remembrance events have always been organized by the Mejlis.  Remembering the victims of a terrible crime will now also be illegal ‘extremist’ activities.

Will the Council of Europe really be content to note that a new mosque is being built, or cite the isolated Crimean Tatars, including a couple of members of the Mejlis, who decided to collaborate with the occupation regime as proving some divide in opinion?

In theory, not.  On April 11, CE Secretary General Thorbjørn Jagland pointed out that banning the Mejlis “would discriminate against the whole Crimean Tartar community and is therefore unacceptable.”   There were similar statements from various governments, yet all spoke as though this were somehow in the future.

It is a reality now.  Two years after invading and annexing Ukrainian territory, Russia has effectively declared war against the Crimean Tatar people.  More words of concern, without real punitive sanctions, would be frighteningly inadequate.