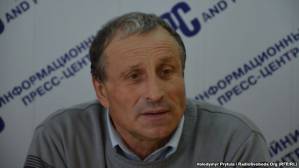 The latest clampdown on a Crimea news site run by Radio Free Europe/Radio Liberty (RFE/RL) has drawn international condemnation, with the United States denouncing it as "the Russian government’s growing crackdown on independent voices" on the annexed peninsula.

Crimea’s Moscow-backed authorities have repeatedly targeted the Krym.Realii website for its criticism of the peninsula’s annexation by Russia in March 2014.

Poklonskaya accused Krym.Realii of publishing materials that contain "justification of sabotage, extremism, and endless slander of government bodies in Crimea."

Her statement came shortly after Crimean prosecutors opened a criminal probe into the activities of a local journalist, who has written for RFE/RL, on charges of undermining Russia’s territorial integrity.

After Moscow annexed Crimea from Ukraine, the Russian parliament passed a law making it a criminal offense to question Russia’s territorial integrity, which also means opposing the occupation.

The United States and international media-freedom organizations have condemned the clampdown in Crimea.

"The United States remains deeply concerned about increasing restrictions on independent media and civil society in Crimea, " said Jonathan Lalley, a spokesman for the U.S. Embassy in Ukraine, in remarks published on April 20.

Lalley said individuals and organizations with dissenting views "are being silenced or driven out, " and condemned Crimean authorities for denying international observers access to the peninsula.

The Organization for Security and Cooperation in Europe (OSCE) also voiced concerns over the probe into Semena.

"This recent detention only shows the urgent need to stop the arbitrary practice of silencing journalists in Crimea, " said Dunja Mijatovic, the OSCE representative on media freedom.

The New York-based Committee to Protect Journalists called on security forces to "stop harassing journalists in Crimea for their reporting and expressed opinions."

Nina Ognianova, the committee’s Europe and Central Asia program coordinator, said Russia "has a record of equating criticism with extremism, and of using its broad laws to intimidate and silence the press."

Crimean prosecutors said that the Federal Security Service (FSB) was investigating Krym.Realii over an article "calling for the isolation of the peninsula and its inhabitants, including by military operations."

FSB officers searched Semena’s home in Simferopol, the regional capital, on April 19 and took him in for questioning. He was released later in the day and ordered not to leave the peninsula while he is being investigated.

The homes of several other local journalists were also searched.

RFE/RL Editor in Chief Nenad Pejic said attacks on RFE/RL staff have become "a regular practice" in Russia and Crimea.

"They have faced every possible pressure -- public attacks, threats against their families. Many have been forced to leave the peninsula, " he said in a statement.

Pejic said Krym.Realii would continue providing independent news to Crimea, adding that the website had over 30 million visits last year.

"This only confirms the importance of RFE/RL’s continued presence in Crimea, and the need for our journalists to work safely without fear of arrest or prosecution, " he said.

Independent media have been virtually banned in Crimea since the annexation. Like Semena, reporters who work for independent media outlets use pseudonyms to hide their identities.

The Krym.Realii website is published in Russian, Ukrainian, and Crimean Tatar.

Based on reporting by RFE/RL’s Krym.Realii, AP, AFP, TASS