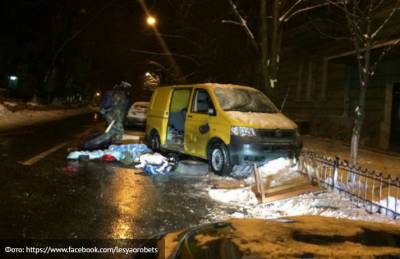 Anton Zazymko, who is facing serious charges over an attack by Berkut officers on Euromaidan activists, has held onto a renamed, but similar post in a National Police special forces regiment.   In a move viewed with anger by lawyers representing Maidan victims, the Kyiv Court of Appeal upheld the original rejection of the application for his suspension lodged by the Special Investigations Department investing Maidan crimes.

Zazymko is an ex-officer from the Kyiv Berkut and is suspected of having taken part in an attack on Maidan protesters during the night from Jan 22-23, 2014 on Krepostnoy Lane in the centre of Kyiv.  During the attack, the officers beat up and detained people, and smashed up a yellow mini-van and another vehicle.

Zazymko later got through the re-attestation procedure and became a senior sergeant of Kyiv National Police special forces regiment.  It was from this post that the Special Investigative Department, upheld by the prosecutor, sought his suspension for two months.  The application was heard by Judge Krystyna Hladun of the Pechersky District Court on April 8.  The prosecutor explained that there were serious grounds for suspecting Zazymko of exceeding his official powers through the use of force, threat of violence, special anti-riot means and painful and humiliating actions with grave consequences. He is also suspected of having drawn up a knowingly false official document about the circumstances of the detention and having given false testimony as a witness during the court hearing over the detention of one of the activists, resulting in his being remanded in custody.

The prosecutor asserted that Zazymko’s suspension was required since otherwise he could seek to influence witnesses and victims in order to get them to change their testimony, could conceal or destroy documents and / or inform other ex-Berkut officers about the circumstances of the criminal offences and of the investigation into them.  He also argued that Zazymko’s continued role as a member of a police unit would contradict the tasks of criminal justice and the interests of civil society.

Judge Hladun acknowledged that Article 154 does allow for suspension of suspects from a law enforcement body, as well as where the alleged offenses are of medium severity or grave, yet rejected the application.  She effectively cited the same arguments as Zazymko himself, namely that he had remained in the police force since Euromaidan; had taken part in the military action in Donbas and had undergone re-attestation, and added that he had good character references.  While lawyers representing Maidan victims have rather asked how Zazymko came to retain his post and get through re-attestation, the Kyiv Court of Appeal upheld Hladun’s ruling, with the refusal to suspend Zazymko now in force.

On April 21, another judge from the Pechersky District Court refused to remand in custody the former deputy head of Zazymko’s unit, Oleh Svyatny, but did place him under house arrest at night and order that he wear an electronic bracelet.  The charges are roughly the same as those which Zazymko is facing.

While it is undoubtedly true that a court must determine whether or not Zazymko is guilty of the charges laid, his involvement in the Berkut unit is not in question.  This is not the first time that Maidan lawyers have expressed frustration that people whose units took part in repressive actions continue to serve in the police force, with that service then used as grounds for not remanding them in custody, in the case of Tavakkul Ragimov, or not suspending them during the investigation.

The head of the Special Investigative Department Serhiy Horbatyuk and Maidan lawyers from the Advocacy Advisory Panel have complained on many occasions of obstruction from current police officers, ex-Berkut officers and sometimes judges.  Concern was recently expressed at possible measures to silence Horbatyuk through bizarre criminal proceedings.