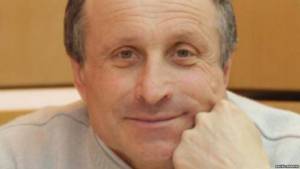 Mykola Semena, a Crimean freelance journalist has been formally charged with making ‘calls to violate the Russian Federation’s territorial integrity’ and could face a 5-year sentence.  The charges are under an article of the Russian Criminal Code introduced in May 2014, and are, as feared, being used to try to silence pro, test over Russia’s invasion and annexation of Crimea.

As reported, the FSB first carried out a search of Semena’s home, and that of several other journalists, on April 19.  They removed items of technology from Semana’s home and took him away for questioning.  Semena has written in the past for very well-known Ukrainian newspapers, but is now largely retired and writes on a freelance basis, including for the Radio Svoboda (Radio Liberty) Crimean Service [Krym. Realii].

That same day, the de facto prosecutor Natalya Poklonskaya told TASS that criminal proceedings had been initiated against somebody she identified as a Krym. Realii for supposed calls to separatism under Article 280.1 § 2 of the Russian Criminal Code.  She said that the charges are over one particular article, seemingly about the Crimean Blockade and claimed that this “justifies the actions of extremists and terrorists”.

Emil Kurbedinov, Semena’s lawyer, writes that they went for the new interrogation on April 28.  Semena used his right to refuse to give any testimony and was simply handed the notification that he is now a suspect.  The investigators, Kurbedinov reports, are also obtaining a linguistic assessment.  The information about this simply stated that the assessment was being provided by the Crimean FSB, without giving any indication of who was carrying it out.  That has now been formally demanded.

This chilling new criminal prosecution of a journalist coincided with Poklonskaya’s announcement that Krym.Realii was to be blocked.  She claimed that their ‘analysis’ of the content of the resource demonstrates that it is intended to “discredit the activities of the Russian Federation in Crimea, stir up inter-ethnic enmity and also make calls to extremist activities”.   Russia’s censor Roskomnadzor blocked two resources - Sobytiya Kryma [Events in Crimea] and the Centre for Journalist Investigations , while a large number of Crimean Tatar media were effectively silenced through the refusal to re-register them.

It also comes as Russia has banned the Crimean Tatar Mejlis [representative assembly] and plans are afoot to seriously increase penalties for what Russia calls ‘extremism’ and others – freedom of speech.

There has been international protest over the prosecution of Mykola Semena, and Radio Svoboda pointed out that they had repeatedly come under pressure from the Russian authorities, both in Russia and in Crimea.

Nina Ognianova, from the Committee to Protect Journalists,   noted that Russia "has a record of equating criticism with extremism, and of using its broad laws to intimidate and silence the press."

On April 28, the International and European Federations of Journalists issued a statement in which they reiterated calls from Ukrainian affiliates, the Independent Media Trade Union of Ukraine and the National Union of Journalists of Ukraine to drop the totally unfounded charges against Semena.

The recent escalation in repression in Crimea, and the use of this same article to imprison Russian Tatar activist Rafis Kashapov for criticism of Russia’s annexation of Crimea, give no grounds for believing that calls, unbacked by sanctions, will be heeded.