Ukraine’s Decommunisation Law hammered by Venice Commission for violating democratic standardsUkraine’s Communist Party OutlawedCommunist party ban will be slammed in Strasbourg, along with original decommunization lawPresident signs dangerously flawed ‘decommunization’ laws"Decommunization" Laws: Deeply Divisive and Destined for StrasbourgAnalysis of the Law on Prohibiting Communist SymbolsParliament ignores public opinion on Ukraine’s history. Will the President?Politicizing History: Parliament adopts Dangerously Divisive LawsPhantoms are phantomsFighting phantomsNo dossier on ShukhevychWorking to reveal the truth about OUN and UPAMore information from SBU archivesSBU is planning to tell the truth about Soviet efforts at discrediting the UPAPresident called on to help lift the seal on KGB archivesOn the 65th anniversary of UPA the arguments still rageFirst joint memorial unveiled for Soviet soldiers and fighters of OUN-UPA’Decommunization’ in Ukraine Carried Out Using Communist MethodsUkrainian student sentenced for ‘propaganda of communism’ on FacebookDivisive & Ill-Timed Renaming of Kyiv Street after Controversial Nationalist Leader
• Topics / Freedom of expression 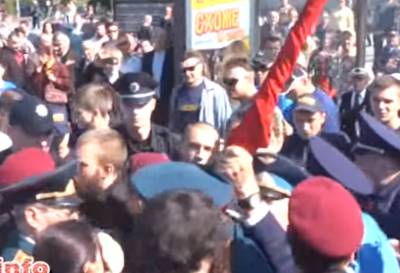 The violent attempts by far-right activists to prevent Cherkasy veterans unfurling a communist flag on Victory Day took a curious turn on May 9, one that could result in Ukraine losing yet another case at the European Court of Human Rights.  Only one criminal investigation has been initiated, with that being over the flag under the controversial law banning communist symbols. There is nothing to indicate that any measures are planned against the VO Svoboda and Azov Civic Corps members who tried to remove the flag using force.

It is possible that there were political battles at play behind the scenes in Cherkasy, but they are unlikely to have concerned the men in Soviet military uniform who wanted to unfurl the red flag on Soborna Square in the centre on 9 May.  Until 2015, this day, like in Russia, was known simply as Victory Day.  It is now officially Victory Day over Nazism in the Second World War 1939-1945.

This change is probably important to bear in mind since at least one of the VO Svoboda activists involved in trying to stop the flag can be heard shouting that they’re not real veterans.  Only one or two men could possibly be old enough to have fought in the Second World War, but others could well have been in the Soviet Army later, including perhaps in Afghanistan.

For whatever reason, they came to the square with the Soviet flag.  They were told to put it away by activists from the far-right VO Svoboda Party and Azov Civic Corps, who then began using force.  The activists claimed that as well as uniformed police officers, there were some plain-clothed officers who, they say, provoked the scuffle that ensued.  It is clear from the video footage that the violence could have been worse except that the police did persuade the veterans to take their flag into the city administration building.

If that was a constructive move, the same cannot be said for the announcement on the Cherkasy regional police website that a criminal investigation has been initiated under Article 436-1 of the Criminal Code.  This bans the preparation and circulation, of communist or Nazi symbols and propaganda of the communist and National-Socialist (Nazi) regimes.  Such actions can carry a sentence of up to five years imprisonment, or from 5 to 10 years if carried out by representatives of the authorities; more than once; by an organized group or with the use of the mass media.

This article is linked with one of four highly contentious ‘decommunization’ laws which President Petro Poroshenko signed into force almost exactly a year ago.  The bills had been heavily criticised with warnings that they were likely to result in Ukraine being found in breach of the European Convention.

All the criticism was reiterated in the joint interim opinion from the Council of Europe’s Venice Commission and OSCE/ODIHR which found that the law banning symbols could infringe people’s right to freedom of expression and of association.  The experts considered that the scope of the law was too broad, and the long terms of imprisonment too severe.  Although Ukraine’s leaders promised that amendments would be introduced, this has yet to happen.

Other concerns have also been expressed, including the likely divisive nature of a law which goes against the views of a significant percentage of Ukrainian society.

In a report on What Unites and Divides Ukrainians from Dec 25, 2014 to Jan 15, 2015, the authoritative Democratic Initiatives Foundation and Ukrainian Sociology Service found, for example, that a relative majority (47% against 20%) viewed the creation of the Ukrainian Soviet Socialist Republic positively.  The law in question prohibits “public denial of the criminal nature of the communist totalitarian regime of 1917 – 1991 in Ukraine”.

This percentage is considerably higher than the percentage of Ukrainians who would share the far-right views of VO Svoboda or Azov who acted as vigilantes during the events on May 9.  An additional criticism of the ‘decommunization’ laws was that they prohibited Nazi and communist symbols, while ignoring many associated with far-right or even neo-Nazi organizations.  These include, for example, the Wolfsangel and Black Sun on Azov banners which are widely associated with neo-Nazi organizations and remain totally legal in Ukraine.

We thus have far-right organizations taking the law into their own hands over a red flag on Victory Day, with only those wanting to unfurl the flag facing possible prosecution.  And that on the basis of a law which will almost certainly result in judgements against Ukraine at the European Court of Human Rights.