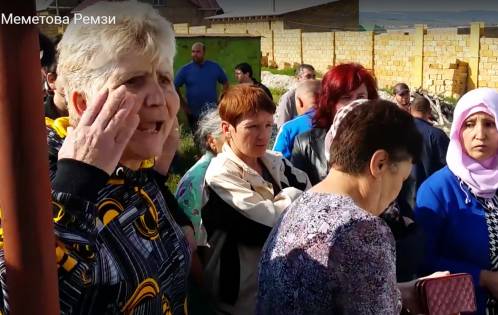 It is not surprising that Crimean Tatars and other Ukrainians are so eager for the world to hear and support Jamala.  The Crimean Tatar jazz singer - and winner of Eurovision 2016 -  has become a voice not only for the victims of the 1944 Deportation at the Eurovision Finals on 14 May, but also for Crimean Tatars under Russian occupation who are once again facing persecution in their native land.

For the last three days, armed searches of Crimean Tatar homes, a mosque and a restaurant have been carried out in Russian-occupied Crimea. Crimean Tatar Muslims have been arrested and taken away.  Zair Smedlyaev, a prominent Crimean Tatar public figure, calls the actions ‘a provocation’ and expects them to continue until 18 May, the anniversary of the Deportation of the entire Crimean Tatar people in 1944.

He believes the searches and arrests are intended to provoke Crimean Tatars to take radical steps.  “Not much is needed to provoke conflict”,  he says, then they’ll plant weapons and use them to try to justify a major crackdown.

So far the tactics are not proving successful. The searches have been met with strong, but peaceful protest.  Women have surrounded the masked and armed men, shaming them for such lawless behaviour and young men have courageously stood their ground, simply asking what is going on.    The elderly lady in the picture was addressing the armed men during the arrest of Remzi Memetova: “Our people have never caused anybody harm, never!   We lived so many years in Ukraine, there was not one terrorist act, no harm…. You have no right to carry out such searches…”

In the village of Pionerske a Crimean Tatar, Abdullah Yuvashev was taken away for . However, lawyer Emil Kurbedinov writes that he is likely to be released. “It was a mistake”, supposedly.

On Saturday, Smedlyaev gave the latest report from the zone of ‘military action’. How else, he asks bitterly, can you describe these visits by men with their faces covered and machine guns in their hands.  A Crimean Tatar from the village of Pionerske, Abdullah Yuvashev was taken away, however according to his lawyer was released after about an hour.  “A mistake”, supposedly.

Was it a similar ‘mistake’ that led armed and masked men arrive on Friday to search a mosque?

While the police buses continue to make their intimidating rounds, ‘courts’ in occupied Crimea were busy on Friday extending yet again the detention of Crimean Tatar leader Akhtem Chiygoz, as well as two other Crimean Tatars Ali Asanov and Mustafa Degermendzhy.  The case is overtly lawless, and all three men have been recognized by the Memorial Human Rights Centre in Moscow as political prisoners.

‘Courts’ remanded in custody another four men arrested on 12  May. There could be no excuse for any of the detentions. These were especially cruel since Enver Mamutov is the father of seven, while Zevri Abseitov and Rustem Abiltarov are both bringing up four children.   De facto ‘prosecutor’ Natalya Poklonskaya has already publicly stated that they and Remzi Memetov face sentences from 10 to 20 years. They are accused of ‘terrorism’ on the basis of alleged involvement in the Hizb ut-Tahrir pan-Islamist organization which is legal in Ukraine and most countries.

Details about the unwarranted charges and the 10 other Crimean Muslims now imprisoned can be found here. The Memorial Human Rights Centre recognizes all those arrested and charged with involvement in Hizb ut-Tahrir to be political prisoners; the Sova Centre in Moscow, which monitors abuse of extremism legislation and xenophobia, has repeatedly condemned such arrests as lacking any foundation in law. 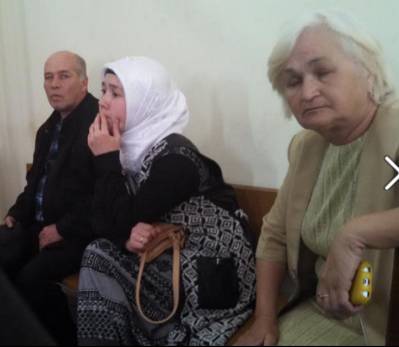 The new wave of arrests on 12 May also included 58-year-old Imli Umerov, the deputy head of the Crimean Tatar Mejlis [the nation’s representative assembly], Later he was released after giving a signed undertaking not to leave Crimea. He has been charged meanwhile with ‘public calls aimed at violating Russia’s territorial integrity’, issued on the Internet.  The new Article 280.1 § 2 of the Russian Criminal Code came into force in May 2014, and, as was feared, has since been used to imprison those who state clearly that Crimea is part of Ukraine and criticize Russia’s annexation. Since the ‘charge’, openly spelled out by the official Russian ‘Rossiyskaya gazeta” is effectively of “calling for the return of Crimea to Ukraine”, Umerov and thousands of other Crimean Tatars and Ukrainians could also be facing up to 5 years’ imprisonment.

Two years after Russia invaded and occupied Crimea, court buildings are full of mothers with young children, sisters and other relatives.  If they’re ‘lucky’, they can hope to share a word with the detained men, or at least let them see their children as they’re led in and out.

Jamala is speaking for them.