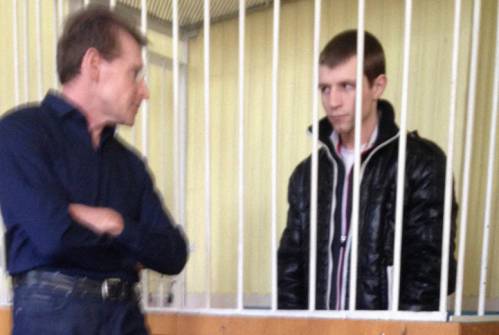 23-year-old Andriy Kolomiyets, who has been in custody for over a year in Crimea, is facing a possible 20-year sentence. on surreal charges of ‘attempted murder’ over an alleged Molotov cocktail during Euromaidan.  Despite the legal nonsense in an indictment over something that Russia can have no jurisdiction over, this is already the second such Euromaidan-linked trial. and there is every indication that it will not be the last. The Crimean Human Rights Group warns.that anybody holding pro-Ukrainian views in Russia or Russian-occupied Crimea could find themselves facing prosecution.

In this case there is nothing even to link Kolomiyets with Crimea.  He was arrested in the North Caucasus (Russia) on May 15, 2015 and taken illegally to Crimea where he has been in custody ever since and is now on trial.  Almost everything about his case follows the same pattern as the prosecution and prison sentence passed on former Maidan activist Oleksandr Kostenko.  In both cases torture was applied to obtain ‘confessions’ and the alleged ‘victims’ were Ukrainian Berkut riot police officers, from the Crimea unit, who changed allegiance after Russia invaded Crimea.  As with Kostenko, the insane charges over Euromaidan have been ‘supplemented’ by ordinary criminal charges of possession based almost certainly on planted evidence.

There is one chilling difference, namely the scale of the likely sentence for an alleged crime in Ukraine against Ukrainians over which Russia could in any case have no jurisdiction.

23-year-old Kolomiyets had been living in the North Caucasus with his 32-year-old partner Galina Zalikhanova and her four children.  Zalikhanova told Mediazona that her ex-husband constantly caused scenes, and she and Kolomiyets both believe that he was to blame for Kolomiyets’ arrest.  That may be the case but the de facto Crimean prosecutor Natalya Poklonskaya had long threatened a stream of such prosecutions, and Kolomiyets is not the first Ukrainian to have been seized, tortured and then placed on trial since Russia began its aggression against Ukraine.

The charges over Maidan were laid shortly after those for “possession of drugs in a large quantity”.

The investigators claim that he was a member of the ‘Ukrainian Insurgent Army’ [UPA], an organization banned in Russia, and “shared its extremist ideology”.  He is supposed to have gone to Maidan on Jan 20 “in order to show armed resistance to law enforcement officers”.

There he allegedly caused the ‘physical pain’ that has been turned into ‘attempted murder’ of the then Berkut officers M. Kozakov and A. Havrylenko.

Kolomiyets was a Maidan activist, and on that the truth in the investigators’ claims ends.  He denies any involvement in this organization called ‘UPA’, and there is absolutely nothing to back the claims aside from his confessions which he has retracted and says were given under torture.

He also denies having been involved in any violence on Maidan.  His lawyer, Mikhail Kushel points out that the two ex-officers claimed to have recognized Kolomiyets as the specific activist who, among a huge number, had hurled a Molotov cocktail at them a year and a half after the event.  He was presumably so memorable because they had “experienced physical pain”.

As reported here, Kolomiyets has given a harrowing account of the torture he suffered.  This included, for example, having a bag placed over his head, and his fingers attached to a wire, after which a damp rag was placed under his hands and an electric current turned on.

Kolomiyets has clearly stated to the court that they used the torture to force him to say that he had taken part in extremist Ukrainian organizations in Kyiv in 2014 and that he had tried to kill Berkut officers. He told the court, under presiding judge Mikhail Belousov, that he had turned to all previous lawyers and told them of his innocence and of the illegal and criminal activities of the police officers.  They had responded that there was no point in such a position and that he should confess.  All ‘confessions’ were tortured out of him, he stresses, in the absence of legal assistance.

The court has shown no interest.  This sadly is to be expected.  The most serious part of the indictment, which carries a sentence of up to 20 years, should have been thrown out of court at the preliminary hearing.  Even if the charges were not absurdly implausible, they would still pertain to something that happened in Ukraine, to Ukrainians and under Ukrainian law.

The next hearing in Kolomiyets’ trial is on June 1.  The next victim is unknown, but Natalya Poklonskaya, the de facto Crimean prosecutor facing sanctions for her part in Russia’s annexation of Crimea, has promised to continue reprisals against Ukrainians who took part in Euromaidan in Kyiv.  With this level of lawlessness, any Ukrainian national is in danger.