Two Years Later, Kremlin’s Lethal Lies about Odesa Fire Still Motivate Donbas RecruitsSabotage or Corruption? Crucial suspect in Odesa May 2 tragedy allowed to escapeUkraine’s Prosecutor General shelves vital Odesa 2 May investigation‘Clear Signs of Sabotage’ in Odesa 2 May Investigation"US guilty of genocide": Kremlin supports anti-Maidan festival with links to the German far rightOdesa 2 May Suspect: We were financed by MoscowVital Probe of Odesa May 2 Tragedy stymied because of questions answered?Movement at last on Odesa 2 May investigationRussia Today, or why Odesa May 2 is different from BaltimoreOdesa May 2 Investigation: A Failed Test for Ukrainian JusticeMore Evidence against Incendiary Lies about Odesa 2 MayContinuing Obstruction of Odessa May 2 InvestigationPropaganda that KillsOdessa May 2 trial turns into farce as Russia continues ‘massacre’ propagandaBad Start to Crucial Odessa May 2 TrialsRussia’s New Odessa FileOdesa "Massacre" Propaganda vs. the FactsDangerous silence over police role in Odessa May 2 eventsWithout Double StandardsWhat Russian TV won’t show about the events in Odessa
• Topics / Politics and human rights 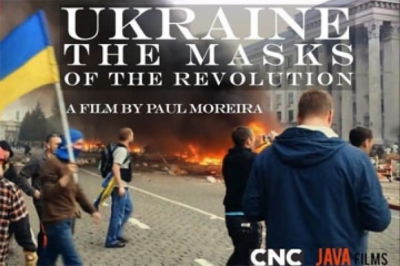 Can lies that kill and distortion of events that have led to mass human rights violations be protected by the right to freedom of speech?  Swedish TV SVT seems to think that they can since it has, despite strong protest, decided to broadcast Paul Moreira’s ‘Masks of the Revolution’.  Only a brief ‘discussion’ after the film is programmed which can in no way hope to address the very dangerous misrepresentation in this film about recent events in Ukraine.  The film has been condemned by French journalists working in Ukraine, as well as many in France.

There are three subjects that are grossly distorted in the film.  It is likely that any discussion will focus on Moreira’s contentious assertions about Euromaidan and the inflated role he attributes to the far right, with alleged US backing.  That debate is one reason for not addressing them here.  The other is that the events were followed by the world media, and there is much more chance that viewers will be able to critically assess the film.  They will hopefully be able to pitch the film’s assertions against the fact that among the Ukrainians who took part in Maidan, including some who paid with their lives, there were many Jews, Crimean Tatars, Armenians and other minority groups who would hardly have stood arm in arm with ‘neo-Nazi fascists’.

Moreira’s highly misleading representation of Russia’s invasion and annexation of Crimea and of the tragic disturbances and fire in Odesa on May 2, 2014 is much more toxic and treacherous since the viewers are not even likely to understand that they are being duped.

Moreira presents a narrative about an ‘Odesa massacre’, familiar to anybody who has followed Russian pro-Kremlin propaganda over the last two years.  Moreira’s championing of this view is especially baffling since he did know where to find truthful information.  His assistant contacted the 2 May Group, a non-partisan civic initiative which has investigated the events on May 2, 2014.  Tetyana Gerasimova from the 2 May Group says that she was startled when Moreira only sought commentary on scenes with members of Right Sector or of police inaction.  She had assumed that a French filmmaker producing a film for Canal Plus would be interested in the truth. This proved not to be the case.

Moreira’s determination to present only right-wing activists as ‘villains’ grossly distorts the facts.  Gerasimova notes that he showed no interest in the fact, recognized by all impartial observers, that the disturbances were provoked by anti-Maidan activists who violently attacked a pro-Ukrainian march where many people had come with children.  In the riots that developed, there were people on either side who used weapons and the first two deaths were in fact of Euromaidan supporters.

The fire which is presented as a ‘massacre’ was nothing of the kind.  Independent experts have concluded that there is no way of knowing whether the tragic fire was caused by Molotov cocktails thrown by anti-Maidan activists from inside the building, or by pro-unity activists outside the building.

It is entirely clear from video footage that the vast majority of people outside had no idea that there were so many people trapped in the building.

If Moreira’s assumptions about the events were shaped by pro-Kremlin media, then he would certainly have not viewed the considerable amount of video footage showing the desperate attempts by pro-unity activists to drag over scaffolding and save those trapped.  This is always edited out of the propaganda versions, as is the other evidence contradicting the ‘narrative’ version.

Moreira is, nonetheless, an investigative journalist.  Whatever his views before arriving in Odesa, he had plenty of opportunity to correct his mistakes.  Instead he has pushed them, often also using edited footage to conceal what does not fit his story.

He claims that “45 Ukrainians of Russian descent died in the fire” and that this was caused by Ukrainian nationalists’ Molotov cocktails.  It seems that in his debate with two French critics - Ioulia Shukan and Anna Colin Lebedev – he asserted that there had been silence because “the victims were Russian”.

This is rejected by Gerasimova who points out that the only person whose ‘Russian descent’ is certain was, in fact, Ihor Ivanov, the first person killed that day and a member of the Right Sector Self-Defence unit whom Moreira paints as villains of the story.

This attempt to present people as victims because of alleged Russian origin is very similar to the line pushed by Russia since its annexation of Crimea.  Coverage of the military conflict in Donbas has constantly presented it as due to Ukraine’s “punitive action against the Russian-speaking population”. In 2014, the Russian Investigative Committee even initiated a criminal investigation into what it claimed was “the genocide of the Russian-speaking population of Donbas”.  This line was pushed on pro-Kremlin media, with the lavish use of fake video footage and stories of atrocities that never happened.

It is known that lies claiming there was a deliberate massacre of pro-Russian, anti-Maidan activists in Odesa have been used to recruit Ukrainians and Russians to fight in the Kremlin-backed and armed conflict in Donbas.

That this is deliberate cannot be doubted.  Moscow and pro-Kremlin media are fully aware of the reports contradicting their version.  These include the findings published on Nov 4, 2015 by the Council of Europe’s International Advisory Panel.  That report criticizes the investigation, but also concludes that the riots were initially provoked by pro-Russian activists and became uncontrolled because of the failure to implement the ready action plan.  The responsibility for the deaths in the Trade Union building lies with the emergency services who took 40 minutes to appear.

Russian media give extensive coverage to all such criticism of the investigation, while carefully omitting the fact that the same reports totally refute their ‘massacre’ narrative.

Moreira has also followed Moscow’s line on Crimea, distorting or muffling the facts.  He says nothing about Russia’s invasion and annexation, claiming only that “after the revolution, Crimeans overwhelmingly voted in a referendum to unite with Russia”

This ‘referendum’ was organized within 10 days of Russian soldiers’ seizure of the Crimean parliament, overseen by Russian soldiers and armed paramilitaries and ‘observed’ by pro-Russian members of various neo-Nazi, far-right or extreme left parties.  Even the Russian President’s own ‘Human Rights Council’ has acknowledged that the supposed overwhelming support was rigged. The report found that the turnout for all of Crimea was from 30-50% and only 50-60% of those voted for joining Russia (details here Myth, ’observers’ & victims of Russia’s fake Crimean referendum).

Moreira is equally dishonest about the Crimean Blockade which was initiated by Crimean Tatar leaders with very specific human rights demands, including the release of Russia’s Ukrainian political prisoners.   None of this gets any mention at all, with the blockade supposedly because “Right Sector took upon itself to starve Crimea”.

The broadcasting of Moreira’s film comes just days after Crimean Tatars under Russian occupation were prohibited from gathering to remember the victims of the 1944 Deportation.  It coincides with one Crimean Tatar leader Ilmi Umerov being officially charged with ‘extremism’ for expressing the wish for Crimea to be returned to Ukraine and another leader Akhtem Chiygoz having his 16-month-long detention on legally nihilistic charges extended.  The first trial on totally fictitious ‘terrorism’ charges has begun with the four defendants likely to receive sentences of 10-15 years.  Thus far 14 people, all but two Crimean Tatars and one a prominent human rights activist, are in custody facing such charges which are clearly aimed at terrorizing Crimean Tatars and giving the impression that they pose a threat.  This follows the banning as ‘extremist’ of the Crimean Tatar Mejlis, or representative assembly of the main indigenous people of Crimea.  Four Crimean opponents of annexation, including filmmaker Oleg Sentsov are serving politically motivated sentences in Russia, as are many others.

The list of human rights violations in Crimea is huge.  Some of them were mentioned in the demands put by the initiators of the blockade which Moreira chose to view as a far-right plot to starve Crimea.

The 2 May Group and others are trying very hard to ensure that the truth is known about the events on May 2, 2014 and would have happily allowed their film, available in Russian,  English and in German to be used.  Crimean Tatars and others also need the world, including SVT viewers, to learn of the repression they are facing.

Instead, SVT is broadcasting a film which distorts and conceals that truth.