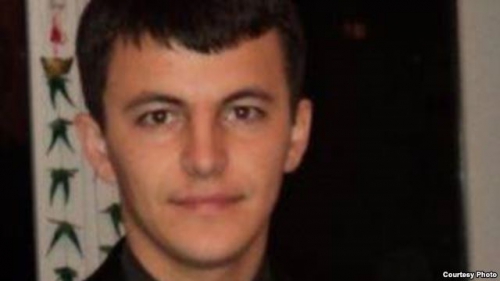 Ervin Ibragimov, a Crimean delegate to the World Congress of Crimean Tatars, has disappeared and was almost certainly abducted late on May 25 near his home in Bakhchysarai.  This is the latest of many abductions and disappearance since Russia invaded and annexed Crimea, and is made especially chilling by the FSB’s refusal to allow his family to report Ervin’s disappearance.

32-year-old Ervin Ibragimov is a former member of the Bakhchysarai Council and an executive member of the World Congress of Crimean Tatars.  He last spoke with his father at around 11 p.m.   Much later his car was found not far from his home, with the doors wide open and the key in the ignition.

Later in the day, video footage from CCTV cameras on a nearby shop was published which appears to show Ibragimov being seized by men wearing what may be Russian traffic police officer uniforms.

Ibragimov was supposed to be travelling with Ilmi Umerov, Deputy Head of the Crimean Tatar Mejlis [representative assembly] to Sudak on Wednesday morning where the court hearing was scheduled against Crimean Tatars detained for a peaceful remembrance action on May 18, the anniversary of the Deportation.

There has been no official information from the de facto authorities and Crimean Tatar rights lawyer Emil Kurbedinov reports that the FSB in Simferopol have refused to accept the report of Ibragimov’s abduction from his family, together with the CCTV footage. Nobody came out to speak to them, and they have been forced to send the report by post.

This clearly raises serious questions.  There have been all too many unwarranted detentions since Russia annexed Crimea, but they do not take place close to midnight with no records kept.  If this apparent abduction has nothing to do with the Russian FSB, then why the deliberate obstruction of attempts by desperate parents to find their missing son?

One of the lies assiduously pushed by Russian President Vladimir Putin, is that there have been no deaths as a result of the ‘events in Crimea’, i.e. the seizure of power by Russian soldiers and annexation.  The number of known deaths may have been small, after all, with no support from western countries, Ukraine could not send men to die a senseless death against a much stronger adversary.  There have, however, been abductions and disappearances with the de facto authorities scarcely pretending to investigate.  The following are just some of them.

39-year-old Crimean Tatar and father of three,  Reshat Ametov was abducted by pro-Russian paramilitaries in March 2014 from his lone picket in protest at Russian occupation outside the Crimean parliament. His badly mutilated body was found almost two weeks later. Despite video footage of the abduction, no arrests have been made and his brother was told in January 2015 that the investigation had been terminated.

Islam’s father Abdureshit Dzhepparov formed the Crimean Contact Group on Human Rights after his son’s disappearance.  This monitors the mounting rights violations under Russian occupation and also provides support for the families of men arrested.  One of the Crimean Tatars who joined the group and monitored abuses in the Yalta region is Emir-Useyn Kuku.  He faced systematic harassment from the occupation regime from then on, and in February 2016 was arrested and remanded in custody.  He and 13 other men, almost all Crimean Tatars, are now facing grotesque ‘terrorism’ charges.

Armed searches and arrests in Crimea are continuing.  While any Ukrainians who do not conceal their opposition to Russian occupation are at risk, and some are imprisoned, Crimean Tatars are being targeted as a people.  The recent banning of the Crimean Tatar Mejlis which is the self-governing body of the main indigenous people of Crimea elicited only words of condemnation from EU and other bodies.  Even those words are all too seldom heard.  Without confronting any real opposition from the West, Russia is openly escalating its repressive measures and terror, as this latest abduction of Ervin Ibragimov demonstrates.