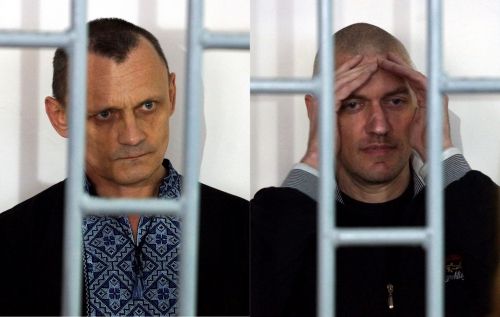 One day after releasing Nadiya Savchenko, Russia has sentenced two other Ukrainians to virtually identical terms of imprisonment on even more insane charges.   The indictment flew in the face of historical fact, and both Mykola Karpyuk and Stanislav Klykh can prove that they were in Ukraine at the time of the alleged crimes in Chechnya.  The two men also bear the scars of the torture inflicted to extract ‘confessions’ incriminating not only themselves, but the former Ukrainian Prime Minister Arseny Yatsenyuk and other prominent Ukrainian politicians.

As if all of this were not enough, the sentencing of two Ukrainians for supposedly killing Russian soldiers while fighting in Chechnya comes after Russia has spent the last two years arming, financing and to some degree organizing the killing by Russians in Donbas of Ukrainian soldiers.

The court in Grozny, Chechnya under Judge Vakhit Ismailov on May 26 sentenced Karpyuk to 22.5 years, Klykh to 20 years.  The verdicts will, of course, be appealed, although the cynicism of these sentences leaves little grounds for optimism.

Mykola Karpyuk was effectively abducted after being tricked into going to Russia in March 2014.  Nothing was heard from him until shortly before the ‘trial’ in October 2015.  Stanislav Klykh was seized from a hotel in the Oryol oblast where he had gone to meet a woman he believed he had befriended.  He was held incommunicado for 11 months.

Both men had only state-appointed ‘lawyers’ there only to tell them to ‘confess’ and to sign documents.

As soon as the men were allowed to see real lawyers, they retracted all testimony, all ‘confessions’ and provided harrowing accounts of the torture they had been subjected to.

As well as physical scars, there are medical documents in Klykh’s case which provide proof of his torture allegations.  There is also, unfortunately, his extremely disturbed behaviour over recent months which may well be explained by the psychotropic drugs he has asserted were forcibly administered.

The results of this ‘Russian pre-trial investigation’ were, typically enough, first reported by Alexander Bastrykin, the Head of Russia’s Investigative Committee and then by other pro-Kremlin media, such as the Russian propaganda channel Life News

Bastrykin claimed that “the majority of Ukrainian far-right nationalist radicals who took part in the anti-constitutional coup in Ukraine in February 2014, at one stage fought in Chechnya on the side of illegal gangs …”   He then asserted that Arseny Yatsenyuk, who was then Ukraine’s Prime Minister, had been one of them.  More, much more.  Yatsenyuk had supposed tortured and shot captured Russian soldiers in Grozny on Jan 7, 1995 (see: The Chilling side to Russia’s claims about Yatsenyuk as Chechnya fighter).

Yatsenyuk responded by suggesting that Bastrykin needed to see a psychiatrist.  In fact, he needed only investigators willing to ‘obtain’ such confessions and a prosecutor and court with no qualms about carrying the commissioned ‘show trial of Ukrainian nationalists’ through to its cynical conclusion.

Most disappointingly, even the involvement of a jury proved unable to obstruct the course of such ‘Russian justice’.

The court had certainly made every effort to prevent the defence demonstrating evidence which simply demolished the entire case.  He was helped in this by thugs, almost certainly linked with Chechen leader Ramzan Kadyrov, who used heavy-handed methods to threaten defence witnesses and deter journalists from Grozny.

Klykh and Karpyuk were accused of having been members of the Ukrainian nationalist organization UNA-UNSO and having, at the end of 1994 and beginning of 1995 been part of an armed formation which fought against Russian federal forces. They were supposed to have killed at least 30 Russian soldiers.

The respected Memorial Human Rights Centre subjected the indictment to analysis and found it in total conflict with the facts.

Of the 30 Russian soldiers whom Russia claimed that Karpyuk and Klykh had killed, 18 had died in another place altogether, and a further eleven had not been killed by gunfire, as the prosecution claims.   Only one man had died, as per the prosecution’s story, of gunfire, but not from the type of gun that the investigators claim was used.

The entire ‘case’ had been based on testimony which the defendants had retracted, and that from Oleksandr Malofeyev, whose testimony Memorial HRC dismissed as entirely at odds with historical fact.  Malofeyev was also noted to be a highly unreliable ‘witness’.  He was already serving a 23-year sentence for crimes in which two people were killed, and the extra sentence of 24 years for crimes he could not have committed made no difference to his situation.  He is also an HIV positive drug addict with hepatitis B, C and tuberculosis, making it extremely easy to put pressure on him by threatening to withdraw his treatment.

Russia has now proven that even historical fact can be openly discarded when politically motivated sentences are commissioned.