Russian poet detained for ripping down portrait of StalinKremlin-funded Sputnik Int. claims West criticizes Stalin to weaken Russia & its leadershipKremlin’s proxies purge memory of victims of Holodomor and political repressionRussia’s ’new approach’ to Stalin and extended secrecy about his victimsStalin Museum: Putin’s Russia Immortalizes Bloody DictatorAnger and Protest over Stalin Monument in YaltaPortrait of Stalin appears in Russian-occupied CrimeaStalingrad as latest step in re-glorification of tyrantNeo-Nazis in Moscow’s ServicePro-Russian separatists start their own anti-Semitic TV channelPro-Russian, anti-Roma, anti-Semitic and hunting out Ukrainian speakersThe Donetsk anti-Semitic leaflets – what should not be overlookedEast Ukraine crisis and the ’fascist’ matrixRussia continues its false narrative as defender of oppressed minorities in UkraineRussian propaganda claims Jewish organizations supporting Maidan are bringing on "second Holocaust"The Crimean referendum’s neo-Nazi observersPutin’s Neo-Nazi HelpersChief Rabbi and others dismiss Putin’s “anti-Semitic extremist” claimsRussian propaganda must be challengedWestern Media: Don’t distort the situation in Ukraine!
• Topics / News from the CIS countries 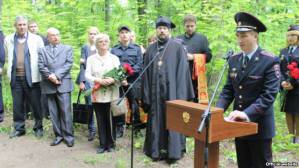 Local dignitaries and the granddaughter of NKVD officer Valter Vand attend the unveiling of a monument to victims of Stalin’s Great Terror in Saransk.

In the summer of 2004, a group of activists near the city of Saransk made a gruesome discovery: Some 500-700 corpses buried in shallow mass graves in a forest.

They were the bodies of victims of Josef Stalin’s Great Terror in the 1930s. According to local historians, the victims were Orthodox priests, Muslim clerics, local teachers, collective farmers, and workers. Their names are unknown because the archives of the Soviet and Russian secret police remain closed.

"We brought our information about the grave to the government, to academic circles, and to civil society, " activist Nikolai Kurchinkin told the Saransk edition of the government newspaper Rossiiskaya Gazeta. "But there was only silence."

The activists hoped that the bodies would be exhumed and buried properly in the city cemetery. They hoped that a monument would be placed on the spot where the victims were dragged out into the forest and shot in the back of the head.

On May 23, however, a monument was unveiled on the site, one of the few monuments in Russia devoted to "the victims of political repressions during the 1930s." But after a single line noting that fact, the monument’s text then dedicates 12 lines to honoring one particular victim of Stalin’s Terror: Valter Vand, the former head of the local branch of the NKVD, as the secret police tasked with carrying out executions and many other forms of political repression at the time were known.

"This monument is not only for the victims of political repressions, " Freiman said, "it is a monument to their families as well, who in an instant became &#146enemies of the people, ’ outcasts. This monument is for them, who shared the fate of their relatives, who did not betray them, who struggled for their good name until the end of their days."

It is well known that many communists were among Stalin’s victims. Among such "victims, " one must count Vand’s boss, Nikolai Yezhov. Yezhov, who slavishly presided over the worst years of the Terror as head of the NKVD, was himself arrested, tortured, and executed in 1940. One of the crimes he was allegedly killed for was ordering the purge of about 14, 000 NKVD officers and other security officials.

One of whom was Valter Vand. Vand didn’t stand out much among the NKVD officers of his time. He was born in Germany and served as a German officer in World War I. He was taken prisoner in Russia and decided to remain in the country following the Bolshevik coup in 1917. He began his career in the Soviet repression machine in 1920, becoming the head of the Mordovia secret police in 1932.

Interestingly,  according to the blog of Russian writer Boris Akunin, Vand only became a Soviet citizen in 1932 after he was already heading the Mordovia police.

"He was so thoroughly suffused with Russian patriotism and love for this expansive country, " said Mordovia Deputy Interior Minister Tolkunov at the unveiling, "that he chose to dedicate his life to serving the good of Soviet Russia. Despite the fact that his fate turned out tragically -- [Vand was arrested in June 1937 and] was shot on May 23, 1938 -- he remained true to his principles and convictions until the very end."

Soviet Russia seemed to be enduring an epidemic of "tragic fates" at the time. The local party boss reported to Yezhov shortly after Vand’s arrest that "his successor, comrade Veizager, in three months has done dozens of times as much chekist work as comrade Vand did in many years."

Vand was rehabilitated in 1957, and Veizager in 1994. Both of them, very likely, are in the unmarked graves with their victims.

Nobel Prize laureate Svetlana Alexievich commented in October 2015 on the shadow of Stalin.

"Deformed people have emerged from socialism because a prison camp deforms both the torturer and the victim, " she said. "What has remained is the deformed intelligentsia who do not know where good and evil are."

"This is something I only realized while I was working on Second-Hand Time, " she continued, in a reference to her recent book, which examines the post-Soviet mentality two decades after the collapse of the Soviet Union. "I did not think that so much of Stalin’s legacy has remained in our countries. It turns out that he is more alive than all the living. He really lives on -- he continues to be a kind of landmark. The rulers want this."