Kremlin-backed militants to put maimed and tortured hostage on ‘trial’ 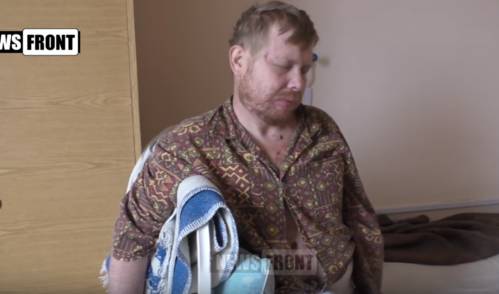 Instead of releasing a maimed and blinded Ukrainian in an agreed exchange, the so-called ‘Luhansk people’s republic’ [LNR] has ‘charged him’ with acts of sabotage.  45-year-old Vladimir Zhemchugov has been moved from hospital to a SIZO or remand prison, which his wife understandably fears will kill him. This is the latest example of a disturbing trend where the Kremlin-backed militants claim that all its hostages are ‘criminals’.

As reported, the only public information about Zhemchugov up till now came from the LNR militants and a propaganda site linked with them.  The latter published a video in which he ‘confesses’ to carrying out acts of sabotage for the Ukrainian armed forces.  Although Zhemchugov has certainly sustained serious injuries, he also seems to have been beaten and is obviously having difficulty speaking.

Ukraine rejects the LNR llegations, and says that Zhemchugov is a civilian whose injuries were caused on September 28, 2015 by a mine.

Yulya Lopukhina from the Russian independent newspaper Novaya Gazeta now reports that she was contacted by Zhemchugov’s wife Yelena who asked her to write about her husband.  The initial text message said that Vladimir had been held in captivity for 8 months, that both arms have been amputated, he can’t see, and has injuries to the stomach and a leg.  Not only are the militants not exchanging him, but they are planning to move him to a remand prison. 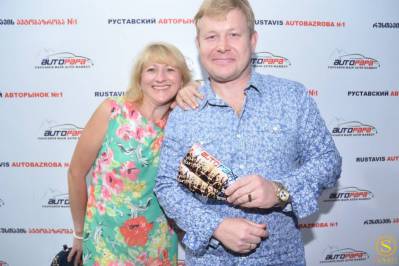 Earlier photo of Vladimir Zhemchugov and his wife

During a phone conversation, Yelena explained that she and her husband are originally from Donbas, but have been living and working in Georgia.  When the war in Donbas began, Zhemchugov went to Krasny Luch to get his mother out. He took her to Kyiv and registered them both as displaced persons.  His wife believes he must have then returned to collect belongings.

Her husband is a patriot, she says, who never hid his pro-Ukrainian views, and did not support the militants.

She had been phoned from the LNR ‘police’ on September 29. They asked whether her husband really was a businessman, and said that somebody had given him a grenade.

She was in Georgia and had no idea what was going on.  Since it would take time for her to reach Donbas, she rang relatives and friends and asked them to go to the hospital, find out what had happened, and to take her husband medicines.

It turned out that all of those whom she asked had ended up summoned for interrogation, and nobody was being allowed to see her husband.

Since then she has been desperately trying to obtain her husband’s release.  An exchange was arranged and was supposed to take place on Nov 17 last year.  The militants, however, changed the conditions, and then a week later, on Nov 25, Zhemchugov was shown on Newsfront ‘confessing’.  This was supplemented by a report from Leonid Pasechnyk, referred to as the ‘LNR’ state security minister.  While effectively acknowledging that there had been an agreement to release Zhemchugov, Pasechnyk asserted that the investigators still had “certain questions” which needed to be clarified”.   He claims at the same time that Zhemchugov was in fact a saboteur who had blown up railway tracks and an electricity pylon.  Zhemchugov had supposedly gone back to check a mine that had not exploded and it had blown up, causing his serious injuries.

Pasechnyk paints a less than credible picture of Zhemchugov receiving medical care and categorically denies that any physical or other pressure was applied. He says that “work” is currently underway by the ‘ministry’s investigative units’.  What such ‘work’ entails seems clear from the video.  This was made two months after the injuries, and is harrowing to watch. Even if Zhemchugov had not been beaten, the video, given his condition, would already constitute torture.

The militants’ claim to credibility is strained still further by lies they have told, including the assertion that Zhemchugov had already been handed over, and by the refusal to let anybody see him.

The Ukrainian was formally charged on Dec 25, and has now been moved to a SIZO.   Lopukhina writes that the militants are thus trying to remove Zhemchugov from the Minsk Agreement. Both in September 2014, and then in February 2015, with the participation of Russian President Vladimir Putin, the parties agreed that the exchange and release must be ensured of all hostages and unlawfully held individuals on an ‘all for all’ basis.

Neither Russia nor its proxies in Donbas have complied with this requirement, and they are now pushing the line that there are no prisoners of war, only people facing criminal proceedings.

These include 60-year-old Ihor Kozlovsky, a renowned religious expert taken hostage on Jan 26 shortly after the self-proclaimed ‘Donetsk people’s republic’ organized a protest against ‘sects’ outside a Greek Catholic Church in Donetsk.

The same situation was seen with Ukrainian volunteer fighter from Makiyivka Yevhen Chudnetsov who was also on Ukraine’s list for exchange.  He was recently ‘convicted’ of “attempting to violently seize power on the republic’s territory” and sentenced to 30 years’ imprisonment.  The scant reports of the alleged trial suggest that his family missed it because it started 30 minutes earlier than scheduled.  It is not clear if anybody has actually seen Chudnetsov except on yet another propaganda video for Russian television from February 2015.  There the signs of torture are clearly visible.

Zhemchugov has faced horrific injuries and placing him in a prison cell could well be equivalent to a death sentence.  His wife begs all those who can bring about his exchange to do so now.  It could soon be too late.