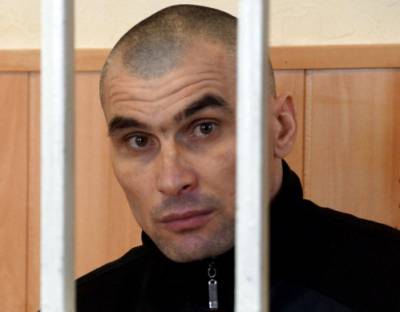 Serhiy Lytvynov, the Luhansk oblast resident abducted in Russia and tortured into confessing to war crimes that never happened, is demanding a formal apology for his unlawful prosecution.  This he has the right to by law, and his lawyer Viktor Parshutkin plans to take the matter to court if Russia’s Prosecutor General fails to react.  This will be the third legal suit since Parshutkin is also about to file a claim on Lytvynov’s behalf for moral compensation and a defamation suit against the pro-Kremlin Rossiya TV channel and its notorious deputy director Dmitry Kiselyov.  They, and other Russian channels broadcast lurid, and totally invented, tales claiming that Lytvynov had murdered 39 victims, including elderly women and young girls.

Lytvynov explains in the statement that he was illegally held in custody from August 20, 2014 to July 8, 2015, on charges of killing 2 or more people, and of using prohibited means of warfare.

“A comprehensive psychological and psycho-physiological forensic assessment from Aug 3, 2015 found that I had been tortured in order to force me to sign the minutes of interrogations drawn up by the investigators with ‘confessions’ to the murder of at least 39 people. The assessment also established that these ‘confessions’ had not been taken from my words, that is, the investigators had falsified the case material.  In view of this, I demand an official apology from the Russian Federation for the harm done me through the prosecution.”

There was far less honesty in the report on Dec 3, 2015 from Russia’s Investigative Committee which had, over a year earlier, reported Lytvynov’s supposed war crimes and even shown Lytvynov ‘confessing’. The Investigative Committee admitted only that the forensic assessments had established that Lytvynov did not suffer from any psychological disorder.

Which means, though is not articulated, that there was another reason why Lytvynov should have signed ‘confessions’ to quite horrific crimes against entirely fictitious women and children.

The Investigative Committee’s lack of honesty is particularly glaring given that Lytvynov had retracted these ‘confessions’ as soon as he was finally allowed a proper lawyer, and had repeatedly stated that they had been extracted through torture.

Lytvynov was also informed of his “right to rehabilitation”, which the Investigative Committee also chose to remain silent about.

The reason is clear.  This right, Parshutkin explains, entitles Lytvynov to 1) demand an apology from the State; 2) compensation for material damages, such as lawyer’s expenses, etc. and 3) moral compensation for his time in prison and torture.

Russia has gravely mistreated Lytvynov and is continuing to do so, both through a second prosecution, as absurd as the first, and through his treatment in the remand prison in Novocherkassk.  Lytvynov is being held in solitary confinement and has only recently even had access to a television, on which he learned of Nadiya Savchenko’s release.  Parhutkin reports that the money passed on by Ukraine’s consul is being taken away and divided up among criminal elements, with the full connivance of the remand prison staff.

The renowned Memorial Human Rights Centre has declared Lytvynov a political prisoner and demanded his immediate release. It calls the cowherd from a Luhansk village near the border with Russia a victim of “the Russian-Ukrainian conflict”, who was used for propaganda purposes.

Memorial was responding to the verdict and sentence handed down by a Rostov ‘court’ on April 20.  Lytvynov was sentenced to 8 and a half years’ maximum security prison on robbery charges that neither the investigators nor the prosecutor even tried to present as plausible.

Lytvynov is 33, and has spent almost 2 years in Russian custody.  He worked as a cowherd in a village in the Luhansk oblast.  In August 2014, he had an inflamed tooth that badly needed treatment, and the clinics he would otherwise have gone to in Ukraine were under Kremlin-backed militant control.  He was advised to try a hospital across the border in the Rostov region in Russia, where he was placed in a Russian ward with militants fighting in Donbas.  He was seized from there and savagely tortured, until he signed ‘confessions’ to multiple war crimes which he was supposed to have committed as a member of the Dnipro volunteer battalion.

Lytvynov has been immensely fortunate in having Viktor Parshutkin represent him. First Parshutkin succeeded in proving that the impugned war crimes had never taken place and could not have since neither the alleged victims, nor their addresses, actually existed. He may have been unable to prevent Russia’s repressive machine from convicting Lytvynov, but he has certainly demonstrated how insulting shoddy and cynical the case was and what this says about Russia’s courts.

Lytvynov was convicted of ‘a crime’ which was only reported a year after it allegedly took place, after the Investigative Committee was forced to withdraw the other charges.

A Russian national, Alexander Lysenko, suddenly appeared and claimed that Lytvynov, together with two unidentified Ukrainian soldiers, had robbed him at gun point.  Lytvynov was supposed to have burst into a house, armed with a machine gun, beaten up Lysenko and stolen two cars.

Lytvynov and his inimitable lawyer are now demanding what is Lytvynov’s right. It is also a chance to highlight his situation, and the torture which Russia has used for its propaganda trials of Ukrainians. 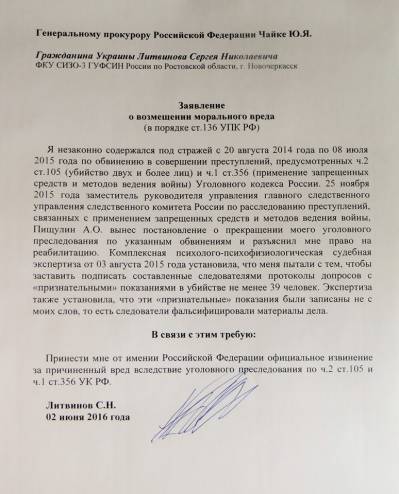