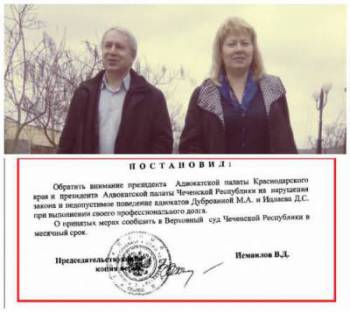 Russia’s contempt for the law demonstrated in the trial of two Ukrainians illegally imprisoned, tortured and sentenced to over 20 years on trumped-up charges has now extended to the lawyers defending them.  The judge in the trial of Mykola Karpyuk and Stanislav Klykh has issued a ‘private ruling’ accusing Karpyuk’s lawyer Dokka Itslayev and Klykh’s - Marina Dubrovina of all kinds of unspecified ‘infringements’.

Euromaidan SOS reports that if you didn’t know anything about the trial, you might think that these lawyers were only there to break the rules. Judge Vakhit Ismailov has accused Dubrovina of not attending one court hearing on a fabricated reason. She had warned the court well in advance, and given a good reason.  Itslayev is  accused of “repeated infringements of procedure during the court hearings”, of obstructing the court in exercising its powers, of interrupting the presiding judge, commenting on the latter’s actions in an improper form”, etc.  There are a lot of words in the accusations, but not one specific case or date and time.

The lawyers have appealed against this extraordinary document to the Supreme Court.  If it was to come into force, then it could result in the lawyers being stripped of their status in this specific case.  Itslayev is in particular danger of this since he is a local Chechen lawyer.

Just before the verdict was due, Grozny television broadcast two items with lies about the case itself, about Ukraine and directly accusing the lawyers and the many rights organizations which have condemned the case of being ‘foreign agents’.

The videos and accompanying text can be found here:

It is clear from these broadcasts that the lawyers themselves were under surveillance and being videoed.

As reported earlier, Ismailov also attempted to foist other lawyers on the men against their will.

Euromaidan SOS also reports that there is an ‘investigation’ now under way into a new charge against Stanislav Klykh – of allegedly ‘insulting’ the judge.

The charge is especially cynical given the very clear evidence that 42-year-old Klykh is in a very disturbed state, which may have been induced by the psychotropic drugs which were applied during the 10 months that he was held totally incommunicado.  The ‘examination’ carried out by people commissioned by the court found no problem, and there has been no possibility of getting an independent examination.

Everything about this case, based solely on confessions tortured out of two men who were held incommunicado and not provided with lawyers, in Karpyuk’s case until the very eve of the ‘trial’, has been chilling, and there is no let-up now. 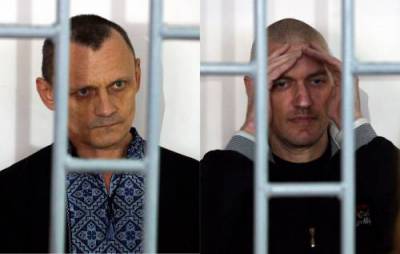 Russia claims that Klykh and 53-year-old Karpyuk took part in fighting in Chechnya 20 years ago and that during battles in Dec 1994 and Jan 1995 they killed a number of Russian soldiers.   Karpyuk was accused of creating and leading a band called ‘Viking’, made up of members of.  Klykh was charged with taking part in it.

There was ample evidence that neither man had set foot in Chechnya before being seized in 2014.

Since both men’s ‘confessions’ included the same insane claims about Ukraine’s former Prime Minister Arseny Yatsenyuk and other prominent Ukrainian politicians, it was extremely easy to prove just what such ‘testimony’ was worth.

It then needed to be asked how they had come to confess to some horrific crimes that never happened, as well as to other deaths of Russian soldiers that, even according to the investigators’ version, they could not have been involved in.

Their allegations of torture, with considerable detail, are now parts of applications already lodged with the European Court of Human Rights.

Ismailov systematically refused to add evidence to the case, including the four-part analysis produced by the highly renowned Memorial Human Rights Centre.  This demolished the indictment and left no doubt about the methods that had been used to extract insane ‘confessions’ to heinous crimes supposedly committed together with Yatsenyuk & Co.   The methods included threats to apply the same torture to Karpyuk’s wife and small child.  Since he had effectively been abducted, it was no surprise that he should have believed this possible.

Despite the alibis, the evidence from Memorial and nothing at all to substantiate the prosecution’s case, a jury found the men guilty.  Karpyuk was sentenced on May 26 to 22.5 years, Klykh to 20 years.  The two lawyers who are now facing reprisals themselves are currently preparing the appeal.

More details about the case, and links to outlines of the Memorial analysis can be found here