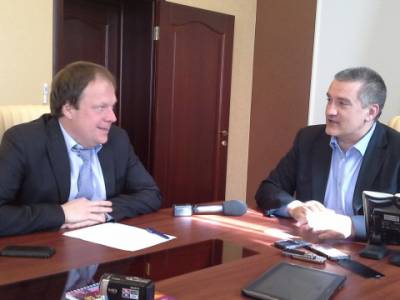 Vladislav Grib, recently appointed a personal representative to the OSCE’s Chairperson-in-Office was directly involved in rubberstamping the scam ‘referendum’ used by Russia to try to justify its invasion and annexation of Crimea in 2014.   His new appointment as personal representative “on combating racism, xenophobia and discrimination”, etc. seems especially inappropriate given his part in warmongering lies in September 2014 which grossly distorted information provided by the OSCE Observer Mission in Ukraine.

Grib’s active role in rubberstamping a fake ‘referendum’ was in no way concealed as the statement issued by the so-called “Civil Control’ organization, with his signature first, makes quite clear.

This statement begins as follows:

No mention is made of the seizure of control by Russian soldiers without insignia who forced a ‘parliamentary session’ at gunpoint, nor of the fact that Ukraine’s Constitution stipulates that any decision changing Ukraine’s territory must be put to a nationwide vote.

The so-called ‘referendum’ was condemned not only by the Crimean Tatar Mejlis, or representative assembly of the largest indigenous people of Crimea, Ukraine’s government and civic bodies, but also by the OSCE, the EU, European Parliament and all democratic countries.

Civil Control, however, found essentially no violations and repeated the unrealistic turnout results which even the Russian Human Rights Council, an advisory body to President Vladimir Putin, have acknowledged were grossly inflated.  There was no criticism of the two ‘choices’ given in this event, neither of which allowed Crimeans to opt for the status quo.  One of the two available options was so unlikely to be understood by voters, that a vote in favour of the other – ‘joining Russia’ – would have still been rigged, even if there had been any grounds for believing in a fair vote count.  There were none.

The ‘observer mission’ was as fraudulent as the referendum itself.  According to Anton Shekhovtsov, a researcher on far-right movements who spotted many of those he monitors at the event, Civil Control was directly involved in coordinating observers.  He says that it recruited the Russian team itself, while turning to ‘friends’ whose organizations have consistently provided their services.  The international group was led by Mateusz Piskorski from the European Centre of Geopolitical Analysis (ECGA).  Piskorski, who is currently under arrest on spying charges in Poland, has for many years now faithfully served as a mouthpiece in support of Putin’s Russia.  Other Russian electoral stunts he has approved were in St Petersburg, Moldova and Donbas.  At least some of the ‘observers’were from the Belgium-based Eurasian Observatory for Democracy and Elections headed by Luc Michel and Jean-Pierre Vandersmissen, both supporters of the neo-Nazi Jean-François Thiriart and members of the extreme right Parti Communautaire National-Européen (PCN-NCP).  The list of observers included representatives of the far-right parties Jobbik (Hungary); Ataka (Bulgaria); Vlaams Belang (Belgium); Freedom Party (Austria) and others. There were also members of neo-Stalinist or extreme left-wing parties, including Germany’s Die Linke.  Two Bundestag deputies from this German party have since twice visited militant-controlled Donbas, providing propaganda stunts for the so-called ‘Donetsk people’s republic’.

Given Grib’s new career move, it is worth noting that the above-mentioned Luc Michel, who has also taken part in similar performances by Kremlin-backed militants in Donbas, was presented by the Russian government-controlled TV Rossiya 24 as from the OSCE.  The latter neither observed nor recognized the alleged results of the event.

It is just conceivable that Grib was sincerely deceived when he became involved in an elaborate pack of lies about ‘mass graves’ in Donbas and alleged Ukrainian war crimes in September 2014.  Others were certainly not, and he himself had ample opportunity to check the OSCE report from September 24, 2014 which spoke of seeing four bodies, and not being able to give any forensic assessment of the sites which were under militant control.

The Russian media went into an orgy of lying which was gross enough to be picked up by the international media.  The latter unfortunately ignored the fact that the same lies about 400 bodies, many raped and tortured, were coming not only from Russia’s Foreign Minister Sergei Lavrov, but also the Russian Investigative Committee.  At around that time, the Investigative Committee had even produced their very own Ukrainian ‘war criminal’ Serhiy Lytvynov whom they – and the Russian media – displayed ‘confessing’ to horrific war crimes.  Lytvynov had been seized and tortured into confessing to raping and murdering woman and children who quite simply had never existed.  When this was proven, Russia came up with a cynically implausible ‘robbery charge’ on which Lytvynov was recently sentenced to 8.5 years’ imprisonment.

Vladislav Grib, as First Deputy Secretary of the Russian Federation’s Civic Chamber also had plenty to say about these supposed ‘mass graves’.  He asserted, for example, that Kyiv would do all it could to hide the truth about a crime “committed with particular brutality, in the spirit of Nazism.”

Anton Shekhovtsov is not alone in wondering how a person who should be on the sanctions list, has been appointed to a post in the OSCE.