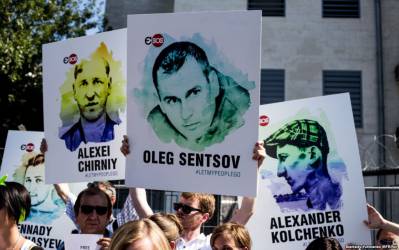 Oleksiy Chyrniy, a Crimean tried illegally in the same case as Ukrainian filmmaker Oleg Sentsov and civic activist Oleksandr Kolchenko has been brought from a Russian prison in Magadan and placed in the Moscow Serbsky Institute.  This is the third time that Chyrniy has undergone assessments at the Institute, however the move now is undoubtedly strange given that he is already serving a 7-year sentence.

Human rights activist Zoya Svetova reported on June 11 that Chyrniy had been brought to Moscow a week earlier.  As a member of the public observer committee, she is able to visit prisoners, but had been unable to find Chyrniy.  She believes that this “special operation” could be aimed at declaring Chyrniy mentally unfit, pardoning him and sending him back to Ukraine for treatment.  “Otherwise, why bring him to Moscow?”, she asks.

It is already known that negotiations are currently underway for the exchange of two other Ukrainian political prisoners, probably for people facing charges over the disturbances in Odesa on May 2, 2014.  Gennady Afanasyev was seized in Crimea shortly after Chyrniy and sentenced in a gravely flawed case to 7 years’ imprisonment.

The other person is Russia’s oldest Ukrainian political prisoner – 74-year-old Yury Soloshenko – who was arrested in August 2014, and tricked and pressured into ‘confessing’ to spying that he could not have committed.  The pensioner from Poltava is in ill-health, and even the outgoing Russian Human Rights Ombudsperson recommended that he be ‘pardoned’ and released.  It is typical that this is being dragged out and he made part of some kind of bargaining.

Chyrniy is one of four opponents of Russia’s invasion and annexation of Crimea who were arrested in May 2014, and held incommunicado for weeks before being taken to Russia.  There on May 30 the FSB [Russian Security Service] claimed that the four men had been involved in a ‘Right Sector terrorist plot’.  The ultra-nationalist Right Sector had been much demonized by pro-Kremlin media since Euromaidan, but there is in fact no evidence that it was ever present in Crimea.  There was certainly no proof that any of the men were members of this, with the idea that Kolchenko, who is a committed left-wing anarchist would have taken part in a far-right movement’s ‘plot’ especially absurd.  Some Right Sector emblem had been found during the search of Chirniy’s room, that was all.

The case entirely hinged on the two ‘confessions’. For (initially) agreeing to ‘cooperate’ with the investigators, both Afanasyev and Chyrniy were tried separately and received the minimum – 7-year - sentence for ‘terrorism’.  Afanasyev did take part in two firebomb incidents against the empty premises of organizations directly helping Russia’s seizure of control in Crimea, while Kolchenko was involved in one.  Memorial has examined the charges and points out that they in no way constitute terrorism, and that similar offences in Russia have been classified as hooliganism and resulted in significantly shorter sentences.

Chyrniy appeared at the trial of Sentsov and Kolchenko on Aug 30, 2015 and refused to testify (and therefore have to answer questions) in court, but did not retract his earlier testimony.

The bombshell came on Aug 31 when Afanasyev took the stand and not only refused to testify in court, but retracted all previous testimony, saying that he had given it under torture.

Although Chyrniy has not been declared a political prisoner, this is only because he did not openly retract this ‘confessions’ and testimony against the others.  All Memorial’s comments about the trial of the others, as well as human rights defenders’ condemnation of the trial of Sentsov and Kolchenko as “ideologically-motivated state terror” against opponents of Russia’s annexation of Crimea apply equally to Chyrniy.

It is extremely worrying that no mention is being made of any possible release of Oleg Sentsov and Oleksandr Kolchenko, although this is required by the Minsk Accord and has been repeatedly demanded by all European structures and democratic countries.

Please write to all four men!