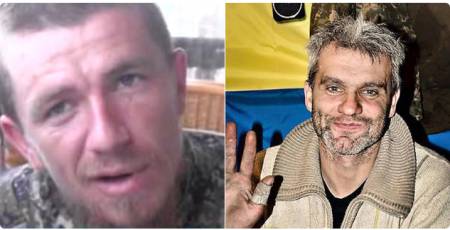 It is an undoubted war crime to murder a prisoner of war in cold blood, and the murder of Donetsk Airport defender Ihor Branovytsky is only one of the crimes which Russian national Arseny Pavlov, otherwise known as Motorola, is suspected of having committed in eastern Ukraine, yet Interpol has decided that Ukraine has ’political motives’ in wanting him caught.  There must surely have been some misunderstanding if, as Ukraine’s SBU [Security Service] reports, Interpol has refused to put Pavlov on its international wanted list.

Vitaly Mayakov, from the SBU is reported to have said that the application was returned on the grounds of ‘the political nature of the Motorola case’.  On this occasion, the SBU’s bemusement is widely shared.  Allegations against Motorola and his own apparent admission of extrajudicial killings prompted Amnesty International to issue a statement back on April 9, 2015 calling for a full investigation.

Ihor Branovytsky was one of the ‘cyborgs’ or Ukrainian soldiers defending Donetsk Airport.  He and other fighters were taken prisoner by Russian / pro-Russian fighters in January 2015.  The militants even posted a video which shows the men alive and without any signs of beating.  Branovytsky could be easily identified as he was wearing a blue jacket, while the other prisoners are all in camouflage.

Ihor’s mother, Nina Branovytska has tried to put together what happened to him after that, based both on the video footage showing him badly beaten, and the accounts given from those who survived and were finally released under exchanges.

Motorola does not appear to have been among those militants who tortured him, with the main person involved having been militant commander Mikhail Tolstykh, better known as Givi, a clear candidate for war crimes charges, as well as two Chechens known as Tanchik and Stalin, and a woman called Vika.

At least two of the ‘Cyborgs’ who were finally released – Oleksandr Mashonkin and Yury Shkabura say that the prisoners’ tormenters included a man wearing the clothes of an Orthodox priest, who used his cross as a means of torture.

Nina Branovytska learned of her son’s death almost immediately from volunteers, but she received only lies from the militants.  They claimed that Ihor was still alive, and that an ‘investigation’ was underway.  His body was only returned at the end of March.  The list of his injuries is very long and make it quite clear why the militants tried to delay returning it as long as possible.

In April 2015 the BBC Ukrainian Service spoke with Yury Sova, who had just been released.  He spoke of his time in captivity and of witnessing Motorola murder Branovytsky.

He explained that he and Branovytsky were among 12 men who had remained at the remains of the airport to care for four injured comrades.  They had no ammunition left, and surrendered on Jan 21, asking the militants to take the injured to hospital.

After the initial encounter with Givi and his people, they were then taken to the basement where Alexander Zakharchenko, leader of the so-called ‘Donetsk people’s republic’ spoke to them and then handed them over to Motorola.

None of this was especially new.  A Kyiv Post journalist had spoken earlier with Motorola on the phone.  The Russian refused to comment on Branovytsky’s murder saying:

Denis Krivosheev, Europe and Central Asia Deputy Director at Amnesty International was reported in the NGO’s statement as saying that “the new evidence of these summary killings confirms what we have suspected for a long time. The question now is: what are the separatist leaders going to do about it?”

The militants have done nothing about these reports, nor about similar allegations against former Russian military intelligence officer Igor Girkin (Strelkov) who played a leading role in the seizure of control in Donbas.  Like Motorola, Girkin has even admitted to extra-judicial executions.  Neither man, nor such notorious neo-Nazi sadists as Aleksei Milchakov, have faced any charges in their native Russia over their actions in Ukraine.   And now, for some reason, Interpol appears to think that Ukraine is pursuing political ends for wanting to try Arseny Pavlov (Motorola) for his believed war crimes.