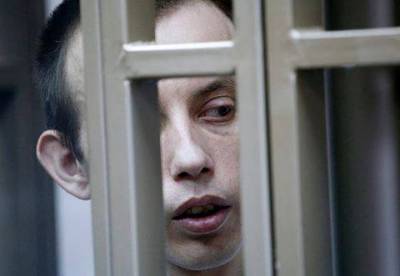 Ruslan Zeitullayev is spending his second birthday in custody, facing absurd charges.  Please help inform the press and your governments of this case - pressure is needed to force Russia to put an end to this terror and help Ruslan and the others return home to their families

With almost all prosecution ‘witnesses’ rejecting their supposed testimony in court, Russia has now pulled out a ‘secret witness’ in its trial of four Crimean Tatars on flawed terrorism charges.  Here too, the testimony given before differs greatly from that provided on June 15, but the irregularities do not stop there.

In breach of the law, neither the investigators nor the court have provided any grounds for concealing the identity of this supposed witness.  When one of the lawyers Emil Kurbedinov objected, he was accused of ‘populism’.

Kurbedinov points out that the witness was also questioned via an audio-link which altered his voice, although you could hear a strong Arab accent.  Russian law allows for a witness to give testimony without being sent, but does not permit a voice to be altered.  The court, however, rejected the defence’s application for the voice to be heard in the original.

This secret individual was supposed to be in the Rostov military court premises where the trial is taking place, yet there was no constant audio connection, as is required by law.  The questioning effectively took place in ‘walkie-talkie’ mode.  The defence believes that this was so that somebody sitting next to the supposed witness told him what to say, and then he pressed the button and answered.  There were long pauses between the defence’s questions, and these responses.

The ‘witness’ also proved suspiciously vague and / or confused about details one might expect him to recall, while having no doubts about the substance of conversation years after they allegedly took place.

The person referred to as ‘Alexander’ claimed to have met Zeitullayev in a mosque in 2013 and to have been told all about Hizb ut-Tahrir.  Since he had claimed that there were several meetings, one of the lawyers asked when the third had taken place.  The alleged witness initially ducked the question, but when pressed went silent for a few moments, then said: “in November 2014.  Asked where, he “couldn’t remember”.  Pressed, he said “in a village”, but “couldn’t remember”.  How then, the lawyer asked, did he remember the subject of the conversations?

Asked when the fourth meeting had taken place, he came up with October 2014 – a month before the third.

The circus with this supposed witness took place on Ruslan Zeitullayev’s birthday, his second spent in custody.  He is accused of ‘organizing’ a terrorist organization, while Nuri Primov, Rustem Vaitov and Ferat Saifullayev are accused of taking part in it.  The charges are based solely on alleged involvement in the Hizb ut-Tahrir organization which is legal in Ukraine and almost all countries.  Russia has declared it ‘terrorist’, without explaining why.

The lack of any evidence that the men were involved in ‘terrorist activities’ was known from the outset.  The hearings are demonstrating that most of the prosecution’s witnesses have nothing incriminating to say about the men at all, with the majority rejecting testimony they were alleged to have given the investigators.

There is no evidence that the men are in fact members of Hizb ut-Tahrir.

There has also never been any good reason provided by Russia’s Supreme Court judgement in 2003 which declared the organization ‘terrorist’.  The authoritative Memorial Human Rights Centre and Sova Centre have both condemned all such trials and Memorial considers all those convicted in these cases to be political prisoners.

Kurbedinov is now representing only Zeitullayev, after the Crimean investigators illegally, and against the men’s own wishes, prevented him from defending them all.  His first report that the prosecution had a number of witnesses from among Crimean Tatars had caused consternation and bemusement.  The situation has proven rather different.  There are three men who have made accusations against the defendants.

Alexander Kozhemyaka is a former Ukrainian Security Service officer who switched sides and is now serving in the Russian FSB.  He claims that all four men are members of Hizb ut-Tahrir.

The defendants all say that Kozhemyaka waged a personal vendetta against them back in his time in the SBU, and that Zeitullayev and Saifullayev had even made complaints about his treatment of them back in 2012.

According to Kurbedinov, there is evidence confirming the men’s account of an attempt to seize control of the men’s community and valuable land on which their building was situated.  SBU officers are said to have helped the individuals involved.

Another ‘witness’ was called in for his supposed knowledge of Hizb ut-Tahrir which he expressed through an emotional rant against the organization.  He claimed that Zeitullayev and Saifullayev were active members, but was unable to give any specific information about the period since Russia’s annexation at all.

Another person, an imam, very clearly had it in for the men, and during the interrogation, Kurbedinov says, it became clear that his testimony was purely guesswork based on his antagonism to the defendants.

Aside from Meryem Zeitullayeva, whose summons to testify against her husband was the height of cynicism and could only be rejected, the other witnesses were risking a great deal by courageously refusing to give false testimony.

One person – Timur Afrandzha had himself faced armed searches in January 2015 and was now frightened to even meet with practising Muslims, etc.  He nonetheless had nothing negative to say about the men, and confirmed that nobody had tried to ‘recruit’ him.

The same was true of Svitlana Frolova; Lenur Arzamatov and Enver Resulyev, as well as three men summoned by the prosecution on June 14.  There was effectively nothing incriminating in their testimony.

Nothing incriminating, that is, against the defendants.  Against those who concocted this case, and who are doubtless hoping for promotions for convicting innocent men, each hearing is an indictment.

This is the first trial since Russia annexed Crimea, but there are now 14 men facing such charges.  There is nothing to suggest that such ‘trials’ held in the Russian Federation are anything more than a formality before passing the monstrously long sentences demanded.

It is therefore of critical importance that this Crimean ‘trial’ gets maximum coverage.