Ukrainian Orthodox Church under attack in Russian-occupied CrimeaUkrainian Orthodox Church may be forced to close in Russian-occupied CrimeaChurch: Ukrainians’ Religious and Cultural Rights under threat in CrimeaFaith under Fire and FSB Surveillance in CrimeaUkrainian Churches are facing imminent ban in CrimeaAll but one faith persecuted in occupied CrimeaHead of a Roman Catholic church driven out of CrimeaOngoing harassment of ethnic Ukrainians, Crimean Tatars & others in CrimeaWhereabouts of four Crimean civic activists still unknownAnother pro-Ukrainian activist disappears in the CrimeaTwo more Ukrainian activists disappear in CrimeaRussia’s increasingly repressive grip on CrimeaRussia, the improbable human rights crusaderPutin’s selective terrorismPro-Russian thugs beat up Ukrainian unity demonstrators – except on Russian TVArmed men cut off Ukrainian channels in DonbasDonetsk television station seized to provide "correct" - Russian - coverageMoscow’s “Voice of the People” in SlovyanskMurdered in SlovyanskUS journalist released, others still held hostage in Slovyansk
• Topics / Freedom of conscience and religion 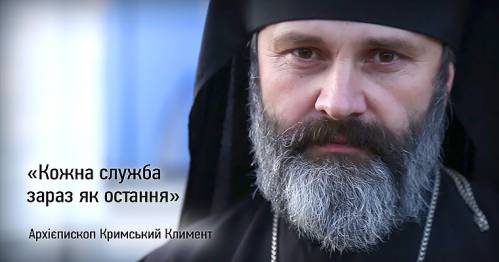 The Sevastopol Court of Appeal under Russian occupation has imposed a steep fine (half a million roubles) on the Crimean Ukrainian Orthodox Church under the Kyiv Patriarchate and upheld the Church’s eviction from the Cathedral of Vladimir and Olga in Simferopol.  The Church has been under intense pressure since Russia first invaded and annexed Crimea, and the fact that the court on June 14 upheld the original ruling from January this year (ordering them to vacate 112 metres on the ground floor of the Cathedral) was unfortunately no surprise.  Archbishop Kliment of Crimea and Simferopol says that they are now awaiting the court bailiffs.

While not daring to provoke international protest by openly banning the Ukrainian Orthodox Church under the Kyiv Patriarchate, the occupation regime has from the outset done everything to drive its clergy and believers away.  The Archbishop reported back in January that the Church was in danger of being dissolved and destroyed because it does not recognize Russia’s annexation and is not prepared to re-register under Russian legislation.

The situation with re-registration is critical for many religious communities.  Russian legislation is more restrictive than Ukrainian with respect to believers, imposing far more onerous demands on bodies wishing to function as a legal entity.  One of the requirements is that the religious organization adds words to its association papers that Crimea is part of Russia which many are not prepared to do.  The lack of such registration means that the communities lose the right to use and dispose of their churches, mosques, places of worship or other buildings, and face numerous other restrictions.

Archbishop Kliment reports that the pressure directly on him has increased, and he has recently received threats.

He is critical of Ukraine’s government which he says is doing nothing to support the Church under the Kyiv Patriarchate in Crimea.  They have still not taken the decision to transfer the ownership of the building in Simferopol where the Church’s administration is based, and the Cathedral of Vladimir and Olga to the Church.  This would at least mean that the Church could defend itself against the actions of the occupation regime in the international courts.

The battle to seize control of the Cathedral of Vladimir and Olga began soon after annexation.  On Jan 14, 2016 the Crimean Arbitration Court issued a ruling ordering the Church under the Kyiv Patriarchate [UOC KP] to vacate the building within the next 10 days, and to pay half a million roubles, supposedly for communal services.  Kliment said then that they would not be moving.  He pointed out that in 2014 he had been offered 200 thousand dollars to vacate the premises.  Now a court order has been used.

Archbishop Kliment says that the number of churches held by UOC KP has halved since Russia annexed Crimea, from 20 to 10.   One of the 10 remaining is a wooden church in Yevpatoria, the construction of which was completed in May 2014.  That church has already faced several arson attacks.

In an earlier appeal to the international community, the Archbishop mentioned the illegal seizures of the Church of the Holy Martyr Clement of Rome in Simferopol and the Church of the Intercession of the Holy Mother of God in the village of Perevalne.  The latter came after a frightening armed attack on the church and believers.  There have also been threats on businesspeople supporting the Kyiv Patriarchate that they could lose their business if they continue to provide premises for places of worship.

14 Crimean Muslims are imprisoned on surreal ‘terrorism’ charges over alleged involvement in the Hizb ut-Tahrir movement which is legal in Ukraine and most other countries.  There have also been frequent armed searches of Crimean Tatar families, religious schools and mosques.

The pressure against both the Ukrainian Orthodox Church and Muslims, the vast majority of whom are Crimean Tatars, seems clearly aimed at driving them from their homeland or at least into cowered silence.