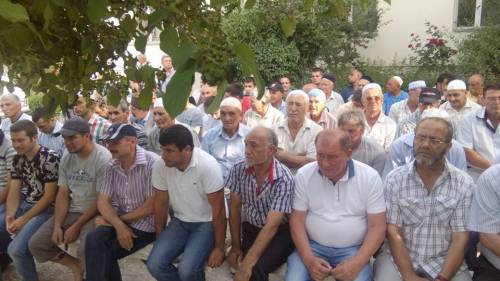 Crimean Tatars gathered on Sunday evening in prayer for the prominent Crimean Tatar activist who was abducted on May 24.  The occupation authorities did not, at least, obstruct the gathering, but they have also done nothing to find this latest victim of forced disappearances since Russia’s annexation of Crimea.

Among those present was Abdureshit Dzhepparov, whose own son Islam was just 19 when he was abducted in Crimea on Sept 27, 2014, together with his 23-year-old cousin Dzhevdet Islamov.  Despite the fact that they were seen being forced into a dark blue Volkswagen Transporter and taken away in the direction of Feodosiya, with the police even having the minivan’s registration number, they have not been seen since.  Abdureshit Dzhepparov is now the coordinator of the Crimean Contact Group on Human Rights.  Another of the members of this group, Emir-Huseyn Kuku has been in custody since February this year facing grotesque ‘terrorism’ charges.  Ervin Ibragimov was abducted the evening before a scheduled court hearing against Crimean Tatars detained for taking part in a remembrance event for the victims of the Deportation.  Ibragimov was planning to attend together with Ulmi Umerov, one of the Crimean Tatar Mejlis [representative assembly] leaders.  Umerov is now facing criminal charges, with a potential 5-year prison sentence, for affirming the international recognized fact that Crimea remains part of Ukraine and Ibragimov has not been seen since being forced against his will into a van.

26 days have passed and hopes of finding the 30-year-old alive are fading.  It remains imperative to highlight his disappearance and publicly demand that the occupation authorities take real measures to find those responsible.  At present, the suspicious unwillingness to even accept the original report of his abduction and lack of any activity suggest either that the de facto authorities are well aware who carried out this latest abduction, or at very least that the ongoing atmosphere of terror suits them.

Last week the EU extended its sanctions against Russia for another year.  Clearly removing them would have been worse, but  much more pressure is needed.  This is not the first abduction and / or disappearance since Russia invaded and occupied Crimea.  It can only be a question of time before the next person disappears while Russia and the occupation regime it installed are allowed to act with impunity.

There is also concern now after strangers appeared late in the evening of June 17 outside the home of Elmira Ablyalimova, wife of imprisoned Crimean Tatar leader and recognized political prisoner Akhtem Chiygoz.  They were observed by neighbours who sounded the alarm, and the men quickly disappeared.  Given the abductions and also a horrific rape and murder of a Crimean Tatar woman recently, Ablyalimova is surely right to be very worried, as is Chiygoz who passed on a letter via his lawyer Nikolai Polozov. 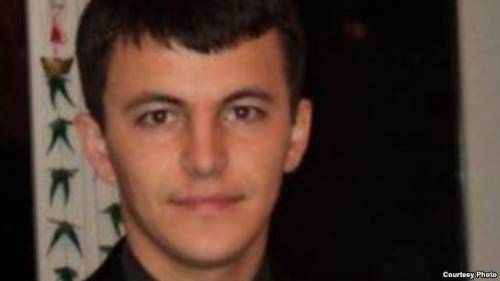 The FSB in Simferopol initially refused to accept the report from Ibragimov’s family and only initiated an ‘investigation’ after hundreds of Crimean Tatars ignored the likely risks under Russian occupation of reprisals and FSB surveillance and gathered outside the police headquarters demanding action in finding Ibragimov.  After publicity outside Crimea, the Russian authorities finally placed Ibragimov on the federal search list, but there is no other evidence that they are making any effort to find him.  As with other disappearances, it is difficult not to suspect that this is because they know exactly who is behind them.

Ibragimov’s family and colleagues have, in contrast, been desperately searching for any links and a reward has been promised for any information.  CCTV recordings have been found that fix the exact time of the abduction between 10 and 11 p.m. on May 24.  The video footage shows a number of cars driving past, as well as a young couple on foot who might possibly remember something.  It seems that at one point, Ibragimov, clearly understanding the danger, tried to flee, but was seized.

Amnesty International has launched an Urgent Appeal in which it asks people to write to the de facto prosecutor Natalya Poklonskaya and Russian-installed head Sergei Aksyonov, urging them to establish and reveal Ibragimov’s whereabouts.

Such letters are important, however pressure is needed on Moscow if an end is to be put to the ever-increasing number of arrests, grotesque ‘trials’ and, most chillingly, the disappearances.

Russia has long been using terror and disappearances inside the Russian Federation, especially in the Northern Caucasus.

Its invasion of another country’s territory over two years ago resulted in a lot of expressions of condemnation, but largely symbolic sanctions.  It has since carried out a blitzkrieg process of eroding fundamental rights in Crimea and terrorising Crimean Tatars and all other Ukrainians who do not support annexation.  There is every indication that the situation will only get worse while objections remain verbal and half-hearted at that.