Judicial Review demanded for Life Prisoners Tortured into ‘Confessing’ to AnythingForced to hunger strike in search of justice for their sonsMaxim Orlov - zero evidence but sentenced to life for good statisticsUkrainian (in)justice: Panasenko serving a life sentence as they needed to convict somebodyUkraine found in bulk violation of the prohibition of torture over denial of justice to life prisonersViktor Lozinsky, the ex-MP convicted of murder, wins in local elections in UkraineUkrainian life sentence – because they needed to arrest somebodyInvestigator involved in Ukraine’s most notorious miscarriage of justice appointed to top prosecutor postWhat judicial reform when it’s not Russia, but Ukraine that refuses to release an innocent life prisoner?Judicial reform dilemma for Zelensky“Exceptional lawlessness requires extraordinary methods”. Ukraine’s leaders urged to free Volodymyr PanasenkoLife sentence for a crime somebody else admitted toLife prisoners freed in court in important first for UkraineUkraine found in violation of the prohibition of torture over treatment of life prisoners10 Ukrainians imprisoned for murders committed by serial killerWhy are Ukrainian legislators willing to see innocent men serve life sentences?In Ukraine a life sentence is for life even when you’re innocentLutsenko is helping block justice for innocent life prisonersUkraine ordered to pay massive damages over police killing and cover upWitty Protest Highlights Critical Choice for Ukraine - Supreme Court Judges or Monsters in Judge’s Robes
• Topics / Against torture and ill-treatment
• Topics / The right to a fair trial 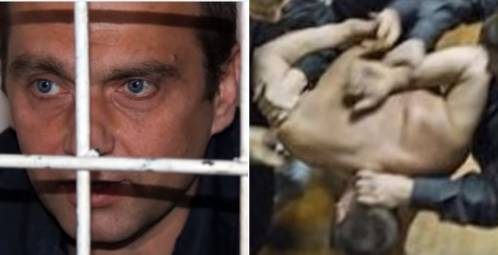 Oleksandr Rafalsky  (From the video here)

Long prison sentences based solely on ‘confessions’ tortured out of people.  Prosecutors who demand long sentences and judges who oblige despite all evidence pointing to the defendant’s innocence.  If this sounds familiar, it should, but not only because of Russia’s treatment of its Ukrainian hostages over the last two years.

There are a large number of Ukrainians serving life or very long sentences in Ukraine based on nothing more than beaten out confessions.  The prosecutors and judges preferred good statistics to justice.

Whether a post-Maidan government has the same disregard for the law is unclear, but they are certainly in no hurry to rectify grave miscarriages of justice.  A draft law No. 2033a tabled back in 2015 which would give life prisoners in such clearly dubious cases a chance of judicial review has stalled after the first reading.  Stalled, or is being deliberately stymied with suspicion rife that the two main factions in parliament may have succumbed to pressure from the Prosecutor General’s Office.  Viktor Chumak, an independent MP and one of the authors of the bill, directly accuses MPs from the Petro Poroshenko Bloc of taking the bill off the agenda under pressure from the Prosecutor General’s Office.

It should be stressed that the law, if passed, would not result in any tsunami of retrials.  Articles in the media suggesting that parliament is being asked or is planning to release ‘murderers’ is either indicative of extremely sloppy journalism or suggests deliberate misinformation to set the public against the bill. The list of grounds for judicial review are clear.  A prisoner or his/her representative would be able to apply for a review of their case if there was no other evidence for convicting them except testimony obtained through illegal means, for example, torture or some benefit gained from testifying against the defendant.  Or if there were grounds for believing that the evidence had been falsified and / or where the court had rejected evidence proving the defendant’s innocence.  A further reason would be if the sentence did not seem proportionate to the case.

In short, we are talking about case with the grave abuses of the law seen in the recent trials in Russia of Oleg Sentsov and Oleksandr Kolchenko, Stanislav Klykh & Mykola Karpyuk, Serhiy Lytvynov and many others.

There are currently 1, 562 life prisoners in Ukraine, with a life sentence to be understood quite literally.  Of these human rights activists believe that around 100 are questionable.

These include Maxim Orlov who was just 21 four years ago when he and 14-year-old Oleksandr Kozlov were convicted of double murder.  The conviction was based solely on Kozlov’s testimony obtained without a lawyer present and through torture.  Orlov is serving a life sentence, Kozlov – 14 years.

Volodymyr Panasenko was convicted of ordering a bomb blast in 2006 which seriously injured the director of the Shuvar Market and killed a young girl who was passing the car that exploded.  The only testimony was from a person who was undergoing treatment for alcoholism in a psychiatric hospital and was forced into ‘testifying’.  He retracted his testimony in court.  Despite the retraction and lack of any other evidence, Panasenko was sentenced to life.

Oleksandr Rafalsky was arrested in June 2001, together with a woman friend and taken to the Central Police Station in Kyiv.  The police methods of ‘interrogation’ allegedly included asphyxiation using a plastic bag over the head, or gas mask with pressure than exerted on the neck and mock executions.

Despite prolonged and intensive torture, he never agreed to sign a ‘confession’.  He was convicted and sentenced to life on the basis of testimony given by two other people in police custody, who were almost certainly put under the same pressure.

The use of torture to obtain evidence is a systemic problem in Ukraine, partly because police assessment was based on how many crimes they could claim to have ‘solved’, with confessions used as confirmation.  The situation was exacerbated by judges who bowed to pressure from the prosecutor’s office and handed down the sentences demanded.  This process of degradation was accelerated during the Viktor Yanukovych regime.

Commitment to reform has been avowed by MPs voted in at post-Maidan elections and by the new Prosecutor General Yury Lutsenko who was himself a victim of selective justice under Yanukovych.  Judicial reviews will undoubtedly mean that the behaviour of individual investigators, prosecutors and judges will need to be investigated.   It will also mean that innocent men go free.

Is this really something that MPs and the Prosecutor General want to be blocking?