Back in the USSR: All ’dissidents’ in occupied Crimea under FSB surveillance’ 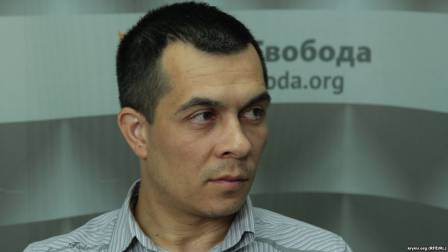 Anybody in Crimea who thinks independently is in a group at risk,  according to Crimean Tatar human rights lawyer Emil Kurbedinov, and is under close surveillance from the Russian FSB.  In an interview appropriately entitled “Defence of the Defenceless”, Kurbedinov explained that the arrests and ongoing detention of 14 Crimean Muslims serve a number of purposes.  None has anything to do with the cause of justice.

The arrests are a form of repression against independent Muslims who have their own point of view on the situation in Crimea and do not follow the Spiritual Directorate of Muslims of Crimea which has chosen to accept Russian annexation.   They are a warning to the Slavonic population to not convert to Islam – as did one of the 14 men, Vadim Siruk, because you could end up a victim of the repressive system.  Since the vast majority are Crimean Tatars who are now presented by the de facto prosecutor Natalya Poklonskaya and pro-Kremlin media as ‘terrorist’, an image is being established of Crimean Tatars as ‘the enemy’.

There is also simply an ‘educational aim’ – to show people in Crimea who is now boss.

Four Crimean Muslims now on trial in Rostov are in danger of very long sentences, with one facing life imprisonment.  The charges are surreal, and backed by no evidence, except the ‘testimony’ of a ‘secret witness’ who couldn’t answer even one question credibly.

The FSB are using purported suspicion of terrorism as the grounds for mass armed searches and arrests.  Such measures can be legitimate where there is evidence that an organization or its members are planning terrorist actions.  In this case, all men – and thus far 14 have been arrested in three separate proceedings – are accused only of involvement in an organization which is legal in Ukraine and most countries (more details here Russia’s Conveyor Belt of Repression in Occupied Crimea).

Russia has never provided any evidence to back the Supreme Court decision in 2003 to declare Hizb ut-Tahrir a terrorist organization. There is no evidence in Ukraine, Russia or any other country of real Hizb ut-Tahrir members having carried out any acts of terrorism.

The four Crimean Muslims, all Crimean Tatars, whose trial began on June 1, are from Sevastopol and have been in custody since Jan 2015.

Ruslan Zeitullayev is 30, married with three small children.  The prosecution claims that he organized a Hizb ut-Tahrir ‘cell’, which Rustem Vaitov; Nuri Primov and Ferat Seifullayev were involved in.  Kurbedinov says that Zeitullaeyv is facing a life sentence.

All charges are emphatically denied, and the ‘proof’ provided pitiful.  In a recent interview, Kurbedinov and another of the lawyers Edem Semedlyaev pointed out other absurdities in the case.

Kurbedinov notes, for example, that in a conversation illicitly taped, the men used the term ‘sokhbet’, which has come to Crimean Tatar from Arabic and means a meeting or discussion.  The prosecution’s ‘expert’ has claimed that the word is only used by members of Hizb ut-Tahrir.

As reported, the prosecution’s ‘witnesses’ have so far also been a disaster.  Aside from a former Ukrainian SBU officer who was involved in a dodgy land dispute involving Zeitullayev and Saifullayev, and is now working for the FSB, the other witnesses have almost all retracted testimony they allegedly gave earlier.

The FSB’s ‘safety net’ is unfortunately proving to be secret witnesses.

So far, one such ‘witness’ has been called.  No grounds have been provided, as is required by law, to justify his testimony behind closed doors.  Even his voice was altered which is not permitted by the Criminal Procedure Code, yet the defence’s application to hear this supposed ‘Aleksandr’ with his real voice was rejected.

The questioning effectively took place in ‘walkie-talkie’ mode.  The defence believes that this was so that somebody sitting next to the supposed witness told him what to say, and then he pressed the button and answered.  There were long pauses between the defence’s questions, and these responses.

This witness speaks with a strong Arab accent, and Kurbedinov says that they suspect they know who it is, though prefer not to make any statement as yet.  The person has proved suspiciously vague and / or confused about details one might expect him to recall, while having no doubts about the substance of conversation years after they allegedly took place.

The person referred to as ‘Alexander’ claimed to have met Zeitullayev in a mosque in 2013 and to have been told all about Hizb ut-Tahrir.  Since he had claimed that there were several meetings, one of the lawyers asked when the third had taken place.  The alleged witness initially ducked the question, but when pressed went silent for a few moments, then said: “in November 2014.  Asked where, he “couldn’t remember”.  Pressed, he said “in a village”, but “couldn’t remember”.  How then, the lawyer asked, did he remember the subject of the conversations?   He then named the fourth meeting as having taken place before the third.

On the basis of such ‘evidence’, Zeitullayev is facing a life sentence, and the other three – 10 years’ imprisonment.

30-year-old Zeitullayev is probably the most publicly active of the four.  He and Saifullayev, an economist, who also has three small children, were active members of the religious community ‘Avdet’.  There is evidence to back their account of the conflict they had with the local Imam over a piece of land.  They went to court in 2012 and were successful.  The Imam’s side did not let up and the SBU were drawn in, with the men being subjected to searches and interrogations.  These came to nothing.  The men believe that the former SBU officer Alexander Kozhemyaka has financial reasons for now claiming that the men are involved in Hizb ut-Tahrir.

Rustem Vaitov is a construction engineer who had recently married and whose wife gave birth to their first child a few months after his arrest.

Nuri Primov is a graduate of the Karpenko Institute in Kyiv and is an actor and film director.

All have now been in custody for over 2 years.  The conditions are terrible, with overcrowding, filth, fleas, etc.  They eat only food received from outside the prison.  This fortunately is no problem, since local Muslims have come to their aid.

The Ukrainian consul has been attending all hearings, but has thus far, in breach of international law, been refused permission to see the men who all remain Ukrainian nationals.

Psychologically, Kurbedinov stresses, the men are holding up and unbroken.

None however expects any justice from a Russian court.  Nor does Kurbedinov.  The case is political as were those in Russia against Nadiya Savchenko, Oleg Sentsov and many others, and the men’s release must be secured in the same way.

The renowned Memorial Human Rights Centre considers all those convicted on ‘Hizb ut-Tahrir’ charges to be political prisoners.  At least one of the men now in custody – Emir-Huseyn Kuku – has almost certainly been arrested because of his human rights activities.  Please help publicize these cases!