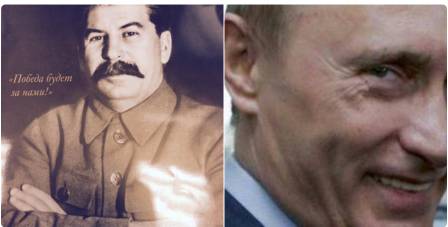 Bloody Soviet dictator Joseph Stalin has not been relegated to the past in today’s Russia.  Not if you judge by the offices of law enforcement officers and investigators, Ivan Pavlov, a human rights lawyer writes.  He has to visit a lot of such offices, and says that one in two will have the tyrant’s portrait. 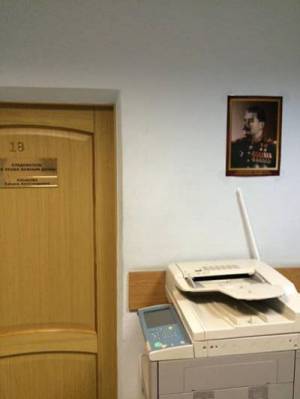 On his Facebook page, he has proposed that colleagues join in the hunt for such photos to “assess the scale of the catastrophe”.   One photo has already appeared, from a police station in Makhachkala.

The number of portraits still needs to be ascertained, but the efforts to ‘rehabilitate’ the dictator, while increasingly muffling information about the millions of his victims, have long been clear.

The result is also apparent.  In March 2015, the Levada Centre reported a dramatic increase in the number of Russians who were willing to justify Stalin.  At the beginning of the 2000s, when Vladimir Putin had only just become President, the majority of Russians still viewed Stalin negatively.  In March 2015, 39% viewed him in a positive light, with 30% of these respecting him; 7% liking him; and 2% - admiring him.  Since 2012 the percentage of respondents viewing the sacrifices which the Soviet people made during the Stalin period as being justified by high goals and by the results achieved had jumped from 25% to 45%. Just imagine if a survey in Germany found that 45% of Germans felt that Hitler’s crimes could be justified by Nazi Germany’s ‘achievements’.

It seems likely that these figures would now be higher following the unashamed glorification of Stalin around the seventieth anniversary of the end of the Second World War in May 2015.

Less than 10 years later, Moscow-based journalist Alec Luhn visited a school in Penza and spoke with young Russian students.  One called Stalin a “great man” and was convinced that nobody had been killed for no reason.  Another was less effusive, but also said that he hadn’t been as terrible as they say.

Stalin’s purges of the military and his myopia over Hitler’s plans make his role in the War anything but heroic, yet this is not the message from the media and school textbooks. Moscow-based BBC correspondent Steve Rosenberg recently reported a ‘Stalin 2016 calendar’, focusing on this inaccurate myth about Stalin as the leader who enabled the Soviet Union to defeat the Nazis.

Over the last year of so, Russia has even been trying to rewrite the Soviet Union’s collaboration with Nazi Germany during the first almost 2 years of the War.  This resulted recently in the surreal court trial and fine imposed on Vladimir Luzgin for reposting a text which stated, quite correctly, that both the USSR and Nazi Germany invaded Poland in 1939.

In March 2015 the plans were first announced – and later unfortunately implemented -  of a museum honouring the murderous dictator in the Tver oblast.  Valentina Sharipova, co-head of the Tver branch of the Memorial Society which began as an initiative to finally uncover the truth about Stalin’s crimes and the fate of his victims, gave a blistering assessment of the whole pathos around reinstating Stalin.  She spoke of tyranny in Russia being like a hereditary disease. “And like a brain tumour, virtually incurable”.

The tumour has also spread with monuments and posters of Stalin appearing in both Russian-occupied Crimea and areas of Donbas under Kremlin-backed militant control.  Within a year of Russia’s invasion and annexation of Crimea,  a monument was unveiled in Yalta to Stalin, British Prime Minister Winston Churchill and US President Franklin Roosevelt.  The move was an open insult to Crimean Tatars whom Stalin had deported as a people in 1944, but is deeply offensive to most Ukrainians.  A plaque to the dictator has also been erected, and his image is quite often seen at various public events.

The moves to whitewash Stalin have coincided with measures aimed at concealing information about his crimes.  The notorious Perm 36 Labour Camp which had provided vital information about the GULAG was temporarily closed, then opened effectively eulogising those who administered the repression.

In April 2016 Putin announced that he was taking the Federal Archives under his personal control.

Why is not clear, but his regime has already put the archives of all the secret police [officially ’state security’] bodies (Cheka, NKVD, KGB, etc.) under lock and key for another 30 years.  This includes the vast bulk of material regarding the Great Terror of 1937-1938.

Hide the evidence and the victims, twist the focus and you have a firm leader who “made the country great”.  No accident that Putin has reinstated the powers of the Security Service removed after Stalin’s death and the state propaganda machine.   Sharipova was surely right in suggesting that all this is about “propping up the glory of our modern general Putin of Crimea.  To draw parallels, so to speak”.