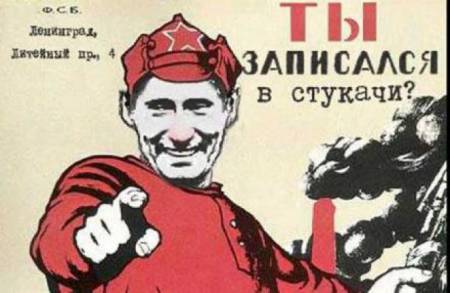 Have you registered as an informant?  (Source: Ominform.com.ua/)

Russia has criminalized not denouncing people, with terrifying implications for the many politically motivated and / or fabricated criminal cases against Crimean Muslims, Crimean Tatars and any Ukrainians opposing Russia’s occupation of Crimea

The so-called counterterrorism legislation which Russian President Vladimir Putin signed on July 7 is to come into force on July 20, with devastating effect on the already dire human rights situation in Russian-occupied Crimea, as well as in Russia.  The amendments to Russian legislation make steep increases in the size of sentences on highly questionable charges of ‘terrorism’ or ‘extremism’, extend even further the list of activities falling under such categories, and also introduce other elements hearkening back to the worst Soviet repression.  Rights groups believe that the new law is aimed at establishing total control.

Russia has long abused norms of the Criminal Code on terrorism, and on so-called ‘extremism’, with these frequently used to imprison opponents.  Three Crimean opponents of annexation – Ukrainian filmmaker Oleg Sentsov, civic activist Oleksandr Kolchenko and Oleksiy Chirniy - are currently serving long sentences in Russia for ‘terrorism’ with neither the Russian prosecutor nor the court showing interest in the lack of any evidence at all and the compelling grounds for believing that the testimony used to convict the men had been obtained through torture.

14 Ukrainians, almost all Crimean Tatars, are in custody or on trial charged with unproven involvement in Hizb ut-Tahrir, an organization which is legal in Ukraine and in most countries, but which Russia once declared ‘terrorist’, without explaining why.  There is no proof of involvement, nor of any terrorist activities yet convictions are virtually inevitable.  The sentences the men face for nothing have just been increased by a further 10 years.

The sentences have become much steeper for whatever the regime chooses to view as ‘extremist’.

In April 2016, Russia declared the Crimean Tatar Mejlis, the representative assembly of the main indigenous people of Crimea, an ‘extremist organization’.  The Mejlis has lodged an appeal against this.  If, as unfortunately expected, this is rejected, all activities which investigators choose to call ‘organizing’ such an ‘organization’ will  carry a sentence of up to 8 years.  Since no answer was ever provided as to whether regional and autonomous mejlis bodies were also included, well over 2 thousand Crimean Tatars could face ‘extremism’ charges.

At least two Ukrainians - Crimean Tatar Mejlis leader Ilmi Umerov and journalist Mykola Semena are also facing criminal charges of making “public calls to actions aimed at violating the Russian Federation’s territorial integrity” via the Internet (Article 280.1 § 2).  These are linked solely with statements essentially affirming that Crimea is and should remain Ukraine, but will now almost certainly entail prison sentences. There is dangerously little information about Yury Ilchenko who has now been in detention for over a year, almost certainly in connection with critical blogs.

The ‘Yarovaya’ bill, named after the deputy notorious for legislating repression, has now made politically motivated sentences considerably easier to orchestrate and implement since there do not appear to have been any acquittals on ‘extremism’ charges.

A new article – 205.6 ‘Failure to inform of a crime’ – has been added to the Criminal Code, with this carrying a sentence of up to one year’s imprisonment.  The Crimean Human Rights Group has commented that this is a very dangerous article given the situation in Crimea.  It encourages denunciations and could mean that many people will try to inform about anything in case it could be considered ‘terrorist activity’. The rights activists note that even without this article, there have been cases where searches were carried out, etc. after somebody reported something ‘strange’.

More chillingly, the law will make it possible to prosecute anybody (except relatives) who knows, lives near, etc. a person arrested on charges of involvement in Hizb ut-Tahrir.  There is no evidence that the people now in custody have anything at all to do with Hizb ut-Tahrir.  Threaten a neighbour that he too could end up in prison if he doesn’t inform against the person, and some will be found prepared to give the lies demanded.

Given the lack of any legal clarity in the norm, the scope for abuse is enormous, as is the scope for near total surveillance provided by other changes made, with grave implications for freedom of speech.

There is also another frightening flashback to the worst Soviet days.  Criminal liability for crimes ‘of a terrorist nature’ will now begin from the age of 14.

A 14-year-old, for example, could face a one-year prison sentence for ‘failing to inform’ the FSB about a meeting in support of removing the internationally condemned ban on the Crimean Tatar Mejlis. A very young person could also face a long sentence for supposedly participating in mass unrest, with this quite conceivably mean taking part in a peaceful anti-government demonstration.

It may well be true that the imposition of such draconian measures indicates the Putin regime’s weakness.  The measures, however, will still be used and abused, both in Russia and Russian-occupied Crimea.