Zelensky’s proposed ‘reform’ of the Security Service fails badly on both reform and human rightsPost-election Ukraine. More of the same or a new human rights agenda?Ukrainian prisoners can get years added to their sentence for demanding their rightsThe Only Way to Improve Ukraine’s CourtsPresidential Administration Says Law Requiring Activists to Disclose Assets Is Invalid and Unenforceable, but Ukraine’s Activists Aren’t Buying ItAll judges dismissed for persecution of Maidan activists likely to be reinstatedPoroshenko accused of creating a weapon against critical NGOs, like in Russia & KazakhstanNine Things Ukraine Should Do in 2018Ukraine’s ‘party dictatorship’ law for removing inconvenient MPs revoked as unconstitutionalWill Ukraine’s Parliament Accomplish Anything This Fall?Human rights groups warn of dangerous legislative offensive against NGOs in UkraineHow Ukraine Can Win the Revolution AgainRehabilitation Package of Reforms slams discriminatory bills on NGO public reportingPublic Integrity Council negative opinions should be grounds for disqualifying Supreme Court candidatesWhat Will Ukraine’s Next Big Reform Be?RPR: Party quotas must not be applied in appointing new Human Rights CommissionerPoroshenko signs anti-Maidan law against NGOs & journalists fighting corruptionParliament pass law that could help Yanukovych avoid justice while hurting UkrainiansThree years after the Revolution of Dignity: Why reforms are slowing, and how to prevent backtrackingUkraine’s Parliament slips in dangerous carte blanche for blocking torture investigations
• Topics / Human rights protection 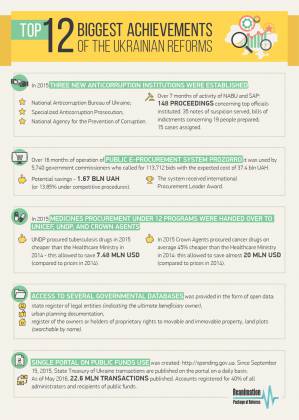 The Reanimation Package of Reforms [RPR] has put together a list of key reforms .  It states that despite huge resistance, Ukrainian reforms do produce tangible results and civil society will continue to push for these changes to become irreversible.

In 2014, the required legislation was adopted, and in 2015 three new anticorruption institutions were launched:

The National Agency for the Prevention of Corruption (functions: the development and implementation of the governmental anticorruption policy, the verification of declarations, and the monitoring of lifestyles of officials in order to identify lies in their declarations and unjust enrichment).

The heads of all these institutions are selected through open competition.

The institutions are fully functional, with the staff being recruited and trained on an ongoing basis.

As of June 2016, with over 7 months of activity of NABU and SAP, 148 proceedings (concerning leaders of state-owned enterprises, prosecutors, judges, civil servants of “A” category, and other officials) have been instituted. 35 notes of suspicion have been served, bills of indictments concerning 19 people have been prepared; 15 cases have been assigned (of which 8 cases concern judges).

The system of public e-procurement ProZorro was launched on February 12, 2015 (operating for 16 months). Over this period of time, the system was used by 5, 740 government commissioners who called for 113, 712 bids with the expected cost of 37.4 billion UAH. Potential savings amount to 1.67 billion UAH (or 13.85% under competitive procedures).

In 2015, the Ministry of Healthcare handed over medicines procurement under 12 governmental programs to three international organizations: UNICEF, UNDP, and Crown Agents. As a result of the procurement of tuberculosis drugs, performed by UNDP in 2015, about 1 million USD was saved (from the primary budget). Thus, another 28, 000 patients will be able to receive treatments because of these savings.

In 2015-2016, a number of legislative initiatives were adopted and implemented. As a result,  access was opened to several governmental databases of social significance (data on public procurement, the state register of legal entities and individual entrepreneurs indicating the ultimate beneficiary owner, urban planning documentation, etc.). In addition, data on the owners or holders of proprietary rights to movable and immovable property and land plots has become open (searchable by name). This data is available on the Internet.

These changes contribute to the protection of property rights as well as the exposure of corruption and unjust enrichment of public officials. In addition, Ukraine is one of the first countries to set such high standards of transparency of data of social significance.

A single portal on public funds use was created. It presents data on the use of public funds by governmental agencies as well as state-owned and municipal enterprises: http://spending.gov.ua. This resource allows anyone to monitor whether public funds are effectively used.

Since September 15, 2015, all transactions made by the State Treasury of Ukraine through a single state treasury account (other than transactions with security classification and those related to the national defense capability) are published on the portal on a daily basis. As of May 2016, 22.6 million transactions of the State Treasury have been published on the website. Accounts have been registered for 40% of all administrators and recipients of public funds, while the volume of information has increased up to 88%. At its peak, the portal receives  65-85 thousand visits a day.

Since April 1,  Ukrainian TV channels and radio stations have been publishing information about their ultimate beneficiaries and owners. Television and radio have a considerable influence on Ukrainian politics, but it used to be difficult to determine the real owners of national and local television channels. Although open governmental registers do disclose part of the information about the media, their presence in the structure of the ownership of offshore entities did not allow citizens to clearly determine exactly whose interests are served by the editorial policy of the TV channels. Now the data on the ownership structure (including foreign entities), the changes in this structure over the year, and the information about all of the direct and indirect shareholders of TV channels over the course of the financial year shall be published annually.

Apart from the establishment of new anti-corruption institutions, one of the most corrupt services – patrol and inspection service and the State Automobile Inspectorate – are being transformed into the new patrol police as part of the reform of law enforcement agencies. Candidates for the patrol police officers are also selected through transparent competition, with the selection commissions including representatives of the public. The first two-thousand patrol police officers took their oaths in July 2015 in Kyiv, while over the course of the year about thirteen thousand patrol police started to work in three regions – Lviv, Kyiv, Kharkiv – and in 32 cities of Ukraine (including those in the near-front zone – Kramatorsk, Sloviansk, Mariupol).

The legislation required for the decentralization reform was adopted in early 2015. According to the Law of Ukraine “On voluntary amalgamation of territorial communities, ” the regional state administrations have developed, and the regional councils have approved long-term plans of forming capable communities in 23 regions (except for Zakarpattia region).

Contracts concluded with the European gas suppliers allowed Ukraine to diversify gas supply and dramatically reduce the amount of the Russian gas consumed. In 2013, the share of Russian gas in the Ukrainian imports reached 92%, in 2014 it decreased to 74%, whereas in 2015 – to 37%. As of June 14, 2016, Ukraine has not imported any Russian gas whatsoever for 200 days.

A number of measures have been taken to promote energy saving in Ukraine. In particular, a governmental program on the partial reimbursement of the principal amount of the loan (30-40%) taken to ensure energy efficiency of private homes and apartment buildings managed by the associations of co-owners was introduced. As of April 2016, Ukrainians have taken out loans for energy modernization for the total amount of 1.35 billion UAH.

In addition, action has been taken to eliminate cross subsidies in energy sector through closing the gap between the prices for industrial and domestic consumers. Before the reform, the prices of gas for industry and population with district heating providers were differentiated, which created the risk of corruption schemes, excessive consumption in the domestic sector, social injustice (the government equally subsidized both the homes of low-income villagers and the estates of oligarchs), and significant deficit of Naftogaz NJSC (87 billion UAH in 2014). As a result of the reform, a single maximum rate of retail prices for natural gas for the population has been set at the market rate – 6, 879 UAH per thousand cubic meters. It is planned to completely abandon the administratively regulated prices and move to market prices by April 1, 2017. A system of subsidies was developed to support the low-income households. Naftogaz NJSC expects to have a deficit-free budget in 2016.

The Ukrainian parliament adopted amendments to the Constitution of Ukraine in part of the judicial system, as well as one of the first implementation laws “On the judicial system and the status of judges.” The constitutional amendments received a positive opinion from the Venice Commission; they meet the recommendations of the Council of Europe regarding the independence and accountability of judges, as well as the principles of operation of the prosecutor’s office. The relevant law shapes the conditions for the renewal of the judicial system, including the establishment of a new Supreme Court with a fully updated panel of judges selected through competition. It also sets higher standards of judicial independence and ensures greater transparency and public accountability of judges.

A number of important steps towards the democratization of the political system have been taken. Electronic appeal and electronic petition as tools of public influence on the national and local policy-making have been introduced. The citizens of Ukraine have an opportunity to initiate and endorse petitions on urgent issues to the President of Ukraine (25 thousand signatures), the Kyiv City Council (10 thousand signatures), and other agencies. Moreover, a mandatory roll-call vote of deputies of local councils and publication of the results of voting have been introduced to strengthen the responsibility of local MPs to their electors.

The RPR has prepared this analytical report using the materials of the Transparency International Ukraine, the Anticorruption Action Center, CF “Patients of Ukraine”, the Eidos Center for Political Studies and Analysis, the Ukrainian Center for Independent Political Research, and the Center for Economic Strategy.