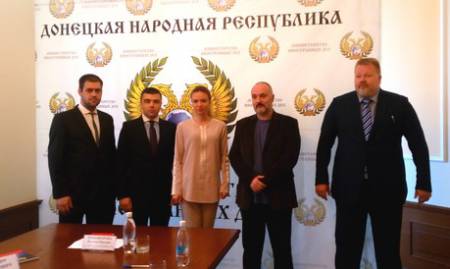 A “delegation of foreign observers from Finland and Serbia” has visited the so-called ‘Donetsk people’s republic’ [DNR] as part of an elaborate, if farcical, attempt by the Kremlin-backed militants to bypass the commitments agreed in Minsk for holding local elections.  Instead of providing the compliance with the Minsk Accords that would enable the holding of real elections, the militants have blamed Ukraine’s government for preventing them, and is instead planning to hold what it calls ‘preliminary elections’ or ‘primaries’.

Such ‘primaries’, the militant leader Alexander Zakharchenko claimed back in May 2016, will enable selection of “the worthiest candidates for local elections”.  He asserted that those later elections would then be held in accordance with the Minsk Agreement. Such ‘primaries’ are, however in themselves, a breach of that agreement which stipulates that the elections must comply with Ukrainian law, without the militants determining in advance who takes part.

The May 23 report posted on the DNR news agency website quoted an unnamed source close to Zakharchenko as saying that the decision had been taken after a meeting with Russian President Vladimir Putin’s advisor Vladislav Surkov.  He is widely understood to be in charge of dealing with the militants Moscow claims officially to have nothing to do with.  Surkov was reported to have approved the plan for ‘primaries’ and intended to recommend them for the ‘Luhansk people’s republic’ [LNR] as well.

The whole process was presented then as “good training”.  Denis Pushilin, another DNR leader and participant in the Minsk talks, claimed that they would elicit “a positive reaction in Russia, the EU and USA” who were supposed to understand that this was a step towards implementation of the Minsk complex of measures.

Appreciation of such a ‘step’ was, admittedly made unlikely by Zakharchenko’s aggressive rejection of any international armed mission ensuring safety at the elections.  He threatened to attack any such mission as “aggression against DNR.

If you listened to DNR ‘acting foreign minister’ Natalya Nikonorova talking about the ‘primaries’ and the role of the ‘foreign observers’ on July 11, you could be temporarily deceived.  It all sounded wonderful, with assurances about “fair, transparent, unbiased coverage of the process”, “equal access”, etc.

The visit of Bäckman, together with Serbian nationalists Miodrag Zarković, Goran Milenković and Dejan Dzakula, was important, she claimed, “since the presence of foreign observers at any vote increases the level of trust to the process itself. We welcome the decision of the Europeans to visit the Donetsk people’s republic and hope that in their conclusions they will give us specific recommendations on holding the vote in accordance with all international norms and standards”.  The current delegation was soon to be joined by “representatives of Germany, Italy, Romania, France and other European countries”.

The addresses given by both Bäckman and Zarković left little doubt about what kind of “impartial coverage” they were there to provide.

Speaking in Russian, Bäckman, described by all DNR sources as a “famous human rights activist, political analyst and civic activist, spoke of how a new state was in the process of being formed.  The West was unhappy about this, he asserted, and there was constant aggression from Ukraine against the population of Donbas.  Bäckman claims that Ukraine’s main aim is “to stop democratic processes in Donbas”. He says that he has been in DNR a number of times “during the first two years of the young republic” and is basically effusive in his praise.

Zarković was equally positive, though seemingly less aware of where he was, stating that this “is the first time I’m in Russia, or Belarus”.

All the visitors had, doubtless, crossed illegally into Ukraine from Russia. We can only speculate whether they received the generous treatment of those ‘observers’ brought to Donbas via Moscow for the first illegal ‘elections’ at the beginning of November 2014.

Those ‘elections’ were treated with all seriousness by the Russian media with much made of the ‘international observers’ present, with Russia Today claiming there to be as many as 300.  The day before it was announced that these observers were from something called ASCE [the Agency for Security and Cooperation in Europe].  This was an obvious attempt to deceive people since the name sounds very similar to the OSCE, which unlike ‘ASCE’ does exist.  Like during the Crimean ‘referendum’, there were a number of invited ‘observers’ from far-right or Stalinist parties, all with a pronounced pro-Kremlin position.

There were also vegetables in abundance. These were almost certainly brought in specially by one of the Russia’s so-called ‘humanitarian convoys’, and sold like in Soviet days, 3 bags per person, with this used to entice people to take part in the ‘vote’.   News of Donbas reported that you could vote by presenting a copy of your passport, rather than the original and where you wanted.  For the free refreshments and cheap vegetables, people may well have ‘voted’ many times.

Even Russia in the end found it best not to recognize the ‘electoral results’ of such a market day event.  By then, however, all the ‘observers’ had managed to find it all impeccably democratic.  As Bäckman & Co made quite clear at the press conference on Monday, the same can be expected from them.

While the ‘observers’ and the militants themselves are all out to prove that Ukraine is stopping the elections, in January this year Zakharchenko stated that Ukrainian parties would not be allowed to take part in their local elections.

Then on March 18, he categorically rejected any elections held in accordance with Ukrainian legislation, but claimed that they would be “according to international OSCE standards”.