Ukrainians Beware! Avoiding Arrest in Russian-Occupied Crimea in the Face of Mounting Repression 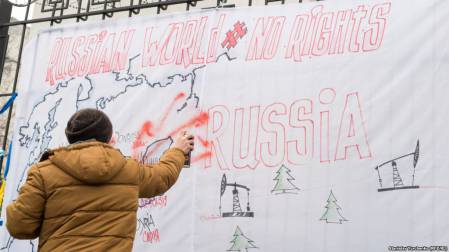 New FSB interrogations only confirm the need for the advice just issued by the Crimean Human Rights Group for Ukrainians wanting to avoid being arrested for ‘extremist’ views such as Crimea is Ukraine.

On the same day that human rights activists published advice to help Ukrainians avoid persecution while visiting Russian-occupied Crimea, the FSB  detained one pro-Ukrainian activist and summoned the head of the Ukrainian Cultural Centre for questioning.

Larisa Kitaiska, a 52-year-old Crimean businesswoman and Maidan activist, now living in Kyiv, arrived in Yalta a couple of weeks ago.  The FSB appeared some time on Monday and took her away, returning later with her and carrying out a search of the flat.  It remains unclear how long she was held for.  On Tuesday her daughter informed the Crimean Human Rights Group that the FSB are trying to take her parents, as two other members of the family away for questioning.  This, they claim, is in connection with so-called “extremist statements on social networks”

Given Kitaiska’s strongly pro-Ukrainian position, concern is warranted.  Russia has already initiated a number of criminal prosecutions against Ukrainians, including Crimean Tatar leader Ilmi Umerov and journalist Mykola Semena over what it qualifies as “public calls to action aimed at violating Russia’s territorial integrity”.  A new law criminalizing such ‘calls’, which came into force in May 2014 is, as predicted, being used against opponents of Russia’s annexation of Crimea.

Umerov, the Deputy Head of the Crimean Tatar Mejlis or representative assembly is charged under Article 280.1 of Russia’s criminal code with the alleged public calls to violate Russia’s territorial integrity translating into his statement that Russia must be forced to withdraw from Crimea and Donbas.  Semena, whose computer activities were clearly under 24-hour surveillance, is supposed to have encroached on the same ‘territorial integrity’ by supporting the civic blockade of Crimea.

Leonid Kuzmin was summoned for questioning on Monday and forced to sign an undertaking not to divulge any details.  He told Krym.Realii that the interrogation had lasted an hour and a half, and that he could say only that the questioning concerned his civic activities in the Ukrainian Cultural Centre.  He had not been informed of any criminal proceedings having been initiated.  The Centre’s activities are aimed at preserving Ukrainian culture and language.  The founders have no political aims, it is stressed.

Kuzmin has already been subjected to repressive measures, as well as physical attack because of his pro-Ukrainian position. In March 2015, he and three other Ukrainians, one a veteran of the Crimean Tatar national movement, were detained at (or in one case, after) an entirely peaceful action marking the 201st anniversary of the birth of Ukrainian poet Taras Shevchenko.  The de facto authorities had refused to allow the gathering to be held, as in previous years, at the monument to Shevchenko.  The detentions were over Ukrainian flags, and Ukrainian colours.  The men were sentenced to 40 hours of community work for holding what the police claimed were ‘prohibited symbols’.  Kuzmin also lost his job as a teacher and was also the victim of an attack.

The young Ukrainian remains courageously true to his views and is not deterred from expressing them.  Since the FSB will be following his movements very closely, it is possible that the interrogation was linked with a Facebook entry from July 15 in which he expressed support for the idea of creating a Crimean Government in Exile.  He believes that such a body could increase the levers of influence on Crimea and its residents.

In its advice to Ukrainians visiting Crimea, the Crimean Human Rights Group warned that the FSB closely follows social networks, and that even reposts can be dangerous.

Russia’s ‘anti-extremist’ and ‘counter-terrorist’ legislation, the rights activists warn, is dangerously vague, applied selectively and for political reasons.  It is, furthermore, impossible to hope for any fair judicial assessment in Crimea at present.

If you have decided to travel to Crimea, therefore, you must take certain precautionary measures.  This is especially vital for civic activists, journalists, people who took part in Maidan or Ukrainian volunteer movements.

Suspend all social network accounts since these are closely followed, with any criticism of the Russian authorities, any publications expressing a pro-Ukrainian position, photos from Maidan, or with Ukrainian soldiers, etc. can end up qualified by the Russian FSB as ‘extremist’ or ‘terrorist’. The FSB will also pay attention to who your friends are on social networks.

Advice is given on cyber security if you are unable to suspend your account.  The activists repeat advice given by Ukraine’s Security Service, warning Ukrainians to steer clear of VKontakte and a few other networks which are closely monitored by the FSB.  They should be aware that even material which has been deleted on VKontakte will remain accessible to the Russian security service, including private messages and chats.

All of this is very Soviet, but none more chillingly so then the warning that the people you speak with in Crimea could write a denunciation to the FSB against you, with this positively encouraged now by the occupation authorities. The Crimean Human Rights Group is aware of such denunciations having been made against neighbours, friends or even relatives.  This is now encouraged by Russia’s very legislation, with the new draconian ‘counter-terrorism’ law including punishment of up to a year for not informing against people who could have been arrested on highly dubious, politically motivated charges.

If you do get detained or called in for questioning, do not sign a thing and insist of speaking to a lawyer.

The advice is an appalling indictment of the Russian occupation regime, especially given that the cases of persecution and lawless trials of opponents of annexation make every word of immediate relevance.