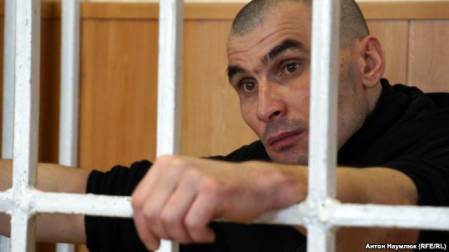 The Rostov regional court has rejected the appeal brought by Ukrainian political prisoner Serhiy Lytvynov against his 8.5-year sentence.  The charges had been openly implausible and only laid after Russia was forced to withdraw the original ‘war crimes’ indictment, but unfortunately the ruling on August 9 was anticipated.  The next step, Lytvynov’s lawyer says, will be the European Court of Human Rights in Strasbourg.

For all that Russia has held Lytvynov in detention for 2 years and is refusing to release him, it is not having an easy time of it.  The Ukrainian cowherd from the Luhansk oblast who was abducted in Russia and tortured into confessing to war crimes that never happened has lodged a formal demand for 3.3 million roubles in compensation.  Lytvynov may still be imprisoned on equally absurd charges, however this legal suit is in dead earnest with Lytvynov entitled under Russian legislation to damages.

Lytvynov’s lawyer Viktor Parshutkin lodged the formal suit on July 21, 2016 with the Basmanny District Court in Moscow.  He points out in the document that on Nov 25, 2015, the Russian Investigative Committee formally terminated the criminal prosecution against Lytvynov over supposed “use of prohibited methods of warfare and mass murder of residents of the Luhansk oblast in Ukraine”.  The charges were, in fact, dropped on July 8, and the damages are demanded in the first instance over his illegal detention from August 22, 2014 to July 8, 2015.

On August 3, 2015 a comprehensive psychological and psycho-physiological forensic assessment was carried out with this confirming that Lytvynov had been subjected to torture.

Parshutkin points out that a formal request for an apology from Russia was sent to the Russian Prosecutor General Yury Chaika on June 2, 2016.

The 3.3 million roubles demanded was broken down as follows: 1 million is for the illegal detention; 2 million for the torture; and 300 thousand roubles in compensation for the refusal to issue an official apology on behalf of the Russian State.

In fact, it appears that the legally required apology has now been provided, so the Russian state is now being sued for a mere 3 million roubles.

Parshutkin is also planning to file a defamation suit against the pro-Kremlin Rossiya TV channel and its notorious deputy director Dmitry Kiselyov.  They, and other Russian channels broadcast lurid, and totally invented, tales claiming that Lytvynov had murdered 39 victims, including elderly women and young girls.

So why should a person of sane mind sign ‘confessions’ to monstrous crimes against entirely fictitious women and children. The Investigative Committee chose to ignore the fact that Lytvynov had retracted the ‘confessions’ as soon as he was finally allowed a proper lawyer, and had repeatedly stated that they had been extracted through torture.

In accordance with Russian legislation, Lytvynov is now entitled to ‘rehabilitation’, with this including: 1. An official apology 2. Compensation for material damages, such as lawyer’s expenses, etc. and 3) moral compensation for his time in prison and torture.

As reported earlier, Russia is continuing to mistreat Lytvynov, both through a second grotesque prosecution, and through his treatment, including solitary confinement, in the Novocherkassk remand prison.

Lytvynov is 33, and will have soon spent 2 years in Russian captivity.  A cowherd from a village in the Luhansk oblast, he was forced to cross the border into Russia in August 2014 because of a badly inflamed tooth.  He was unable to seek treatment in the nearest Ukrainian clinics, since these had been seized by Kremlin-backed militants.  He ended up in a hospital across the border in the Rostov region in Russia, where he was placed in a Russian ward with militants fighting in Donbas.  He was seized from there and savagely tortured, until he signed ‘confessions’ to multiple war crimes which he was supposed to have committed as a member of the Dnipro volunteer battalion.

Lytvynov was extremely fortunate to have Parshutkin take on the case.  It was thanks to him and Ukrainian rights activists that the supposed war crimes were proven to be a shoddy fiction, with neither the alleged victims, nor their addresses, having ever existed.

Instead of releasing Lytvynov, the investigators came up with a story which was just as insultingly implausible.

Immediately after the Investigative Committee was forced to withdraw the other charges, a Russian national, Alexander Lysenko, suddenly appeared and claimed that Lytvynov, together with two unidentified Ukrainian soldiers, had robbed him at gun point.  Lytvynov was supposed to have burst into a house, armed with a machine gun, beaten up Lysenko and stolen two cars.

There was virtually no attempt to make the charges seem plausible and every aspect of this new ‘case’ was demolished in court, yet Lytvynov was still sentenced to 8.5 years’ imprisonment.  The Memorial Human Rights Centre responded by declaring Lytvynov a political prisoner and demanding his immediate release.