An Orthodox Procession with Political Aims? 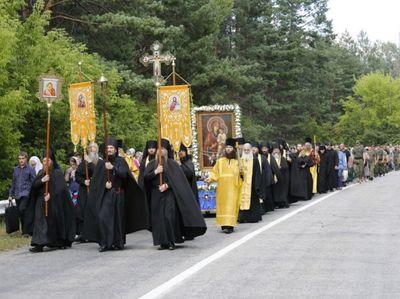 As believers arrive in Kyiv, views remain sharply divided on both the controversial religious procession organized by the Orthodox Church under the Moscow Patriarchate and how the Ukrainian authorities should have dealt with it. Two processions headed off on foot early in July of believers and priests from the Ukrainian Orthodox Church under the Moscow Patriarchate [OUC MP].  The two processions, one from the western Ternopyl oblast, the others from the Donetsk oblast in the East of the country were to reach Volodymyr Hill on July 27, the eve of the Festival of the Baptism of Kyivan Rus.  Doubts have been expressed from the beginning about the motives behind the event and how real a religious pilgrimage is when coaches with air conditioning are being laid on to bring believers from the OUP MP to Kyiv in comfort.

Human rights activists have expressed concern over the Interior Minister’s order that police prevent the procession from entering Kyiv by foot.  While it is extremely contentious and widely viewed as having, at very least, a political component, only a court can ban a peaceful gathering.  For this reason, Oleksandra Matviychuk, head of the Centre for Civil Liberties suggests that the Minister Arsen Avakov exceeded his authority.  The same view was expressed earlier by Mykhailo Chaplykha from the Human Rights Ombudsperson’s Secretariat.

Avakov announced the effective ban on the procession entering Kyiv on foot on July 26.  He asserted that it was prompted by security concerns, with his advisor MP Anton Gerashchenko producing photos of the grenades and dummy explosive devices he said were found on the road that the participants were due to walk through.

The day before activists against the Moscow patriarchate had threatened to prevent the procession from passing, and groups of activists have for some time been setting up camp in preparation.

At a press conference on Tuesday Avakov explained that agreement had been reached that the participants would stop at the entry to Kyiv and be taken to the centre by coach.

The actual prayer gathering on Volodymyr Hill has not been banned, and Avakov insists that the police will ensure believers’ safety, including through the use of metal detectors and inspection of all bags.

The action, purportedly to pray for peace and prosperity for Ukraine, has been viewed with growing concern and suspicion.  These were only exacerbated by reports, for example, from Kharkiv that the participants in the procession had included men in camouflage gear, some of a suspiciously athletic appearance (normally indicative of ‘titushki’ or paid thugs) and the orange and brown St George ribbons widely associated with support for ‘Russian world’ and the Kremlin-backed militants in Donbas.

Political analyst Oleksiy Haran believes that the actions of the Ukrainian Orthodox Church under the Moscow Patriarchate demonstrate that they are serving Russia, and points to what he calls overt politicization behind this supposed religious procession.   He suggests that the law enforcement bodies could have nipped the whole thing in the bud, though the methods he suggests are a little questionable.  He talks of finding “means of influence” and notes that there is compromising information against many of the officials from the UOC MP with the Church itself having ‘certain business interests’.

The Moscow Patriarchate has increasingly been seen as isolated from all other religious confessions in Ukraine in terms of its attitude to Russia’s aggression.  Although officially it condemns all violence in Donbas, it has never taken a stand condemning the aggressors, and at least individual priests are believed to have supported the Kremlin-backed militants (see ‘Russian World’ and Religious Persecution in Donbas).

Denis Kazansky, a prominent journalist originally from Donetsk, is totally sceptical about the proceedings and the coaches laid on.  He believes that we should call things by their real names and that this is a normal political rally with people being brought in to Kyiv.  Whose money is being used would then be only one of the questions around this event.

Patriarch Sviatoslav, Head of the Ukrainian Greek Catholic Church, has stressed that it is only the secular aspects of the procession which are of concern.   He recalls the use of “men, women and children as human shields for armed criminals” during the early stages of the military aggression in Donbas.  Such behaviour, he says, is the height of cynicism, and many now fear that the participants in the procession are also being used as a tool for some undeclared goal. Patriarch Sviatoslav strongly urges all of those who consider themselves Ukrainian patriots to refrain from any attempts to obstruct the believers.  This, he says, is only playing into the hands of Ukraine’s enemies.

Whatever the suspicions, the believers are exercising a right all citizens have, and the threats from some ultra-nationalist groups to stop them are just as inappropriate as the same groups’ wish to prevent the Equality March in Kyiv this year.  Some methods of obstruction are already being applied.  In Odesa, for example, Automaidan activists are reported to have ‘persuaded’ transport firms to not drive people wanting to take part in the procession to Kyiv.   The forms of persuasion are left to our imagination.

Such forms of obstruction carry unfortunate associations.  Under the regime of Viktor Yanukovych, the Moscow Patriarchate came close to being treated as state religion (which is prohibited by Ukraine’s Constitution).  Suspicions about the current procession across Ukraine have been further fuelled by the participation of some politicians and a journalist Viacheslav Pikhovshek who were closely associated with the Yanukovych regime.

Patriarch Kirill, as head of the Moscow Patriarchate, visited in July 2010, soon after Yanukovych’s election, and was given a near-state visit welcome.  This was the first time under Yanukovych’s presidency that the traffic police were used to obstruct people’s freedom of movement and assembly.  This was to become frequent, culminating in the open persecution during Euromaidan.

In July 2010, many believers of the Orthodox Church under the Kyiv Patriarchate were effectively prevented from reaching Kyiv by the traffic police.  They put pressure on transport firms and sometimes simply stopped entire coachloads. Many were stopped several kilometres from the city and prevented from travelling any further.  It would be ironical if activists who were themselves at the butt of such inadmissible behaviour from the authorities resorted to the same methods themselves.  Even if the organizers’ motives may be in question, it is likely that many of the believers who have taken part in this event are genuinely taking part in what, for them, is a pilgrimage.