A British Foreign Secretary who excuses Russia’s invasion of Crimea?Kremlin’s Donbas proxies congratulate UK for ’doing what they did’ & voting for BrexitBrexit a gift to Putin, the far right & Trump, a blow to democracyEx-Mayor of London Boris Johnson blames Russia’s annexation of Crimea on the EUWhat European Values if Dutch Referendum Result Stands?Appeal by the leaders of Ukrainian national communities to the Dutch populationFormer Soviet political prisoners call on Holland to say yes to Ukraine’s European futurePlaying with fear and ignoranceHow a democratic tool became a threat to democracyUkrainian Jewish leaders appeal to Holland: Give our country the chance to break with the pastDutch referendum puts Ukraine in spotlightMark it down, Mr Trump, Russia has already gone into UkraineFrench Collaborators Kiss Monument to Russian Invaders of CrimeaUK university denies any part in Russia’s latest Crimea propaganda stuntFrench MPs paid from Russian coffers for Crimea propaganda trip?Les collabos français embrassent le monument aux envahisseurs russes en CriméeRussian invaders sentence elderly Ukrainian woman to 12 years on ‘treason’ charges Russian occupiers of Crimea puts 66-year-old Ukrainian on trial for ‘state treason’Moscow’s proxy ‘republics’ announce that Donbas is and always was ‘Russian’Belarusian Police Detain More Than 90 As Protests Enter 11th Week
• Topics / Politics and human rights 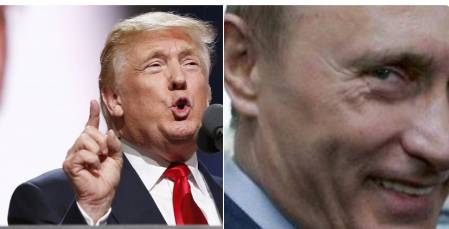 Donald Trump did not just call on a hostile state to hack a presidential candidate’s emails on Wednesday.  He also said that, if elected US President, he would consider removing the sanctions against that same nation for its aggression against Ukraine and recognize Crimea, which Russia invaded and is occupying, as Russian territory.

If his invitation to hack has understandably caused outrage and accusations of treason, the contempt the Republican Party’s presidential candidate showed for international law with respect to Crimea was taken far less seriously.  Some journalists actually suggested that Trump had not understood the question put very succinctly by Mareike Aden. She writes that she asked "Would you as president want to recognize #Crimea as Russian, lift sanctions?" - "Yes we would be looking at that"

Clearly the promise to “look at that” cannot be considered a definite statement of his intention to recognize Russia’s internationally condemned land-grab and continue with business as usual.  On the other hand, there is absolutely no reason to believe that this is not what Trump, if elected, would seek to do.  Certainly Andrei Rostenko, de facto mayor of Russian-occupied Yalta seemed in no doubt when in October 2015 he invited Trump to visit Crimea “after your victory in the elections”.

“We are following the election process in your country with great interest. We like your political program and you as an outstanding individual. After your victory at the elections, you plan to establish friendly relations with President Vladimir Putin – that is a marvellous decision”, Rostenko wrote.  He wishes him a comfortable victory and suggests that maybe one day a street will be named after him “for his inestimable contribution to restoring friendly relations with our people”.

Russia regularly exaggerates the visit of any pro-Kremlin, generally far-right politicians to Crimea in the hope that this will con people into believing that Russia’s annexation of Ukrainian territory has been accepted.  An invitation letter does not in itself prove anything, but it does make it worth probing.

You don’t have to look very far.  On July 31, 2015, Trump called Crimea “Europe’s problem” and said that “the U.S. should only step in on Crimea if European countries ask for help”.

In September 2015 he took a similar line, while rather bizarrely claiming that Russia’s aggressive policy in Ukraine was because "there is no respect for the United States.", with Putin not respect US President Barack Obama.

He refused to promise more US support for Ukraine, saying that this was Europe’s responsibility.  Earlier in the summer, he was fulsome in his praise of Putin, telling Fox News host Bill O’Reilly “You can make deals with those people. Obama can’t …. I would be willing to bet I would have a great relationship with Putin. It’s about leadership.”

He was still just as charmed by Putin on Dec 18 last year.  In response to an NBC presenter’s comment that Russian President Vladimir Putin is a leader who kills journalists, political opponents and invades countries, Donald Trump stated “well, he’s running his country, and at least he’s a leader … our country does plenty of killing also.”  He did not see the need to address the issue of invasion at all.

Events over the last week have fuelled fears that Trump has business or other reasons for seeking to oblige the current Russian regime.  During the Republican convention, significant changes were made to a standard platform position on providing lethal weaponry to Ukraine, and Trump has twice now placed US guarantees under Article 5 of the NATO agreement to come to other NATO members’ defence in question.

All of this is music to Putin’s ears of course.  While there is no proof that Trump or his people had anything to do with the hacking of Democrats’ emails, the fact remains that there is significant proof that this was carried out by those working for the Russian state.  Since they were intended to damage one candidate, it is clear that Russia is taking sides.  Instead of condemning this, Trump called on Russia to hack some more!

Trump’s praise of Putin, his apparent willingness to consider recognizing Russia’s annexation of Crimea and remove sanctions  is also profoundly shocking given the grave deterioration in the human rights situation under Russian occupation.  Since the Spring of 2014, Russia has carried out a policy of repression against all opponents of annexation; has severely curtailed all rights and freedoms and imprisoned people on politically motivated charges.  It has effectively declared war against the Crimean Tatars, the main indigenous people of the peninsula and is carrying out a policy of terror and intimidation.  One Crimean Tatar leader, Akhtem Chiygoz, is facing a long sentence on absurd charges relating to a pre-annexation demonstration over which Russia has no jurisdiction, while another Ilmi Umerov could also end up imprisoned for 5 years over a broadcast in which he spoke of how Crimea must be returned to Ukraine.  This, in Russian Newspeak, supposedly constituted “public calls to action aimed at violating Russia’s territorial integrity.

Judging by the first reports of Trump’s response about Crimea, it seems likely that the full impact of Trump’s words will not be universally understood.  Yes, Russia’s invasion and occupation of Crimea has long ceased to be a headline, but that does not make it any the more legal.  Trump’s willingness to recognize Crimea as Russian would be in direct breach of a UN General Assembly Resolution which the USA endorsed back on March 27, 2014.  That, and the US removal of sanctions, would also be a clear message to Russia that it can invade another country’s territory with impunity.  With Russia still heavily arming and manning its undeclared war against Ukraine, this, together with Trump’s threats regarding NATO, would be a devastating blow to all of Russia’s neighbours in Eastern Europe.