Impunity in Ukraine in the assessment of western human rights activists 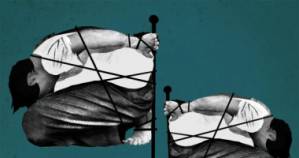 This very important report shows flagrant rights violations in Ukraine by both sides in the military conflict and impunity for perpetrators of grave or very grave crimes.  The impunity provokes more such crimes, setting in motion a spiral of violence which is a very dangerous trend for the future of Ukraine.

There must therefore thank our western colleagues for drawing the attention of the Ukrainian authorities, public and the world to such serious rights infringements and effective encouragement of impunity. Perhaps the Ukrainian authorities will listen better to international rights NGOs, than to domestic ones that constantly report these violations and try to defend their victims.

However this report has aroused mixed assessments in Ukrainian society. Many were irritated and even offended, considering the report to be lacking in objectivity and biased.

Information about the actions of both sides in the conflict is provided as symmetrical.  The very cover of the report is a mirror image of a man tortured. The means of torture on both sides are indeed almost identical since the background of the perpetrators is similarly Soviet. Torture was legalized in 1937 through a special order from Joseph Stalin and 24 methods of torture were passed from generation to generation of law enforcement officials.  9 cases of torture by agents of the Ukrainian government, and 9 by militants from the so-called ‘Donetsk and Luhansk people’s republics’ [DNR, LNR] are described in detail without any attention to the difference between those terrible events taking place on territory occupied by the militants or under Ukrainian government control.

This difference is huge but is unfortunately not at all reflected in the report by AI and HRW.

1.  Such actions on government-controlled territory are qualified as grave or especially grave crimes and the victims can lodge complaints, with the crimes then having to be registered and investigated. The military prosecutor initiates criminal proceedings against those accused of such crimes and usually the latter are remanded in custody.  It is true that this does not guarantee that those prosecuted are really the culprits.  Innocent people sometimes end up in custody while the perpetrators remain at liberty. The problems of ineffective investigation into crimes, including torture and disappearances, remain unresolved, however it cannot be asserted that there is total impunity.

Nothing of the sort can be said about DNR / LNR where such actions are not viewed as crimes and where you can’t even complain since those who killed, tortured, tormented and abducted people are now part of the so-called people’s police. This people’s police is not about to prosecute itself!

2.  There is also a big difference in the scale of these crimes. According to human rights activists’ estimates, over 5, 200 people have been victims of such crimes on occupied territory, and this is not a final figure. We cannot give an exact figure for the number of victims on government-controlled territory. According to all available estimates, there have been several dozen victims although I think it likely that the final figure will be higher. Nonetheless we are not talking about thousands or even hundreds.  Of course, from the point of view of the issue of impunity, this is of no importance.  It is still bad if a person remains unpunished whether they tortured one person or many.  However, the large number of victims has a serious impact on the psychological stage of a large number of people and of society as a whole.  The more victims, the more suffering, the greater and more intense the loss of health, and in particular, the psychological trauma. In my opinion, it was improper to not even mention the differing scales of these crimes in the report.

3.  The authors of the report, in my opinion, were simply obliged to mention that Russian soldiers and Russian security service officers had taken part in the torture, and that prisoners had been taken to the territory of the Russian Federation and tortured there.  Such cases are documented in the report “Surviving Hell” which was prepared by a coalition of Ukrainian rights organizations “Justice for the Sake of Peace in Donbas”.  That report was the result of a detailed analysis of 165 cases of unlawful deprivation of liberty, detention and torture. It was presented in Brussels, Strasbourg, Berlin, Paris, Warsaw, Prague, in the embassies of most EU members in Ukraine.  The UN circulated it by its channels, and the respected international rights organizations could not have failed to be aware of its contents.  These are just a few quotes:

“The testimony of 44% of the victims questioned suggests that they were personally in contact with no less than 58 mercenaries from the Russian Federation, as well as acting RF military servicemen who played a leading role in carrying out interrogations and guarding places of confinement”;

“Among the people who carried out interrogations separately, one should particularly mention those whom the respondents themselves called RF military servicemen. According to the respondents, they either introduced themselves (for example, as an FSB officer) or they could be identified by the chevrons of the Russian Federation Armed Services or their conversations (where they named the city where they lived in Russia); their specific ethnic group (Buryats, Chechens, Osetians) and so forth”.

“One should note the interrogations and torture of people detained on the territory of Ukraine were carried out on Russian territory. Given the small number of respondents, we are unable to give an objective conclusion about how widespread such practice was. At the same time the cases recorded indicate a direct link between the illegal armed formations of the so-called DNR and LNR and state bodies of the Russian Federation.”

4.   The conditions on occupied territory were much worse than on areas under Ukrainian government control. It is easy to observe on videos of exchanges that Ukrainian POW and hostages were very thin, could scarcely move and had to support each other, which prisoners from government-controlled areas looked basically fine.

AI and HRW, while wishing to be objected and impartial, proved biased. I would, nonetheless, like to thank them for their attention to Ukrainian problems in the area of human rights. The recommendations to the Ukrainian authorities presented in the report by our western colleagues are exact and important, and I’m sure that Ukrainian human rights activists would agree with them.