No surprises as Trump says he could recognize Crimea as ’Russian’ & lift sanctionsA British Foreign Secretary who excuses Russia’s invasion of Crimea?Kremlin’s Donbas proxies congratulate UK for ’doing what they did’ & voting for BrexitBrexit a gift to Putin, the far right & Trump, a blow to democracyEx-Mayor of London Boris Johnson blames Russia’s annexation of Crimea on the EUWhat European Values if Dutch Referendum Result Stands?Appeal by the leaders of Ukrainian national communities to the Dutch populationFormer Soviet political prisoners call on Holland to say yes to Ukraine’s European futurePlaying with fear and ignoranceHow a democratic tool became a threat to democracyUkrainian Jewish leaders appeal to Holland: Give our country the chance to break with the pastDutch referendum puts Ukraine in spotlightWhy a Trump Victory Would Put Ukraine in Danger. In Trump’s Own WordsRussia: Journalist Zhalaudi Geriev Punished for Chechnya ReportingPaul Manafort Is the Tip of the IcebergRussian invaders sentence elderly Ukrainian woman to 12 years on ‘treason’ charges Russian occupiers of Crimea puts 66-year-old Ukrainian on trial for ‘state treason’Moscow’s proxy ‘republics’ announce that Donbas is and always was ‘Russian’Belarusian Police Detain More Than 90 As Protests Enter 11th WeekPunitive psychiatry used against blind political prisoner in Russian-occupied Crimea
• Topics / Politics and human rights

Mark it down, Mr Trump, Russia has already gone into Ukraine 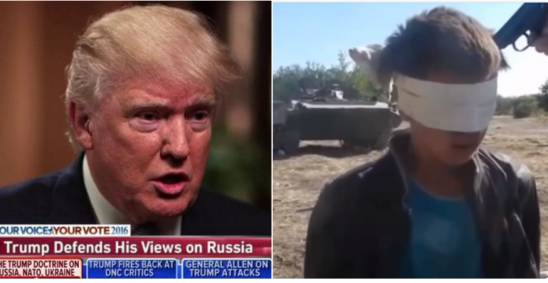 Considering his multiple advisers with strong Russian links, US presidential candidate Donald Trump has proven disturbingly ignorant about Russia’s aggression against Ukraine - both Crimea & Eastern Ukraine,  and seems quite indifferent to international law if a good deal can be struck with Russia.  He displayed this ignorance during an interview given to ABC’s George Stephanopoulos and broadcast on July 31.

He was wrong at all levels, though the US media have mainly focused on his denial of one historical fact – Russia’s invasion and occupation of Crimea.  In trying to deny any involvement in the turn-around with respect to Republican policy on lethal weapons for Ukraine, which his people had forced through during the Republican convention, Trump said the following about Russian President Vladimir Putin:

Reminded that “he’s already there”, Trump’s response was somewhat baffling to the uninitiated.  “OK, well, he’s there in a certain way. But I’m not there. You have Obama there. And frankly, that whole part of the world is a mess under Obama….”

Does that mean that the ‘mess’, otherwise known as Russia’s invasion and occupation of Ukrainian Crimea, is Obama’s fault?

Trump had already stated recently that he would “be looking at” recognizing Crimea as ‘Russian’ and removing sanctions.  American Ukrainians still eager to support Trump were quick to deny that he had ‘really’ meant this.

He left no scope for illusion about his plans on Sunday, with the pro-Kremlin media and army of Internet trolls going wild with enthusiasm over his new assertions.

There need to be good relations with Russia, he stressed, and in his words, “the people of Crimea, from what I’ve heard, would rather be with Russia than where they were.  And you have to look at that.”

What exactly has Trump heard, and from whom?  It is not quite as critical as the tax returns that he is refusing to divulge, despite no justification, but it could prove just as telling.

One assumes that Trump is referring to the pseudo-referendum on March 16, 2014 three weeks after Russian soldiers seized control in Crimea and installed pro-Russian ‘leaders’.   That event has never been recognized by any democratic country, and with good reason.  This was not only the fact that people were ‘voting’ surrounded by armed soldiers and paramilitaries, with the latter having already abducted and tortured to death at very least one peaceful protester Reshat Ametov.  The ‘referendum’ gave two options, with neither being to retain the status quo, and one referring to something few people would have understood.  The so-called ‘observers’ were brought in by Russia from far-right or neo-Stalinist parties known for their unwavering approval of everything Moscow does.  This spectacle was condemned by USA, EU countries, the European Parliament, the OSCE and Ukraine’s two main election watchdogs.  Even Putin’s own Human Rights Council found that the turnout been much lower than reported, and the results far less overwhelmingly in favour of joining Russia. It considered that the turnout for all of Crimea had been only 30-50%, with only 50-60% of those voting to join Russia.

Trump’s willingness to recognize Russia’s land-grab is radically at odds with the position taken by the USA as a whole and by his own party.  It is also in breach of the UN Resolution on Crimea from March 27, 2014, which the US supported, together with all democratic countries.

His stance would also make a nonsense of the sanctions which the US has imposed, but Trump has already indicated that he would want to remove those.

This, however, is nothing new.  BuzzFeed’s Andrew Kaczynski has posted a video (https://twitter.com/BuzzFeedAndrew/status/759777256885682176 ) from 2014 which indicates how very little Trump needs to decide that people want to be invaded.  This is what the 2016 presidential candidate had to say two years ago:

“Russia is like, I mean, they’re really hot stuff.  And now you have people in the [sic] Ukraine, I mean, set up or not, it can’t all be set up, they’re marching in favour of joining Russia. I mean, you know, you can send some people in”.

You can indeed send people in.  Aside from the soldiers and other fighters used to occupy Crimea, Russia sent great numbers to eastern Ukraine.  In March it was still just young thugs deployed to help a few marginal anti-Maidan and pro-Russian locals to seize control of administrative buildings.  That didn’t work, even in the Donbas and Luhansk oblasts, and so real fighters with sophisticated weapons were used.  The militants who first seized control of Sloviansk and then formed the so-called ‘Donetsk people’s republic’ were led by Russians – Igor Girkin [nom de guerre Strelkov] who played a major role in the taking of Crimea, Alexander Borodai and others.  They were backed by huge numbers of mercenaries from various parts of the Russian Federation and some volunteers.  The weapons provided were sophisticated, with this tragically including the Russian BUK surface-to-air missile used to down a Malaysian airliner over Kremlin-backed militant-held territory on July 17, 2014.  This is just one of numerous war crimes committed.  According to a survey carried out by human rights groups of former hostages or POW, over 40% of the so-called ‘interrogations’ and control had been undertaken by mercenaries from the Russian Federation or people who identified themselves as Russian military personnel.  There is considerable evidence also of extrajudicial executions and horrific deaths through torture.

Ukraine’s armed forces had been gravely eroded under the regime of Viktor Yanukovych, but by August 2014 it seemed only a matter of time before Ukrainian volunteer battalions and soldiers were able to defeat the militants.

At that point, Russia dropped any pretence and began deploying significant numbers of Russian military personnel.  The first reported deaths of Russian military personnel killed fighting in Ukraine appeared in late August.  The intrepid politicians and civic activists who revealed such details were often attacked, prosecuted on trumped-up charges or otherwise harassed.  Later Putin issued an illegal decree classifying as secret information about military losses in peacetime.  One of those most active in exposing the truth about Russia’s undeclared war against Ukraine was Boris Nemtsov, who was gunned down near the Kremlin on Feb 27, 2015.  The report he was planning was eventually completed by his courageous associates.

The evidence for all of the above is overwhelming and denied only by Russia and its most committed fellow travellers.

It is normally those fellow travellers who join Russia in claiming that there was mass support in Crimea and a legitimate referendum, and who deny Russian involvement in eastern Ukraine.  That involvement is ongoing and deadly, and Russia and the Kremlin-backed militants have yet to honour any part of the Minsk Agreement.

Trump is saying that none of this matters, and proposing business as usual with Russia.  That is a terrifyingly nihilistic attitude sending a dangerous message to Russia and all aggressor states.